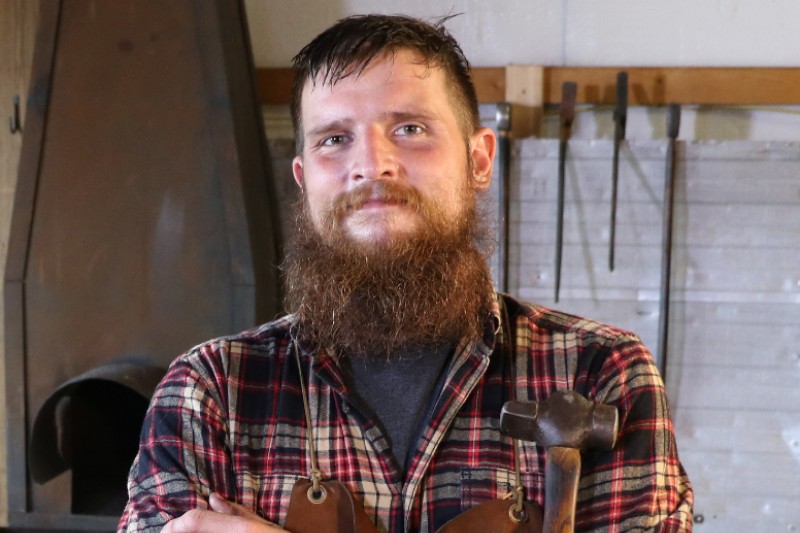 “Making” host Matt Burchett has worked in construction and other fields using his hands and developing skills before finding his place at the anvil as a blacksmith.

WARRENSBURG, MO - The KMOS-TV production “Making” was recently recognized by the Mid-America Chapter of the National Academy of Television Arts and Sciences (NATAS) with nominations for two programs from its inaugural season. Winners in the myriad categories for programming, news, sports and special achievement will be announced at the 44th Annual Mid-America Emmy® Awards Ceremony, which will be streamed online at 7 p.m. Nov 21. It will be available through YouTube, The Emmys® App, and TheEmmys.tv.

“Making” premiered in October 2019 and was created by the University of Central Missouri’s public television station to introduce viewers to talented artisans, makers and crafts folk working in Missouri. KMOS producers Roy Millen, Christy Millen and Eric Boedeker traveled much of the state in 2019 to highlight just a few of the talented Missourians who are creating beautiful art, useful devices, delicious food and much more. The six-part series is hosted by blacksmith Matt Burchett.

One story, nominated in the Informational/Instructional Story category, featured the Thunder Lodge Trading Company in Arrow Rock, Missouri. This category recognizes excellence in a feature or segment from a presentation of stories whose prime purpose is to teach formally or informally about a subject. In the
Lifestyle Program category, awarded for excellence in a program, series or special that deals with everyday life subjects, “Making” episode #103 was nominated. It included feature stories about the Kansas City R-2 Builders Club, a family of farmers who became cheesemakers, the Public House Brewing Company and artist Sarah Nguyen, who taught art at UCM between 2009 and 2018.

About KMOS-TV
KMOS serves the citizens of 38 central Missouri counties with high-quality, educational content and experiences online, over-the-air and in our communities. KMOS is integral to engaged learning as a professional learning lab for students from a variety of disciplines at the University of Central Missouri. The station broadcasts programming on four channels throughout the region with programs for all ages on 6.1, lifestyle and how-to programs on 6.2, international news and dramas on 6.3, and a full schedule of kid’s programming to fit the schedule of every busy family on 6.4.

Judging Procedures
All entries will be judged by panels assembled by other NATAS Chapter, comprised of no fewer than seven judges who shall be certified as peers. No more than three judges on a panel may be employed by the same station or company. Judges may not have a conflict of interest, which is described as having a direct involvement in the production of an entry, or having a personal relationship with a member of the production staff of an entry. KMOS staff members do join panels to judge entries only from other Regional NATAS Chapters.