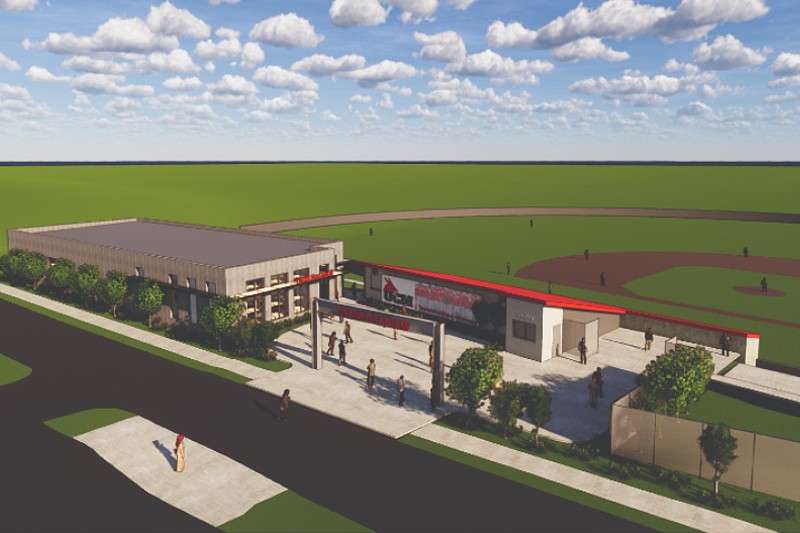 WARRENSBURG, MO – An expansion and improvement project at the home of the University of Central Missouri Mules baseball team is moving forward thanks to financial support from donors and recent action taken by the university’s governing board.

When the Board of Governors met Oct. 22, it unanimously approved the award of a contract to Kansas City firm McCownGordon for construction services at James R. Crane Stadium at Tompkins Field. The board authorized paying up to $2,090,000 for the project which includes a new 2,500-square-foot concrete and steel locker room and players lounge facility, new restrooms, and a new entry plaza.

“We have about 65 young men in the baseball program right now,” said Jerry Hughes, vice president of Intercollegiate Athletics. “One reason for the locker room addition is so that we can house them, as we are currently in a much smaller locker room space. This is important for the baseball program, but also important for university enrollment to have that many people involved in the program.”

Hughes added that the locker room facility expands the opportunity for players to prepare for each game. The configuration of 44 lockers lining the perimeter of the locker room walls is similar to what is found in Major League Baseball stadiums. He said the entry plaza will be built on the west side of the stadium to create a more welcoming space for Mules baseball fans and visitors to the stadium.

The UCM Alumni Foundation has been engaged in fundraising efforts for this project and will utilize approximately $1.81 million in donated funds to pay for approximately 87 percent of the cost. The projected $280,000 in remaining costs will be covered by university funds.

A major gift from the stadium’s namesake, James R. Crane, owner of the Houston Astros, is making this project possible. Crane is a 1976 UCM alumnus and former Mules pitcher whose generosity over the years has made numerous stadium upgrades possible.

“Jim Crane’s lead gift of $1.5 million for this project once again shows his commitment and love for the Mules baseball program and the University of Central Missouri,” Hughes said.

The university also received private funding from the Sunderland Foundation, Overland Park, Kansas, which is helping to cover some upgrades at the stadium.

In addition to this project, as part of overall stadium improvements, the Alumni Foundation recently devoted $393,700 in private funds to cover architectural and engineering final design, construction drawings and documents, a topographical site survey and bleacher replacement on the first--and third-base sides. This makes possible new permanent stadium seating for 215 people on the first-base side of Crane Stadium, and installation of another 215 stadium seats on the third-base side to replace existing seats which have faded over the years. Each of these seats will be red with cupholders and will feature the Mulehead logo.

The Mules baseball team has played at the current location since 1976. The facility was named in honor of Crane in 1998 following a $1.2 million construction project that he funded. This added a locker room and coaches’ offices for the Mules, a dressing room for umpires, new dugouts, permanent seats, a concession stand, a press box and lights to the already existing playing field.

During fall 2004 semester, a new facility was added to include indoor batting cages and bullpens, a weight room, storage facility, and umpires dressing room. In 2006, permanent seatback chairs were installed for Mules fans, all funded by Crane. In summer 2013, the stadium received another upgrade with the installation of a new grass playing surface, and in fall 2015 a $1.1 million project primarily funded by Crane led to the current AstroTurf synthetic playing surface which was completed for the Mules’ first home game in 2016. The field was officially dedicated during that game.

Throughout the years, the Mules baseball team has been a top competitor in collegiate sports, having claimed 27 MIAA championships and two NCAA II baseball championships, 1994 and 2003.

The UCM Alumni Foundation continues to raise funds to support capital development projects such as the stadium as well as numerous other facilities and opportunities that enhance the educational experience and benefit university students. Learn more by contacting Courtney Goddard, vice president for University Advancement and executive director of the UCM Alumni Foundation, at cgoddard@ucmo.edu.