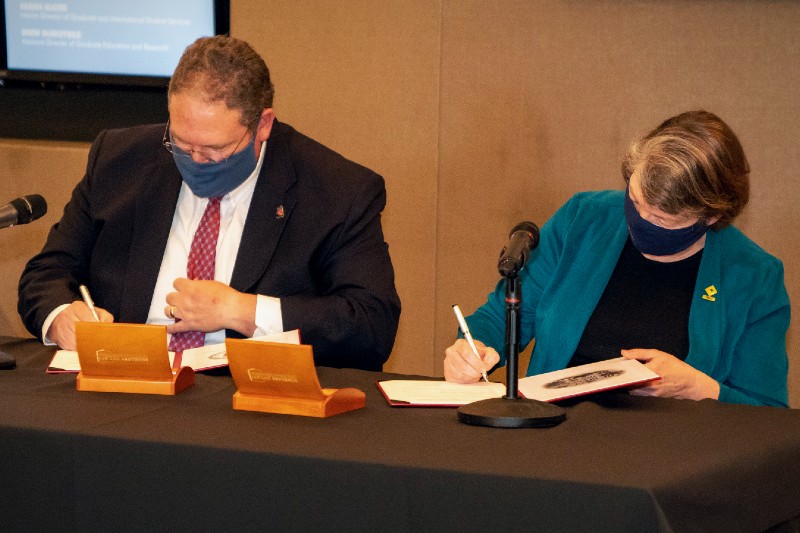 Phil Bridgmon, left, University of Central Missouri provost and vice president for Academic Affairs, and Barbara Glesner Fines, J.D., dean and Rubey M. Hulen Professor of Law at the University of Missouri-Kansas City, sign an agreement that creates a new pathway for UCM students to pursue a law degree faster and at less cost than a traditional educational pathway.

WARRENSBURG, MO – A collaborative agreement between the University of Central Missouri and the University of Missouri-Kansas City School of Law makes it possible for UCM students to complete a law degree approximately one year faster and at less cost than a traditional pathway.

The Memorandum of Understanding (MOU) establishing the Three + Three accelerated admissions pathway for undergraduates to pursue a graduate education at the UMKC School of Law was signed during a ceremony Nov. 5 at UCM. Adding their signatures to the document were Phil Bridgmon, Ph.D., UCM provost and vice president for Academic Affairs, and Barbara Glesner Fines, J.D., dean and Rubey M. Hulen Professor of Law at the UMKC Law School.

This is the second MOU UCM has entered this fall to create a new pathway to a law degree. In October, the university announced a similar program with University of Missouri-Columbia (MU) School of Law.

“This is a benefit to our students,” Bridgmon said, speaking to an audience that included UCM students, as well as faculty, staff, administrators and alumni of both institutions. “This will be a pathway that helps you bridge your work here at UCM with your careers and professions that you hope to engage in. I appreciate everyone’s support on this, and I look forward to our continued partnership between UCM and UMKC.”

The agreement allows high-caliber, highly motivated students who have completed three-fourths of their bachelor’s degree credits to apply for admission to the UMKC School of Law. If accepted, they will enter the three-year law school program after completing their junior year at UCM, thereby reducing their academic journey to becoming a lawyer by one year. After completing first-year law courses, students utilizing this pathway will then have their UCM degree conferred. The agreement does not change existing admissions requirements or procedures for admission to law school.

“At UMKC Law School our mission is to be student centered, community connected and justice driven, and this agreement is part of that mission,” Glesner Fines said.

In her remarks, Glesner Fines recognized the role lawyers play in helping the nation to be more justice driven, and the value of being connected with UCM and the Warrensburg community. She also stressed the importance of “connecting with students before they come to law school so they can see the path clearly and be able to achieve their goals with a lot less angst and a lot more effectiveness.”

The Three + Three Program is open to all UCM majors, and requires the following from students who seek admission:

A graduate of the MU School of Law, Courtney Goddard, J.D., vice president for University Advancement and executive director of the UCM Alumni Foundation, worked with the university’s Academic Affairs division to establish the MOU. She emphasized the value of such partnerships as a way to expedite preparation of high-caliber, qualified professionals in a needed field.

“This Three + Three agreement between UCM and the UMKC School of Law will provide a direct pipeline for some of our most talented and ambitious students to achieve success even faster. Agreements like this serve the interests of both institutions, and ultimately benefit the entire community by producing even more legal professionals to serve it,” she said.

While the university does not offer a law degree, it does provide a pre-law (non-degree) program that will help students study law from a variety of perspectives and disciplines and obtain a solid introduction to the field. Political Science, Criminal Justice and Criminology, and Business Law collaborate to provide a diverse practical orientation to the study of law. A solid base also is provided through the Legal Studies Minor and other experiences. Most legal classes include a diverse group of majors with varied interests; law school, public office, business leaders, and many others.

To learn more about the Three-Three J.D. Program, contact Benecia Carmack, assistant professor of criminal justice and criminology and pre-law student advisor, at bcarmack@ucmo.edu or 660-543-4950.