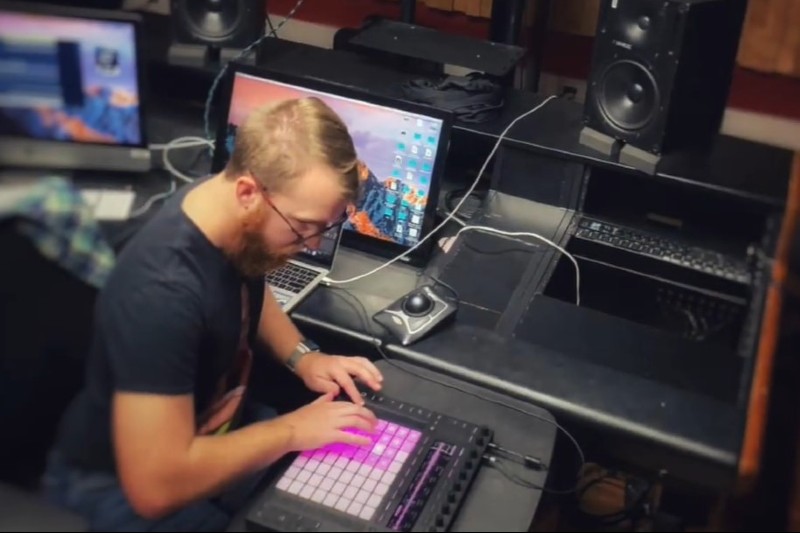 WARRENSBURG, MO - From its humble beginnings as a teacher’s college in 1871 to a comprehensive state institution, music has always been a part of the University of Central Missouri. Throughout the years, UCM has grown and developed an array of academic music programs with bachelor’s and master’s degrees in areas such as music education, piano pedagogy and jazz-commercial music. The concept of music has changed, however, since the roots were planted. In the 21st century, as new technologies emerge at an increasingly rapid pace, it becomes more important than ever to include their study in music programs. UCM is fortunate to have a Music Technology program that is nationally recognized, and within certain circles, internationally recognized.

UCM has always been a refined place of development for music educators and has grown into a reputable institution for traditional music and instrumental studies. The Music Technology program capitalizes on UCM’s historical strength as a music school by building upon instrumental studies, music education, music history, conducting and other pedagogical musical fields. It may be relatively new, but the Music Technology program stands strong with the other longstanding music degree programs at UCM.

“The idea that you could come in and say, ‘my instrument is my laptop’ opens up a whole world of things for me as a music educator,” said Bickmore, “I hope that [idea] can trickle down into the world of music education where a person who makes beats in their bedroom can say, ‘I want to help kids learn how to do this too when I grow up.’ So they can come to UCM and can say, ‘I can go get a degree in music education and choose a laptop as my instrument.’ I can’t think of any other place where that is possible… except for UCM.”

Honour added, “It’s not just laptops. The very first year we started, the first performance that we put together was a performance of this piece called ‘In C’ by Terry Riley, which is for any instruments that you want to play. One of our students hacked an old Nintendo Game Boy and performed his part on that.”
While traditional music is a fundamental part of Music Technology, students in this academic area also analyze and create with differing concepts of sound as they may be used in professional environments.

“If it involves sound and technology in any way, shape or form, then we cover all of that. So we certainly cover music production but we also teach audio for film, audio for games, audio for theatre and sound design,” Honour said.

According to Honour, music technology studies at UCM may even include application development and computer programming that is related to the intersection of sound and technology.

“We internally have a broad approach to it with the idea of preparing our students for a wide variety of careers post-graduation as well as a wide variety of means of becoming practicing artists and creative professionals themselves,” Honour remarked, “[This includes] focusing on sound and then spilling over into all the different ways that sound intersects with other creative fields these days.”

Music Technology has provided many UCM students with opportunities out of state, and internationally, through internships and capstone studies. This includes opportunities such as studying abroad at prestigious institutions such as the Institute for Research and Coordination in Acoustics/Music in France and enabling students to achieve official L-Acoustics certification.

In addition, students graduating from the music technology program have a wide variety of career opportunities from outside the music industry, according to program faculty. The film and game industries are all potential employers of Music Technology graduates. Students enrolled in the program have found success from recording music and reinforcing live sound to designing elaborate sound systems. In fact, several program alumni are working in the Kansas City area. Kaiser recalled, for example, walking through the Country Club Plaza one Thanksgiving, and while taking photos of the huge array of outdoor speakers he was approached by the sound engineers installing them: it turned out they were all graduates of UCM’s Music Technology program.

Music Technology offers robust coursework for music and music technology studies. In some courses, such as Digital Audio Production, students will learn how to use industry-standard software and hardware to produce music and other sounds. Other courses in the program teach students how to market themselves in the music industry, design sound for non-music mediums, and to develop many additional skills.

Students enrolled in the program also have 24/7 access to state-of-the-art equipment and software. Multiple fully equipped recording studios are on campus, in addition to countless pieces of equipment available for students to check out, including professional-grade microphones that are used in the most sophisticated environments.

“One of the things that I found attractive when interviewing to work here is Dr. Honour’s vision, this very broad view of what we are preparing students to do. We can prepare them to be professionals in a studio environment working with the standard tools and we can also teach them to be individual performers with idiosyncratic practices,” Kaiser said. “From corporate positions to entrepreneurial career paths, our goal is to give them the skills needed to pursue all of these options.”

Music remains a growth industry with music technology career paths powering the backbone of that industry. Honour and the Music Technology faculty have recognized this and are continuously developing the program. They have even begun to offer music technology studies at the graduate level. Honour and the program faculty also hope to recruit more students who have a passion for music, but may not necessarily want to enroll in traditional music studies.

Honour noted, “When you look across the population of high school students and you ask them how many of you are interested in music, you get virtually a 100 percent reaction. They are all interested in music and they are all interested in making music. But then you look at how many of them are enrolled in band, orchestra, or choir and it’s about 20 percent of them. So what's happening to the other 80 percent of students? Well, they still want to make music and if we had some sort of avenue for them to make music, especially like the music that they listen to, we can reach the other 80 percent of students. I think equipping people with the technology is a big, big part of it.”

The music technology program also continues to develop relevancy with other music programs such as music education, a program that continues to attract students today.

“I tell a story to students all the time about a teacher I knew from Arizona, who started as an orchestra teacher and then saw that there were funds available for technology courses,” Bickmore recalled, “and that class filled up, and the next year they asked him to offer another class, and the year after that he was teaching another section. It turned out that after four years he was not teaching orchestra anymore and they had to hire another orchestra teacher because he had created, out of nothing, a music technology program.”

As UCM prepares for its 150th anniversary, Music Technology has added an innovative touch to a longstanding academic program that will serve students and meet industry needs for decades to come. To enroll in the Music Technology program or receive more information, visit the program’s web page or contact Kaiser at jkaiser@ucmo.edu.