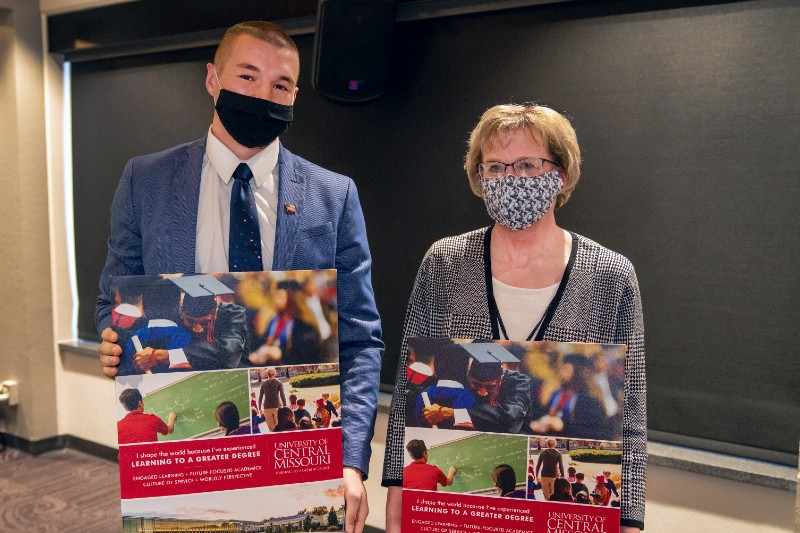 Setting examples for others to emulate, Justin Cobb, left, a senior political science major from Taos, Missouri, and Ann McCoy, Ph.D., associate dean of the College of Education, received Learning to a Greater Degree Awards for the fall 2020 semester during the December meeting of the University of Central Missouri Board of Governors.

WARRENSBURG, MO – The University of Central Missouri honored Ann McCoy, Ph.D., associate dean of the College of Education, and Justin Cobb, a senior political science major from Taos, Missouri, as recipients of Learning to a Greater Degree (LTAGD) Awards during the Board of Governors’ meeting in December.

Learning to a Greater Degree conveys the essence of UCM as an institution which promises students the opportunity to experience engaged learning, future-focused academics, a worldly perspective and a culture of service. Members of the UCM community who are nominated for LTAGD Awards support these reasons to believe and give life to these promises. Individuals recognized are honored publicly by the governing board and have their names added to a plaque displayed in the lobby of the Administration Building. Separate awards are provided to faculty members and students.

Susan Smedley, vice president for integrated marketing and communications, announced the award winners and provided information during the board meeting about why each recipient was selected.

Based on information provided through nominations, she said McCoy “is a leader who has had a powerful impact on UCM’s students, faculty and staff. Several themes appeared throughout her many nominations such as leadership, commitment, selflessness, inspiration, service, support, and student-centered.”

Smedley pointed out that one of the individuals who supported McCoy’s nomination noted overhearing another faculty member talking to a student who was struggling with how to pay for her textbooks. McCoy immediately looked up the student’s schedule and purchased the books with her own funds, then delivered the books to the student by the beginning of the class period.

“She didn’t just support this one student, but she does this on a large scale,” Smedley said. “She supports College of Education students through monthly messages, donuts, and candy baskets on each floor, but she also writes encouraging notes to faculty, thanking each one individually for their hard work and dedication to our students. She understands the need to recognize others for their accomplishments and often draws attention to those efforts.”

McCoy also prioritized the creation of various experiences for students, faculty, and staff in an effort to help them feel supported during the COVID pandemic. Such efforts have included weekly Mindful Messages to all education students, faculty, and staff, focusing on health and well-being. She created small task forces of faculty to create unique experiences for students staying at home so they could feel connected to UCM. She led an initiative to support freshman orientation and recruitment, including gathering videos from current students describing their experience at UCM in the School of Teaching and Learning.

McCoy works closely with the Missouri Department of Elementary and Secondary Education, and helps UCM stay in alignment with both current and future academic initiatives. She serves as UCM's College of Education representative for the Council for Accreditation of Educator Preparation programs national accreditation.

Many nominators mentioned she finds time to help with any problem that may occur in the College of Education. This includes teaching classes herself when the college could not find faculty to do it, and filling in for offices that are short-handed.

She has worked hard for years to assist college programs in getting both traditional UCM students and those coming into education as a second career certified in the best way possible, and is heavily involved with a College of Education program that helps people who are currently paraprofessionals in Missouri public school districts in acquiring their certification so they can become full-time teachers. She has worked with several faculty members to ensure these classes can be offered in a way that allow the paraprofessionals to continue to work in their field while achieving their degree.

In introducing Cobb, Smedley said his multifaceted experience at UCM includes demonstrating engaged learning, worldly perspective, and a culture of service. She added that “when reading his nomination, there were two words that came up again and again - the first word was ‘service’ and the second word was ‘others.’”

Cobb is a member of the Army ROTC program and intends to serve his country in the military after graduation. He has served as a member of the Student Government Association (SGA) every year he has been a student, and has devoted significant effort towards engaging the group in service to the larger campus community. As SGA’s president, he has overseen the shift of the group's activities to support online student engagement by holding House and Senate meetings that allow for face-to-face and virtual participation simultaneously.

Cobb worked with SGA to provide support and service for the Student Veterans Organization’s march on Veteran’s Day in 2020. He also worked with the Center for Multiculturalism and Inclusivity to provide SGA support for the “Together We Stand” event.

In addition, he serves as the student coordinator for the American Democracy Project. Through this work he collaborates with a wide array of academic programs, faculty and students, student organizations, and units on campus to offer programs and activities that politically and socially engage others. He plans a multitude of events, develops a variety of communications, conducts budget planning and tracking, gives presentations, and coordinates steering committee meetings.

During his time at UCM, Cobb has participated in multiple study abroad opportunities, and has intentionally chosen to enroll in courses that will help him better understand places, cultures, and viewpoints different than his own. His nominator stated that he “actively seeks to be a world citizen that appreciates different perspectives. He recognizes that to be an effective leader he must respect and embrace difference. He approaches new situations and dynamics with an open mind recognizing that a variety of factors can contribute to different perspectives, which do not necessarily have to result in conflict.”

Smedley said Cobb’s nominator also stated that he seeks to enhance his education and professional ability through his academic and extracurricular engagement, and strives to facilitate others in their endeavors to academically succeed and develop. “He is not only ‘Learning to a Greater Degree,’ he is leading to a greater degree.”