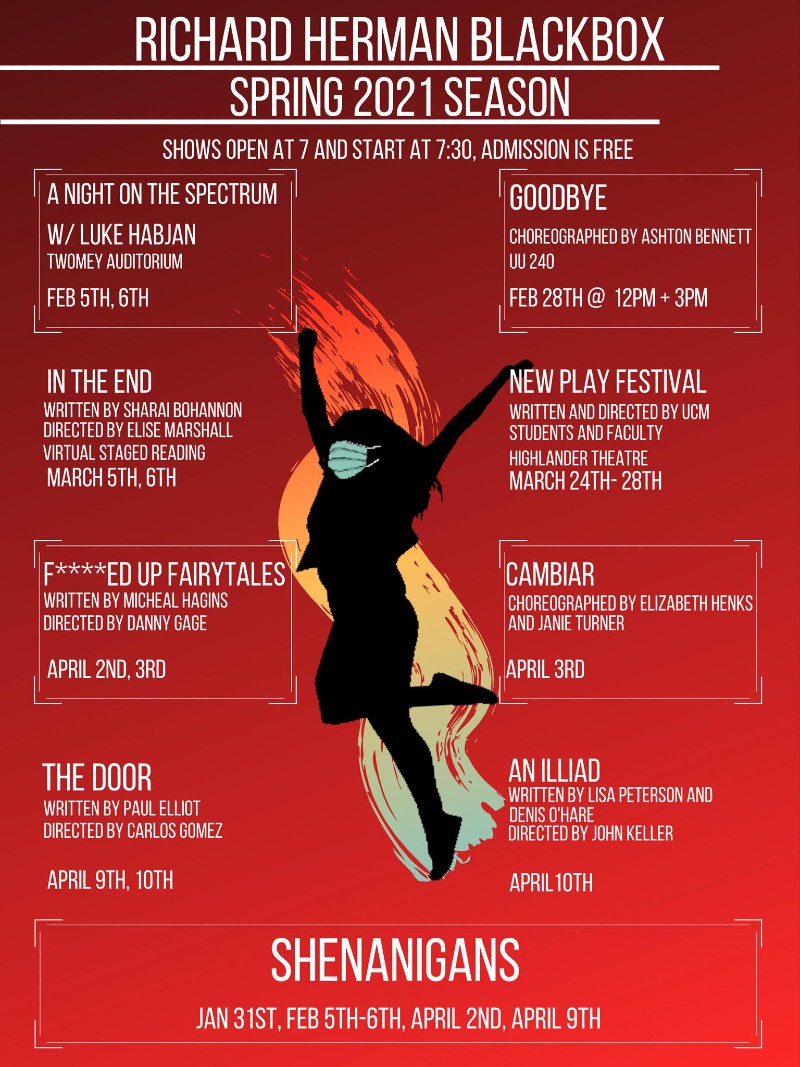 The productions for the spring 2021 season include “A Night on the Spectrum,” “Goodbye,” “In the End,” UCM Theatre and Dance New Play Festival, “F***ed up Fairytales,” “Cambiar,” “An Iliad,” “The Door,” and the Shenanigans improve team. These events aree free to the public, but seating is limited due to COVID-19 social distancing protocols. Except where noted, most of these productions take place in Nickerson Hall.

“A Night on the Spectrum,” an evening of education and entertainment by Luke Habjan, will be “a night of reflection and education to show people who are on the autism spectrum and their skills.” The show will take place Feb. 5-6 in Twomey Auditorium, located in the Wood Building. Doors open at 7 p.m. and the show begins at 7:30 p.m. Admission is free but seating is limited. Masks are required for entry into this performance.

“Goodbye,” an original dance concert choreographed by Ashton Bennett, will be an exploration of dance to the music of Billie Eilish. Performances will take place at 12 p.m. and 3 p.m. Feb. 28 in the ballroom of the Elliot Student Union, Room 240. Admission is free but seating is limited. Masks are required for entry into this performance.

“In the End,” written by UCM graduate Sharai Bohannon and directed by UCM alumna Elise Marshall, is performed in conjunction with generous UCM Theatre and Dance Alumni donors. “Emmy and Bridget continually cross paths during the worst of times. Both are on separate missions in a city where violence runs rampant. Emmy deviates from her usual routine of comforting dying people to spend more time among the humans and to try to inspire them to get off of their predetermined course. Meanwhile, Bridget races the clock to find her missing sister in hopes that she can still be brought home alive. “In the End” is a play that tries to make sense out of senseless death and provide some small comfort to those who grieve the fallen.” The show will be performed via a virtual staged reading streaming March 5-6.

The UCM Theatre and Dance New Play Festival will feature new works from UCM students and faculty over five days. Performances will take place March 24-28 in the Highlander Theatre. Tickets will cost $5 per show or $10 for a Play Pass.

“F***ed Up Fairytales,” written by Micheal Hagins and directed by Danny Gage, explores classic fairytales in a new light. “Jacob and Wilhelm Grimm come to the modern age to tell four of their stories, each with a modern twist. We see ‘Hansel and Gretel’ told as a manga tale, ‘The White Snake’ as a slapstick comedy, ‘Rumpelstiltskin’ told as a film noir, and ‘Little Red Riding Hood’ as a horror tale. Will these stories still hold up?” Performances take place April 2-3.

“Cambiar,” an original dance concert choreographed by Elizabeth Henks and Janie Turner, will explore “dance to bring awareness to issues in today’s society.” This performance will take place April 3.

“The Door,” written by Paul Elliot and directed by Carlos Gomez, explores a story that begins when a young man is murdered for being gay, and his spirit comes back to help his grandmother come to terms with his death. Performances are planned for April 9-10.

“An Iliad,” written by Lisa Peterson and Denis O’Hare and directed by John Keller, is a one-person show that puts a twist on a classic tale. Homer’s classic “Iliad” is performed in the first person by a singular performer and optional accompanist, and is a story about war - the siege of Troy and how war continues in the same manner throughout humankind’s history. This performance is set for April 10.

Shenanigans, will also perform as part of the Black Box season. Come join them for a night of improv comedy. Performances take place Feb. 5-6, April 2, and April 9.