“We Are UCM: 150 Years of Service” Celebrates Rich Tradition, Raises Funds, Food Donations to Help Others 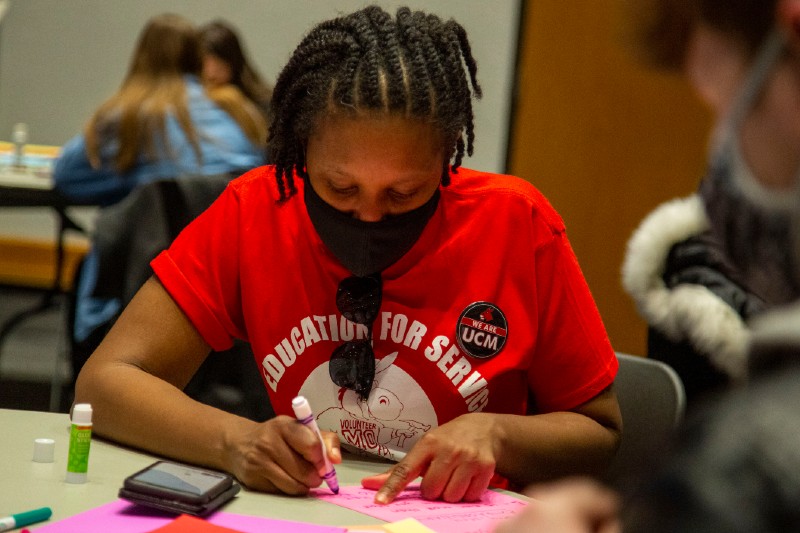 WARRENSBURG, MO – “We Are UCM: 150 Years of Service” not only recognized the University of Central Missouri’s long standing tradition of service to others, but it also led to $880 in monetary donations to help Warrensburg Big Brothers Big Sisters and generated 4,000 pounds of food for the Campus Cupboard and the Warrensburg Food Pantry.

The program celebrating the university’s sesquicentennial and the university’s commitment to service took place from Feb. 1-12, and concluded Friday afternoon, Feb. 12 at the Student Recreation and Wellness Center. Top team and individual entries in a variety of competitive categories were announced at that event. It also included announcements about fundraising efforts to help Big Brothers Big Sisters, an organization that serves local youth, and efforts to collect food for the Camus Cupboard, which serves UCM students and employees in need, and the Warrensburg Food Pantry which assists local residents.

UCM students who collected food participated in Donation Creation in which they used the non-perishable items to construct a scene that represented the theme, “We Are UCM: 150 Years of Service.” These creations were then judged according to their creativity in relation to the theme and their originality. The top entries were from Delta Zeta sorority and Alpha Tau Omega fraternity, which finished first. Sigma Kappa sorority and Lambda Chi Alpha fraternity were second, and Alpha Sigma Alpha sorority and Sigma Phi Epsilon fraternity, third.

The Royalty competition’s King, Chance Riddle, and Queen, Brittane Curry, also were introduced during the event. Finishing in second place for Queen was Kendra Dankenbring, and in third place, Hannah Staul. Alex Waisner was second in the King competition, and Carter Cramsey, third.

Also during the week, student organizations participated in a service day which included projects such as making Valentine’s Day cards for residents of the Missouri Veterans Home and a couple of other local adult care facilities. Students also volunteered their time to make wheelchair bags from recycled t-shirts and lap quilts from fleece to provide residents of these facilities.

Many other events are planned throughout the year to celebrate UCM’s 150th year. Learn more by visiting 150.ucmo.edu/events.