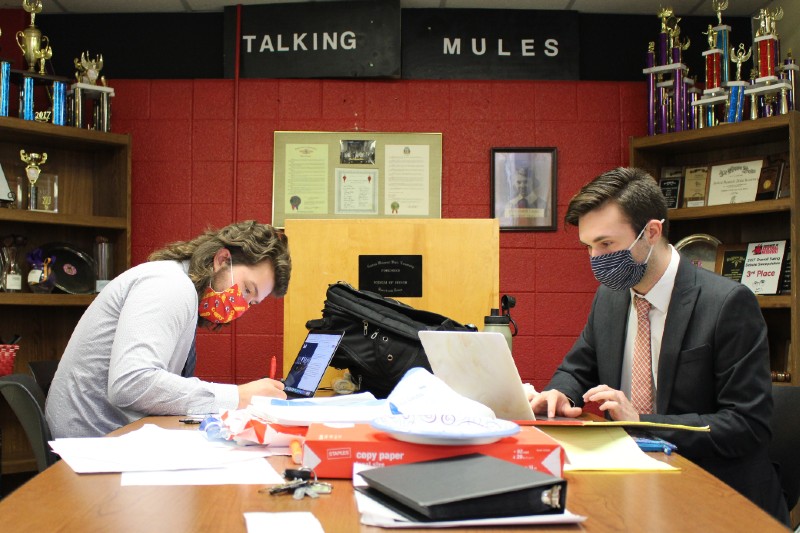 WARRENSBURG, MO – Bringing recognition to the University of Central Missouri through their excellent performance, the Talking Mules Speech and Debate Team won the Missouri Association of Forensics Activities State Championship Tournament during the weekend of Feb. 12-13. The team placed first in the Overall Sweepstakes Category to capture the State Championship title. Team members also claimed several individual state championships at the tournament.

“As a coach, I am always amazed with the level of hard work and commitment our students demonstrate preparing for competition. The Talking Mules excelled beyond even our greatest expectations,” said Jack Rogers, Talking Mules faculty advisor and professor of communication. “It just goes to show that despite the challenges faced due to the Covid-19 situation, our students find a way to excel and carry on our Mule traditions.”

Highlights included: Jaggard Williams' three first-place finishes garnered with individual State Championships in Dramatic Interpretation, Programmed Oral Interpretation, and Communication Analysis. He was also fourth in Impromptu Speaking. Williams’ combined performances made him the State Champion in Pentathlon - for the top overall Individual Events (IE) entrant in the tournament. He finished second for the Overall Forensicator award for his combined scores in IEs and Debate. He and his partner, R.J. Appleberry, were semifinalists in Debate. Along the way, he was second-place Speaker in Parliamentary Debate.

Other members of the Talking Mules who had high placement in the tournament included Courtney Callahan, who was second in Dramatic Interpretation; Manny Reyes and Trenton Hawes, who were the top seed in the tournament and named Co-State Champions along with teammates Gage Shrader and Lilly Rhodes in Parliamentary Debate. Joshua Boster placed third in Dramatic Interpretation, second in Informative, and third in Poetry. He also placed fourth in Dramatic Duo with teammate Ryann Hill.

Members of the Talking Mules are preparing for the National Finals Tournaments with two organizations, Pi Kappa Delta, the National Honorary Forensic Society, March 18-21, and the National Forensics Association in mid-April.