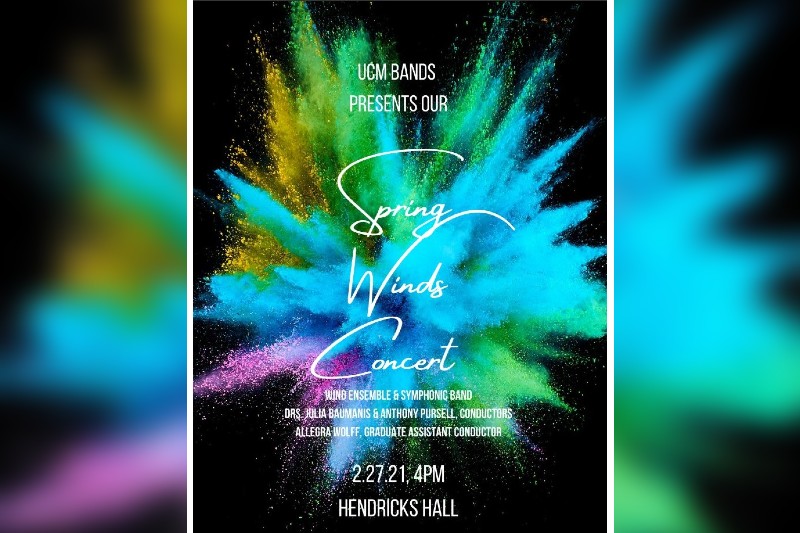 WARRENSBURG, MO  – The University of Central Missouri Bands invites the campus community and the general public to attend its first concert performance of the Spring 2021 semester at 4 p.m. Saturday, Feb. 27, in Hendricks Hall. This free concert was prepared over the course of the semester with careful COVID-19 mitigations in place for the safety of all of those who attend.

The “Spring Winds Concert” begins with the UCM Symphonic Band which will perform a range of newer works and old classics. The UCM Wind Ensemble will perform second on the program with an array of pieces that explore extended jazz techniques as well as the human emotional experience.

The concert was originally scheduled to feature the annual composer-in-residence component of the Claude T. Smith Invitational Band Festival but due to travel restrictions and other factors related to the ongoing pandemic, the concert’s mission was changed for this year, according to Anthony Pursell, director of bands and conductor of the Wind Ensemble.

“I wanted an opportunity to showcase our students and people in the Warrensburg community,” Pursell said.

Graduate student conductor Allegra Wolff will be featured during the concert on a staple piece of literature from the repertoire performed by the Wind Ensemble. A trio of student clarinetists will also be promoted in a wild, bluesy concerto written by 22-year-old music education student, Katahj Copley, from the University of West Georgia.

“He is a rising star in the Wind Band area and is providing very enjoyable music for the students and the audience alike,” Pursell said in talking about Copley. The trio will highlight the talents of music majors Shannon Jenkins and Allegra Wolff on soprano clarinet. Nicholas Pellin, a business management major, will be the featured bass clarinetist.

On Feb. 19, the Wind Ensemble was treated to a virtual meeting with Copley.

“I cannot thank you enough for giving clarinets a fun and challenging jazzy tune to play with the Wind Ensemble. This is so cool,” Shannon Jenkins (featured soprano clarinetist) stated when meeting Copley.

“I am completely inspired that he has the voice he already has, especially at his young age. Also, to know that his main focus is to become a teacher is equally inspiring. His students will be very lucky to have him and his vibrant energy,” Pursell added.

“To know at that time the 20 children who lost their lives that day were all the same age as my two children made me hug them a bit tighter that evening as the world watched the news unfold from the Connecticut elementary school,” Pursell said. “The composer, Steven Danyew, was a student at Sandy Hook Elementary and still lives one mile away from the school. Anna Coombs will be the featured narrator reciting Christina Rossetti’s poem, ‘Remember.’”

“I wanted to remind our audience who these victims were, what they looked like, and why it is important for us to honor their memory and serve as their advocates into the future,” Pursell said in talking about the selection of Coombs to recite the narration. Anna is a student of Amy Weldon, a UCM alumna, and an active member of the Warrensburg Community Band and UCM Alumni Band.

“Anna has been a joy to work with and I believe it is important for her generation to also understand how these events impacted their community and families alike. The fact that she is near the age of these 20 students is a sobering reality of how devastating all of these school shooting incidents really are,” Pursell said.

All audience members are required to wear face coverings and to socially distance themselves from each other.