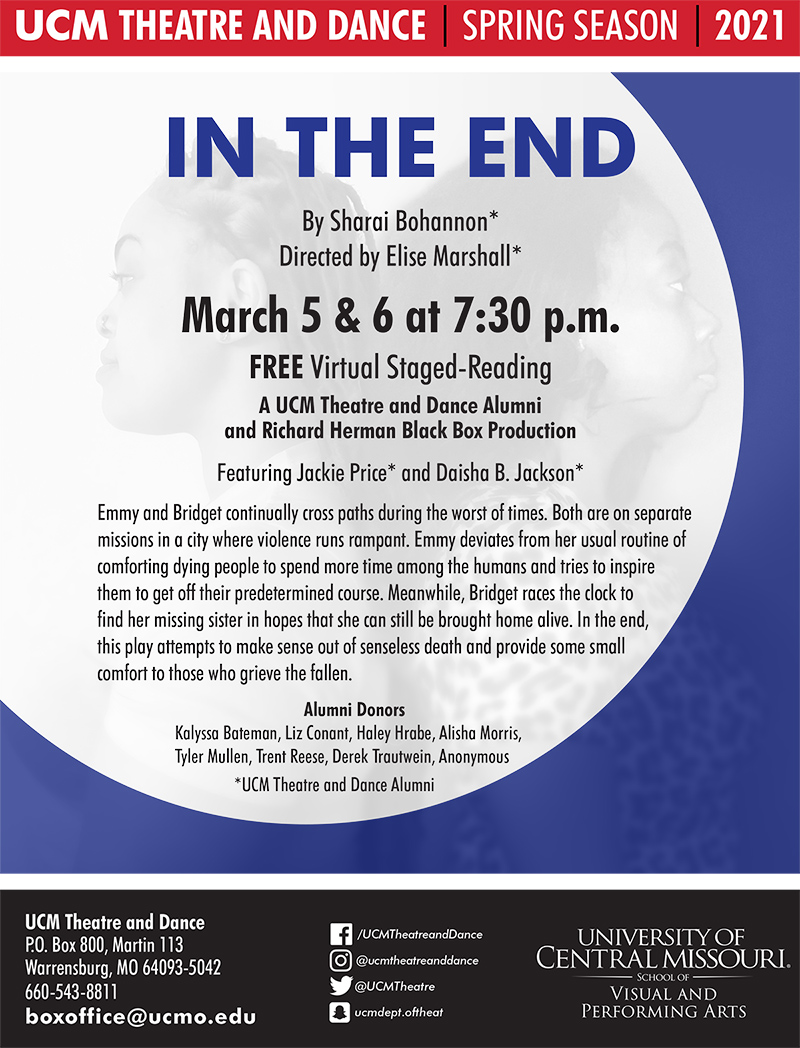 WARRENSBURG, Mo. - University of Central Missouri Theatre and Dance, in conjunction with the Richard Herman Black Box Theatre Program and UCM Theatre and Dance Alumni, will present the inaugural alumni production: a virtual staged reading of “In the End” by alumna Sharai Bohannon, Class of 2013. The show will be presented at 7:30 p.m. March 5 and 6, live via Zoom. Virtual doors open at 7:15 p.m.

Dr. Julie Mollenkamp, artistic director, talked about the excitement surrounding this event, noting, “What a thrill to bring such talented alumni and current student artists together to produce art. Sharai’s play is exquisite and wondrous - telling such a human story of working through loss and looking at a way to path forward. The team is extraordinary and it is an honor to be part of this new tradition.”

“In the End” tries to make sense out of senseless death and provide some small comfort to those who grieve the fallen. Characters in the production Emmy and Bridget continually cross paths during the worst of times. Both are on separate missions in a city where violence runs rampant. Emmy deviates from her usual routine of comforting dying people to spend more time among the humans and to try to inspire them to get off of their predetermined course. Meanwhile, Bridget races the clock to find her missing sister in hopes that she can still be brought home alive.

The playwrite, Sharai Bohannon, received her Master of Fine Arts in Playwriting from Texas Tech in 2016. With regard to returning to having her play virtually produced at her alma mater, she said, “Being in the virtual rehearsal space with other alumni, and current students, of my alma mater for a play that I wrote (even though I went there for a BFA (Bachelor of Fine Arts) in technical theatre but I actually practiced my calling in the Blackbox with my first baby scripts like ‘The Waiting Room’) as part of my mentor’s last semester before retirement like closure that we don’t often get.”

The production is directed by alumna Elise Marshall, Class of 2020, who will also act in the show. When asked about coming back to her alma mater to work on the production, Marshall stated, “Coming back to direct ‘In The End’ as an alumna is an honor that I didn’t expect to experience so soon after graduating. Working on this show with current and past students has been a great way to jump into the virtual theatre world and bring this amazing play to an audience.”

“In the End” is for audiences ages 13 and up. Those planning to see the production should be aware that the content includes themes of violence, loss and grief.