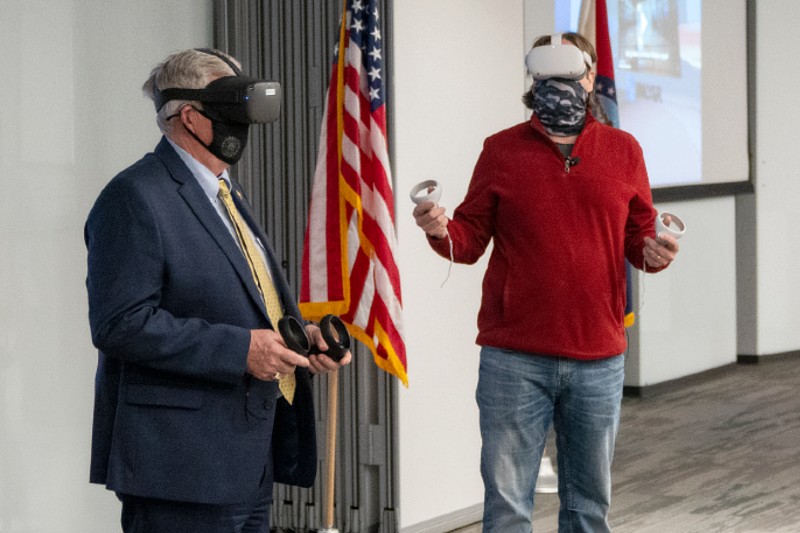 Missouri Governor Mike Parson, left, was guided through a demonstration of equipment used at the University of Central Missouri’s new Mixed Reality Studio housed in the Gigabit Lab at the Missouri Innovation Campus in Lee’s Summit. Working with the governor during a visit to the MIC was Jeff Danley, director of innovation for VMLY&R, Kansas City.

WARRENSBURG, MO – Reflecting on workforce development goals he set early in his tenure as Missouri Governor, Mike Parson on March 2 said a new initiative at the Missouri Innovation Campus (MIC) to prepare students for the workforce of the future “is exactly what we need to do” as a state.

The governor made his remarks during a visit to the MIC in Lee’s Summit to see firsthand how projects funded through the Missouri Excels (MoExcels) program are helping to prepare the next generation of researchers, developers, and entrepreneurs. The University of Central Missouri, Lee’s Summit R-7 School District and area businesses came together for his visit to showcase the new Mixed Reality Studio as a key educational project that will help address the state’s critical need for a well-trained, technology-focused workforce.

The Mixed Reality Studio was launched by UCM in the fall of 2020, and is part of the Gigabit Lab housed within the MIC. MoExcels, which was implemented by the Missouri Department of Higher Education and Workforce Development, provided almost $675,000 toward the Information Technology Expansion Project that included the Studio and related UCM initiatives. All are designed to help facilitate development and expansion of employer-driven education and training programs to increase educational attainment.

“Two and half years ago, we had a vision in the Governor’s Office: what are the two things I can do to really make a difference for the future of this state,” Parson said. “It was workforce development and infrastructure. I knew if I could get those two things as priorities in the state and stay focused on that, it could really make a difference.”

He said meeting such goals has hinged on public schools, universities, communities and the public sector working together. Such efforts, he said, have helped Missouri become second in the nation in apprenticeship programs, and have made possible “fast-track” programs that help students to accelerate their degrees.

“When I speak a lot, I speak about Lee’s Summit and Perryville, Missouri. They are two communities that are really on the right track, setting the stage, setting a goal for other communities,” he said. “When you put the high schools in place, put the university in place, look what you have here today. I guarantee you, how many other communities would love to have this facility in their town, in their area where kids can come here and get an education?”

“I couldn’t be in a better place than to be here today,” Parson said, reflecting on visit with individuals involved with the MIC and the Mixed Reality Studio.

“Since its inception, this outstanding facility has served as a model for what can be accomplished when a public school district and a university work jointly to create educational opportunities that are focused on the needs of students and the many businesses and industries that contribute to our state economy,” Best said.

“As the name of this facility implies, innovation is at the core of what we do at the MIC. We’re grateful for Governor Mike Parson and members of our legislature‘s support of our efforts in creating a highly skilled workforce by making possible initiatives such as MoExcels,” he added.

During the MIC event, the governor put on virtual reality goggles, and Danley, as a representative of a group that has worked with UCM-Lee’s Summit on developing the Mixed Reality Studio, led the state leader through a demonstration about how the Studio can be applied to education and to the workforce.

“I think a lot of people associate virtual reality with video games,” Danley said. “Those video games are so realistic, and we’re applying that same gaming technology to education.”

He cited advantages to using virtual reality such as the ability to take students on a field trip without actually leaving the classroom. “I know when I was in school and we were thinking about Roman history, there’s a lot of reading, and you might have a teacher roll down a video cart so you could watch a video in the room, but in virtual reality, you can actually teleport into the Roman Colosseum and walk around and explore that space. That is greatly going to benefit education.”

But how does the same technology benefit business and industry?

“It’s really exciting to see how the entrepreneurs are applying this type of technology to fields like architecture and engineering where they can actually create a virtual model of a building or a structure that they are working on,” Danley said. ”We’ve even seen fast food restaurants that have created virtual environments where they can train their employees without having wasteful by-products of cooking food that never gets eaten.”

The Mixed Reality Studio supports research, application development, education and workforce initiatives to help students, entrepreneurs and companies drive innovation in their industry through the power of virtual reality (VR) and augmented reality (AR).  Using these technological tools, it has established a learning lab that is focused on creating programs that that will help build a pipeline of VR/AR talent, instrumental in building the curriculum of professional education programs that include hands-on learning opportunities for students, allows faculty to perform research and create curriculum experiences at the MIC and at the UCM campus in Warrensburg, enables UCM to offer membership that includes consultation services to companies, including access to startups, projects and corporate innovation programs, and provides a state-of the-art location to prototype new solutions and launch new ventures.

In addition to preparing students, through its work with Velocity Lee’s Summit, UCM will utilize the Mixed Reality Studio to help entrepreneurs take their business idea/concept/startup to the next level, providing advice, support, mentoring, networking and preparation for funding.