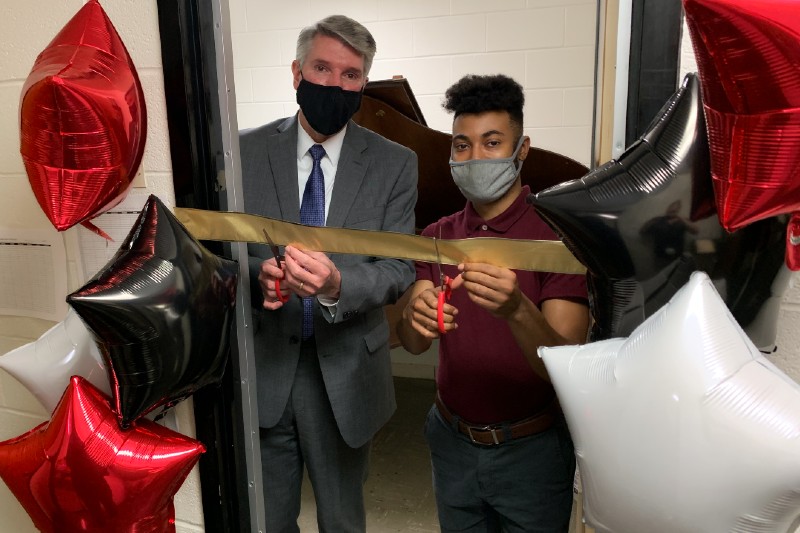 University of Central Missouri President Roger Best (left) and UCM student Andre Williams cut the ribbon at the dedication ceremony in honor of Dr. Dorothy Elizabeth Steward. Williams performed the traditional hymn “His Eye Is on the Sparrow,” famously recorded by Mahalia Jackson, at the ceremony.

WARRENSBURG, MO – Honoring Dr. Dorothy Elizabeth Steward’s great appreciation for education and her passion for music, the University of Central Missouri on March 10 celebrated her life through the dedication of a music practice room that will have a longtime impact on UCM students developing their performance skills.

Located in the Utt Music Building, this medium-sized room is one of the practice rooms that are utilized every day by music students. It has been renovated with funding from two anonymous donors as well as the UCM Alumni Foundation to include a new soundproof door, freshened paint, and new acoustic panel sound absorbers. These updates will reduce and control reverberation time at medium and high frequency, helping to eliminate echo and soften the resonance mode effects in the room. This is part of a larger practice room renovation project that is benefitting from individuals or organizations willing to sponsor a room, according to Eric Honour, co-chair of the School of Visual and Performing Arts in the College of Arts, Humanities, and Social Sciences.

“This project benefits the daily experience for music students at UCM by improving the sound inside each of our practice rooms in the Utt Building as well as improving the acoustic isolation between the rooms,” Honour said. “Music students spend hours every day working in practice rooms and with an improved door and acoustic treatment, they are able to focus their energies on their own practice without being distracted by the sounds of other students practicing next door.”

This specific practice room includes a brass plaque honoring Dr. Steward and a framed photo of an inspiring musical artist of her family’s choosing, Mahalia Jackson.

“Faculty worked closely with student suggestions for artists to feature and arrived at a diverse list of performers, composers, and other musicians from all walks of musical life, from classical to pop, hip hop to country, gospel to folk, and everything in between. Improvements to the practice rooms have been one of the most common student requests for decades and we are delighted to be making some headway on the project.”

The dedication took place on the same day Dr. Steward, a longtime resident of Clinton, Missouri, would have celebrated her 93rd birthday. Born March 10, 1928, she passed away on June 20, 2020, leaving behind a long legacy as a highly devoted mother of eight children, remembered for faithfully serving her community through decades of involvement with church and related religious activities, and participation on civic boards.

"Dr. Dorothy Elizabeth Steward was passionate about music, so it is a tremendous honor that her name will now be associated with a room that has been updated to accommodate a new generation of aspiring musicians,” said Courtney Goddard,  vice president, University Advancement, and executive director of the UCM Alumni Foundation. “Being able to celebrate her memory through this recognition ceremony on her birthday makes this a very special opportunity for our music students, faculty and for the entire UCM family.”

During the dedication ceremony, UCM President Best spoke, and a student, Andre Williams, performed live with accompaniment by another student, Cindy Goff, the traditional hymn “His Eye Is on the Sparrow,” which was famously recorded by Mahalia Jackson. Members of Dr. Steward’s family attended virtually. Among those family members was her son, David Steward, who graduated from UCM in 1973 with a bachelor’s degree in business administration. He went on to have a successful career as the founder of World Wide Technology in St. Louis, while also authoring the books “Doing Business by the Good Book” and “Leadership by the Good Book.” He and his wife, Thelma, established the Steward Family Foundation and have been strong supporters of UCM and its students through philanthropic efforts that include the unique Steward Scholars signature program in the Harmon College of Business and Professional Studies.

As a youth growing up in Clinton, Dr. Dorothy Steward was active in St. James Church, and attended Lincoln School. At a time of segregation, the family moved to Chicago, Illinois, where she graduated from high school a year early, and pursued college studies. She married Harold Steward in 1946, and the couple later moved their family back to Clinton.

Throughout her life, she enjoyed teaching Black history to others, and she built longstanding relationships within the Clinton community. Her dedication to her faith and community included service as Grand Matron of the Order of Eastern Star, founding member of the Samaritan Center Development Board, and membership on the Henry County Library Board of Directors, a facility where much earlier in her life she had been denied entry due to segregation. She also became an adult leader for the first integrated Boy Scout Troop in Clinton.

Her great love for music is not only evident through dedication of a room at UCM in her name, but through other accolades. Among them is the naming of the Harold and Dorothy Steward Center for Jazz in St. Louis, Missouri, a facility dedicated to the preservation of the art of jazz for future generations.

Her strong faith was evident in how she lived her life, and in the values she sought to instill in her children and to those whose lives she touched. As her family noted, this is best articulated through the Bible verse Joshua 1:9: “Be Strong and of a good courage; be not afraid, neither be thou dismayed; for the Lord God is with thee whithersoever thou goest.”

Individuals who want to learn more about the music practice room project can do so by contacting Pat Smithson, director of development in the UCM Alumni Foundation, at psmithson@ucmo.edu or by calling 660-543-4263.