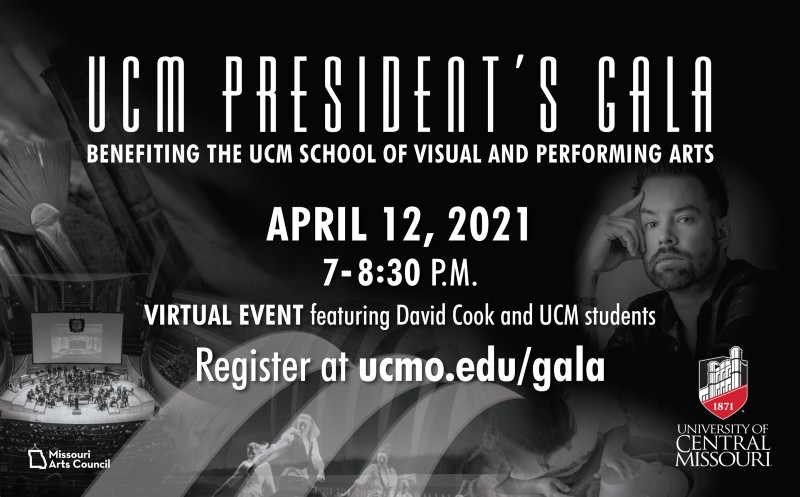 WARRENSBURG, MO – An opportunity to celebrate collaboration between University of Central Missouri faculty members, students and alumni while benefiting the School of Visual and Performing Arts is planned for 7 to 8:30 p.m. Monday, April 12 as UCM President Roger J. Best, Ph.D., revives the President’s Gala. The 2021 event was recorded at the Kauffman Center for the Performing Arts in Kansas City, and will be available for a one-time viewing only, free via streaming video to those who register in advance.

With the theme, “The Arts Are the Future,” the event showcases students’ work in each of three areas in the School of Visual and Performing Arts: Art and Design, Music, and Theatre and Dance.  These areas will be showcased both separately and in union during the event, which also features a couple of special guests well known to both UCM and to residents of the Kansas City metropolitan area.

Bryan Busy, chief meteorologist for KMBC-TV 9 News, will serve as the master of ceremonies. A former Blue Springs resident who is one of UCM’s most recognized alumni, David Cook, also will join in the evening of entertainment. The 2006 graduate’s career skyrocketed when he won the nationally televised “American Idol” competition in 2008, and has since gone on to pursue a professional career that includes a platinum album and performances on Broadway stages.

President Best has revived  the gala as an opportunity to not only showcase the work of university students and faculty, but also to raise funds to extend the educational benefits of the School of Visual and Performing Arts, which is part of the College of Arts, Humanities, and Social Sciences. Individuals can register by going to ucmfoundation.org/2021presidentsgalavirtual. After doing so, they will receive by email a link to view the performance. Anyone who wishes to offer their financial support of the visual and performing arts at UCM will be able to make a donation at the time they register.