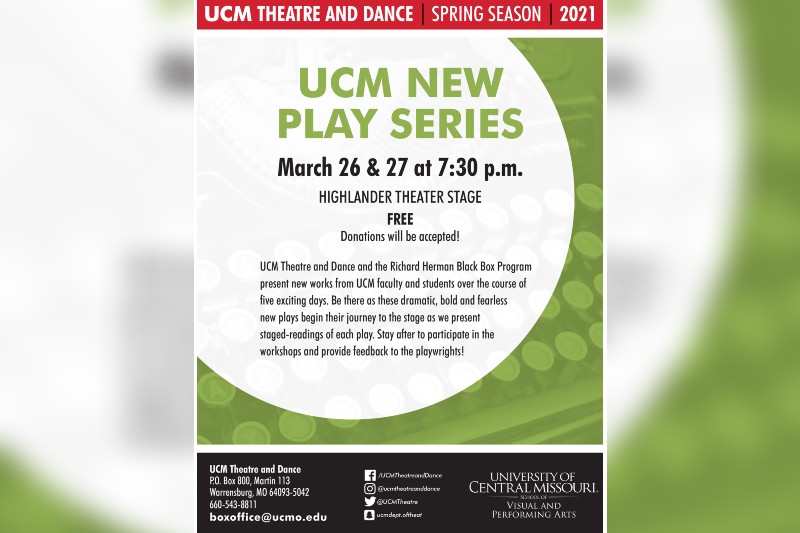 WARRENSBURG, MO – A weekend of live entertainment is planned as University of Central Missouri Theatre and Dance presents its first presentation of the New Play Series at 7:30 p.m. Friday, March 26 and Saturday, March 27 at James L. Highlander Theatre. While the series is performed on stage, and admission is free, presentations also will be available via livestream for those who would like to experience the series remotely. This weekend, the series will feature 11 new works written by current UCM students.

Saturday night will feature a presentation of “The Lil’ Shakespeare Collection” written by Luke Habjan and Anthony Kiger, and directed by Carlos Gomez. Other plays to be presented include” Romeo and Juliet: A Kickball Love Story,” “Titus Andronicus’ Arts and Crafts,” “Naptime for Othello,” “JC: The Line Leader,” and “A Jungle Gym’s Night Dream.”

Production Advisor Aaron Scully stated about the New Play Series, “Playwrights write plays to see them performed and a lot of new plays end up living as just literature. It’s really exciting that our UCM Theatre and Dance playwrights will get to see their work performed for an audience. Additionally, it’s great that our audiences will get to hear the creative voices of our students.”

Admission to the New Play Series is free. Livestream links will be provided on the UCM homepage in the Facebook events for audience members who would like to watch remotely.

To promote a safe environment, social distancing and face coverings/masks will be required in the Highlander Theatre.

To keep up with all the latest UCM Theatre and Dance news, events and production information, please like University of Central Missouri Theatre and Dance on Facebook. Anyone who has questions about the production season is encouraged to contact Aaron Scully at ascully@ucmo.edu.