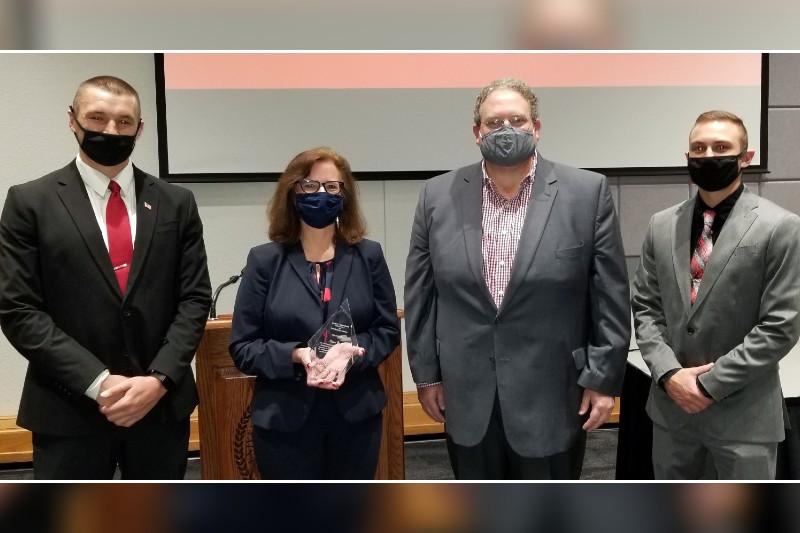 WARRENSBURG, MO – Joining a group of individuals who have distinguished themselves through service, Shari Bax, Ph.D., vice president for Student Experience and Engagement at the University of Central Missouri, has received the 2021 James C. Kirkpatrick Excellence in Governance Award. In a ceremony March 23 on campus, she became the 36th person to be presented the award, made possible by the Student Government Association.

SGA created the Excellence in Governance Award in 1985 to honor the public service of UCM alumnus James C. Kirkpatrick, who served as Missouri’s Secretary of State for 20 years and was a longtime member of the university’s governing board. The award has been presented annually since 1986, recognizing an individual who promotes the public interest, practices good governmental procedures, and has shown loyalty to the university. Phil Bridgmon, UCM’s provost and vice president for Academic Affairs, made the award presentation.

“I want to commend the SGA for recognizing Dr. Bax. I’ve been very impressed with your work over the last couple of years, your leadership, your agenda, the things you are moving forward,” he said, directing his attention toward to Bax. “And, this award this evening confirms your good judgement even more so, which we all see on a daily basis, so I thank you.”

He pointed out the printed program lists individuals who are past recipients of the Kirkpatrick Award. Among those honored are four former Missouri governors, a former FBI director, former attorney general, a military general and many others who have held positions in which they have served the public or students.  Bax became the fifth recipient of the award who has a direct tie to UCM through their employment.

“I think your first impression of Dr. Bax is always a memorable one,” Cobb said. “My freshman year I was fortunate enough to converse with her before and after SGA events. I always remembered being impressed, not just by her intellect and insight, but also by how much she genuinely cares about what I thought and my ideas.”

He added that Bax shoulders a significant workload in her role at the university, but she maintains the common touch and sense of humor which are also characteristics considered in the award selection process. Cobb stressed her “kindness and understanding serves her well in a position where she often gets to experience the worst situations.”

Bax plays a strong leadership role at UCM in times of crisis. She helps coordinate exercises on campus to help prepare university members to serve in a crisis situation. Putting those exercises into practice, throughout the 2020-2021 academic year, she has led the Emergency Operations Center at UCM, overseeing a team that has helped guide the university through the pandemic.

After joining UCM in 1997, Bax spent many years in the classroom teaching students, and currently holds the rank of professor of political science, in addition to her administrative title. She also serves as co-advisor for the Breakers, which is a campus group that annually plans an alternative spring break for volunteers willing to assist with projects sponsored by Habitat for Humanity International. This has given Bax an opportunity to work with students and travel all over the United States with them to help build more than 30 homes for families.

“Watching and working side-by-side with students during the week each year, and as they prepare for that week, has given me insights into the backgrounds, challenges, and motivations of our student population,” Bax said. “It has deepened my understanding of group dynamics, problem solving, applied learning, leadership styles, and the list just goes on and on. It has made me a much better adviser, a better volunteer, a better teacher, a better parent, and a better community citizen.”

During her tenure, Bax was instrumental in establishing a first year experience program for students and she has been a chapter advisor for a sorority, and advisor for several student organizations. She also often leads programs for student groups in residence halls.

Her service outside the university has included membership on the Compass Health Network Board of Directors, and serving as vice chair for the Warrensburg Planning and Zoning Commission. She previously served on the Early Childhood Opportunity Center advisory committee, and in 2001, she served as a member of the Missouri House Apportionment Commission.

In her acceptance remarks, Bax briefly reflected on how her professional plans changed from UCM being a temporary stop to a more permanent one after her arrival on campus 24 years ago. While she came here expecting to gain some experience and move on, she fell in love with the university.

“The faculty and staff impressed me with their utter devotion to the students. The students inspired me. This institution’s commitment to, and embodiment of its motto, ‘Education for Service,’ made this place a perfect fit for me,” she said. “I could live, teach, and eventually even lead, based on two values I hold dearly; service and education. I believe service and education are key to building our communities, addressing social injustice, and improving ourselves.”

"Truly, I am who I am because I have served. And that service has been my privilege and my honor. President Woodrow Wilson once said, ‘You are not here merely to make a living, you are here in order to enable the world to live more amply with greater vision, with a finer spirit of hope and achievement. You are here to enrich the world, and you impoverish yourself if you forget the errand.’ I trust you will not forget it. And your lives and our world will be all the better for it,” Bax told the Kirkpatrick Award audience comprised of UCM students and employees.