UCM’s 150 Years of Education for Service Honored by Legislators 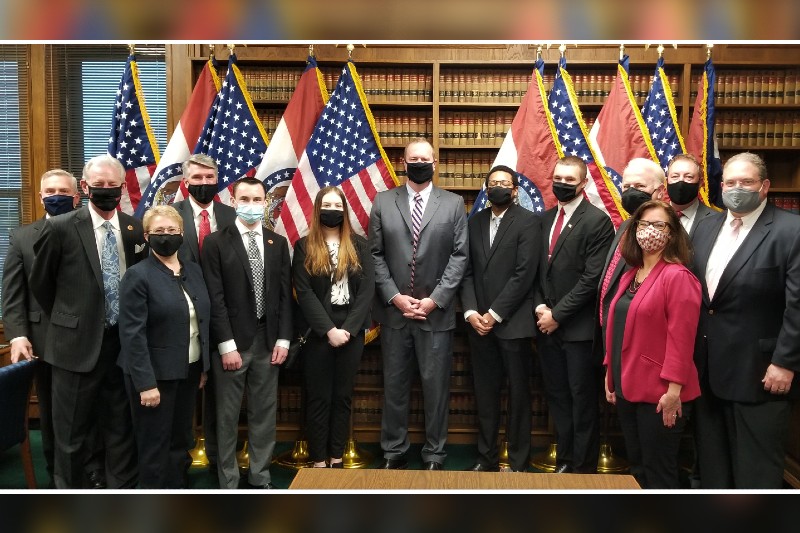 WARRENSBURG, MO – Adding a new highlight to the University of Central Missouri’s sesquicentennial celebration, Missouri legislators met with university members and honored UCM’s 150th year with House and Senate resolutions on April 7. A 12-member group that included UCM President Roger Best, members of the Board of Governors, administrative members, and students, represented the university for this special day in Jefferson City.

After kicking off the day with a brief visit to the Supreme County Building, where they were greeted by Attorney General Eric Schmitt, the group crossed the street and spent most of the morning at the state capitol. They were invited to the House of Representatives’ opening session, which included the presentation of a resolution signed by Representatives Dan Houx, District 54, and Kurtis Gregory, District 51. Moving on to the Senate Chamber, the group was acknowledged and UCm honored with resolution signed by Senator Denny Hoskins, District 21.

The resolutions presented to UCM noted the legislative action that took place in April 1871 that made it possible to open the institution as the Second Normal School for the Second District, and the evolution of UCM from a small school that began with only 30 students to a thriving institution that today serves approximately 10,000 students representing nearly every state and 50 different countries. They also recognized UCM’s more than 100,000 alumni, whom the Senate resolution notes, “use their education by looking beyond the surface, merging creativity, and developing innovative solutions for societal challenges.”

The capitol visit and tour also took the UCM group to the offices of Lieutenant Governor Mike Kehoe and Treasurer Scott Fitzpatrick. Both took time to learn more about UCM’s sesquicentennial and offer their congratulations to President Best and others.

As UCM’s 16th president, Best said it is not only an honor to serve the university, particularly during a milestone year such as the sesquicentennial.

“It’s very rewarding to be here in the capitol building and be honored by the House and Senate and to meet with other elected officials in the state to hear their congratulations, but also to hear the accolades and sentiment about what a great university the University of Central Missouri is,” Best said. “That’s a testament to so many individuals working hard each and every day to serve the state of Missouri and the region through quality education and fulfilling our mission even beyond education, serving the citizens of the state in so many ways.”

Two UCM student leaders joined the group, Justin Cobb, a junior political science and international studies major who serves as president of the Student Government Association, and Zac Racy, a political science and international studies major who will graduate this spring after also serving as a student member of the UCM Board of Governors. Both of them expressed their appreciation for being part of this special day in the long life of their alma mater. 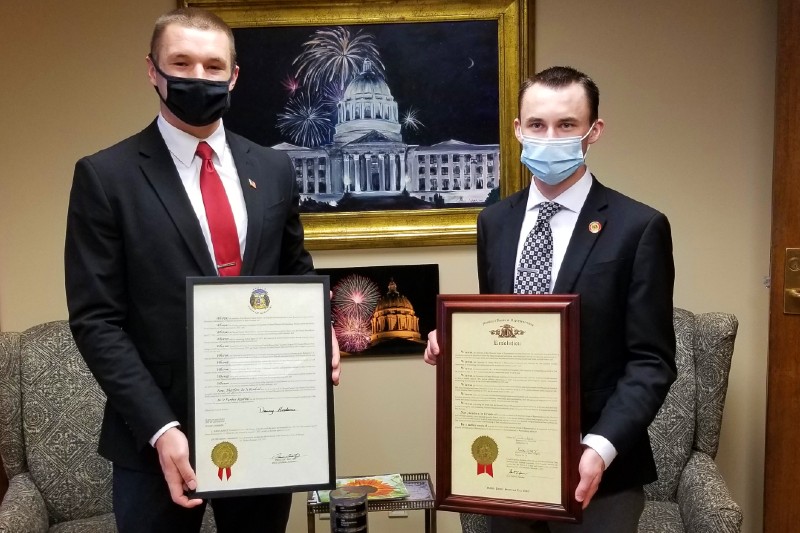 University of Central Missouri students Justin Cobb, left, president of the Student Government Association, and Zac Racy, student member of the Board of Governors, display Missouri House and Senate resolutions commemorating UCM’s sesquicentennial during a visit to the state capitol on April 7.

“It’s good to be part of UCM’s history,” Cobb said. “As we walked through the capitol, we met so many alumni already. I kind of learned about everything that has happened before from those experiencing the same level of ‘Education for Service,’ that we get to go through now to prepare us for the future.”

Racy added, “It’s just an honor to be at the Missouri state capitol with several other students representing our student body. As we go through here we really see the presence that UCM has statewide. In fact, we are one of the oldest universities in the state. I think people really appreciate seeing us here, but also appreciate the longevity and impact that this university has had on our state.”

Two other university students who were part of the group have already whetted their appetite for public service by participating as legislative interns in Jefferson City. Both provided their perspective on what this day meant to them, and how their UCM education is going to benefit them in the future.

“I think it’s really cool to see them (UCM) being honored. My uncle and my grandparents both went to UCM, so I’m third in line in that generation of going to UCM,” said Hailey LeMaster, a junior who is majoring in public relations and political science. She added that the university has provided her with “tremendous opportunities.” “I wouldn’t have been able to intern for Senator (Brian) Williams (14th District) without them. So it’s really cool to see UCM getting honored. They absolutely deserve it.”

LeMaster said she hopes to work in the field of political consulting and campaign management. Her internship has been a valuable opportunity to learn about how the legislative process works, and to make connections that will help her prepare for a career focused on assisting with candidate elections at the local, state and national level.

“UCM has done a lot for me in the past, so seeing that recognition here means a lot to me personally,” said Michael Lewis, who is a junior public relations and political science major who interns with David Pearce, a longtime Missouri legislator who was instrumental in setting up the events that took place in Jefferson City. Pearce serves as UCM’s Executive Director for Governmental Relations, which is a career path that also interests Lewis.

Many additional events are planned for the university’s sesquicentennial celebration throughout 2021. Lean more by visiting 150.ucmo.edu.