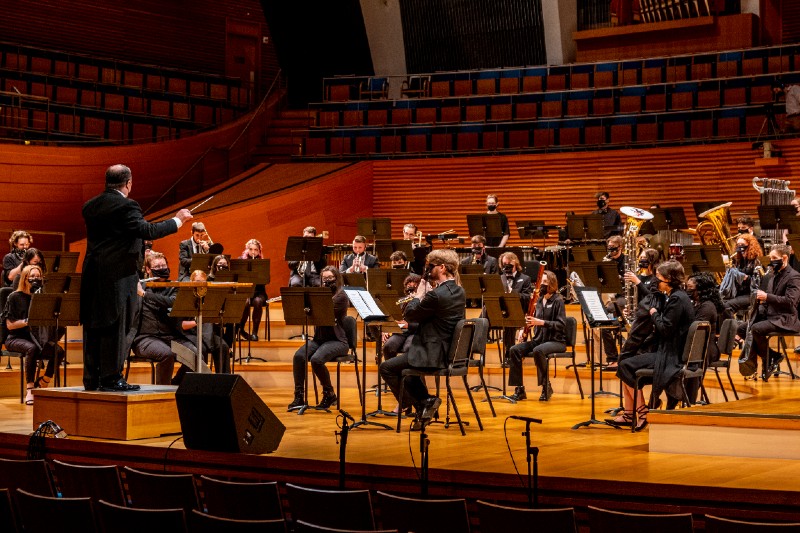 A tribute to the University of Central Missouri’s long tradition of educating students, the UCM Wind Ensemble will present its final concert of the 2020-2021 academic year at 7 p.m. Thursday, April 22, in Hendricks Hall. Narrated by students, the concert will feature video introductions of six selections, each corresponding to a milestone in the institution’s history. The program is free and open to the public.

UCM was established in 1871 as the State Normal School,Second  District. At the same time the university is celebrating its 150th year, the concert opens with Giuseppi Verdi’s Grand March from ‘Aida,’ which is often used as a processional for commencement exercises. This concert opener reflects the university’s mission as it sought to transform students into lifelong learners who use their completed education to serve their communities.

Following the concert opener, the ensemble will present a march by John Philip Sousa that is off the beaten path. Composed in 1919 when Normal No. 2 became Central Missouri State Teachers’ College, The Golden Star was composed in memory of Theodore Roosevelt, who died Jan. 6, 1919, and his son Quentin, who was killed in aerial combat over France on July 14, 1918 (Bastille Day). The march takes on a somber feel and includes Taps, used to honor the fallen soldiers killed during World War I. In many ways, the global events of 1919 mirror many of the struggles we face today in 2021 with the continuation of a global pandemic (Spanish Influenza, February 1918 to April 1920) and global/political conflict.

With the conclusion of World War II, the institution saw another change in its identity by rebranding as Central Missouri State College. In that same year (1946) Morton Gould, a prominent composer of orchestral music, wrote his first work Ballad for Band for the emerging ensemble known as the concert band. With the addition of saxophones and the euphonium (baritone horn) to the orchestral wind section, and expanding the use of percussion instruments, Gould explored colors that were uncommon at that time. It is likely this milestone work for concert band that prompted other prominent composers of the day to seriously consider writing for this emerging ensemble, thus elevating the status of the concert band as a viable medium of musical expression and performance.

In 1972, Central Missouri State College became Central Missouri State University. In that same year Claude T. Smith, a prominent composer, native Missourian, and longtime friend of the university’s Director of Bands Emeritus, Russ Coleman, composed Prelude for Band. Smith was known for visiting the institution frequently and collaborating with Dr. Coleman on many projects. The relationship grew stronger when his Claude’s daughter, Pam Smith Kelly, attended the institution as a bassoonist. Her relationship with Dr. Coleman and the institution continues to this day.

In 2006, a new chapter in the life of the university took place when its Board of Governors approved a name change to the University of Central Missouri. In that same year composer John Mackey transcribed Strange Humors for band. Originally a student composition written for string quartet and djembe at The Julliard School and later adapted by the Parsons Dance Company with Robert Battle, the composition expands the colors of the concert band far beyond those originally conceived by Morton Gould’s Ballad for Band in 1946. Using jagged rhythms and expanded techniques, the composition has become one of Mackey’s staples from his catalog and a favorite of the UCM Wind Ensemble.

The concert will conclude with a sense of optimism and hope with Richard ‘Joey’ Carter’s Between Red & Black, which received its world premiere during the 2021 (virtual) President’s Gala at the Kauffman Center. Conducted by Assistant Director of Bands and Director of Athletic Bands, Dr. Julia Baumanis, Between Red & Black ties in the UCM Alma Mater and themes of Carter’s fraternity Phi Mu Alpha (an honorary music fraternity). He will graduate from UCM this spring with a degree in instrumental music education.

Because of continued mitigation efforts due to COVID-19, audience members are required to wear facial coverings and are asked to sit in areas promoting social distancing. For questions, please contact Dr. Anthony Pursell at 660-543-4680 or apursell@ucmo.edu.