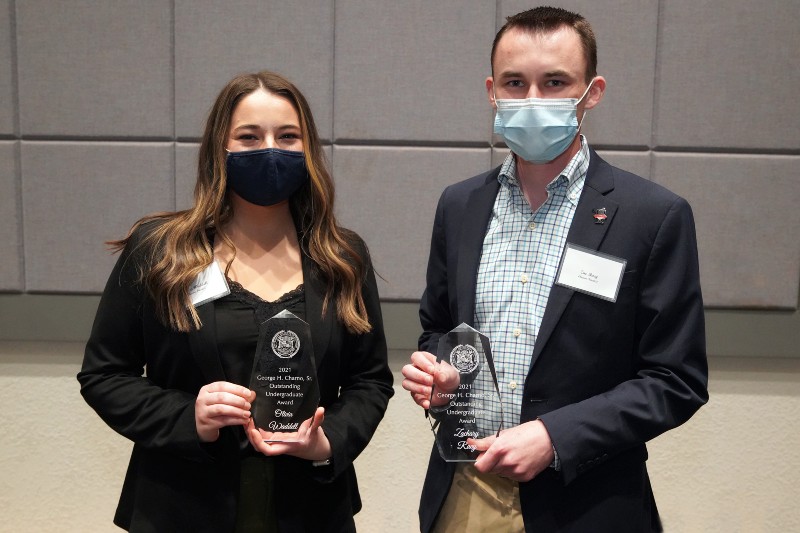 WARRENSBURG, MO – Zachary Racy, Riverside, Missouri, and Olivia Waddell, Olathe, Kansas, have been named recipients of Charno Awards, the highest honor presented to University of Central Missouri graduating seniors, and will be honored during spring commencement exercises May 7-9.

The Charno Award is presented annually to the top male and female citizens at UCM. The honor is named after George Charno, Sr., a Kansas City attorney who established the award in 1940 to recognize the two outstanding members of the senior class. Selection is based on a combination of criteria, which include: leadership, scholarship, character, involvement in campus organizations and extracurricular activities, service to the university, and involvement in one’s academic department. Announced during the spring 2021 semester, this year’s recipients are Zachary Racy and Olivia Waddell.

Racy, called “Zac” by his friends at the university is graduating summa cum laude with a Bachelor of Science in Business Administration, where he gained experience in many areas that have a direct impact on students. He was the student representative on the university’s Board of Governors, a position he assumed after his work with the Student Government Association. Since 2019, he has donated his time to opportunities that include serving as a senator, floor leader and member of SGA’s University Issues Committee. He has volunteered as public relations chair for the Honors College Student Association, and served as vice president of finance and records for the Intrafraternity Council. Racy also was president of the Service Team in the Integrated Business Experience Program, which offers real-life experience to students in developing and marketing products.

While assisting outside groups such as Big Brothers Big Sisters, Racy’s campus involvement includes serving as a member the Mule Nation Student Chapter, alumni ambassador, and member of Sigma Tau Gamma fraternity. He has been active in Student Experience and Engagement activities such as serving as an Impact Student Leadership Retreat keynote speaker and Mule Team leader, and participating as a student speaker for the Week of Welcome Kickoff events. He worked as a student employee in the Office of the President and at the Pertle Springs golf course.

Waddell has served as student ambassador and freshman orientation leader for UCM’s Admissions Office and engaged in community service during annual homecoming celebrations and Greek Week, while also joining with her sorority sisters to assist organizations and programs such as Ronald McDonald House, Art Bra KC, and the Cinderella Dress Exchange. She worked on a service trip with survivors of sex trafficking in the Philippines, was a volunteer for Integrity Homecare and Hospice doing bereavement and wellness visits, and assisted with Warrensburg Project Community Connect, which aids local families in need. In addition to serving as a community advisor and an office assistant for University Housing, she was the recipient of grants  that enabled her to do research related to the Middle East, and in 2018 she participated in a Study Abroad Trip to Jordan and Israel.

Both students were recognized in an awards ceremony that took place on campus April 21. They were also recognized April 22 by the Board of Governors.