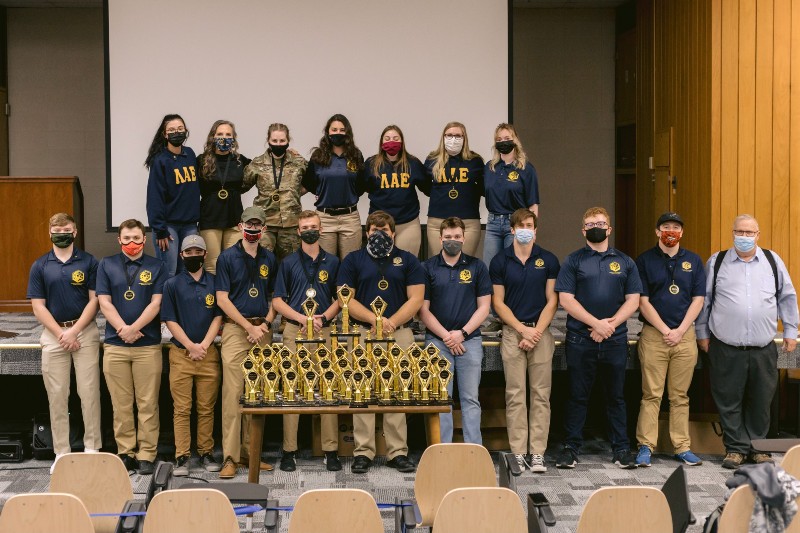 Several members of the University of Central Missouri Lambda Alpha Epsilon – Gamma Delta (LAE-GED) Chapter of the American Criminal Justice Association (ACJA) gathered to display more than 40 trophies their team earned  en route to also capturing the Sweepstakes Trophy in the Spring 2021 ACJA/LAE Region III Virtual Conference. This was the 19th consecutive time the team has won the regional competition.

WARRENSBURG, MO – The University of Central Missouri Lambda Alpha Epsilon – Gamma Delta (LAE-GED) Chapter of the American Criminal Justice Association (ACJA) continued its domination over teams from other colleges and universities by capturing the Sweepstakes Trophy in the Spring 2021 ACJA/LAE Region III Virtual Conference. The competition took place April 3-17, and UCM grabbed its 19th consecutive regional win to continue a competitive streak that showcases the high-quality students and faculty who are part of the university’s criminal justice and criminology program.

In an event that gave out 90 different awards, UCM faculty and students in the Harmon College of Business and Professional Studies School of Public Services cumulatively earned more than 40 different individual and team honors while amassing 79 total trophy points. They won the competition by a wide margin, beating out the team with the second highest trophy point total, Fort Hayes State University, by 36 points.

Criminal Justice student Scott Kloiber led UCM by winning the Top Academic Award. This is calculated according to the number of trophy points earned for academic testing. Another team member who was highly successful in the competition was alumnus Derek Schwartz, who received the Top Gun Award for his performance in firearms events. UCM participants in this competition utilized firearms facilities at three different Missouri locations in order for all team members to participate in this important category.

Gregg Etter, a professor of criminal justice who serves as UCM LAE-GED team adviser, and who was one of the professional competitors, said the competition was originally scheduled for Garden City, Kansas, in October 2020 but was cancelled due to COVID-19. The virtual competition was centered in Hays, Kansas. To make this year’s event safer amid the pandemic, for the first time in the region’s history, members of each participating institution remotely recorded their results in various events.

“Region III is the only region who held this type of competition. This shows the intense dedication of the faculty in our region that they are willing to think outside the box and create opportunities for students to be engaged and active,” said Lynn Urban, professor of criminal justice and criminology and chair of the School of Public Services.

Approximately 40 UCM students and faculty members represented UCM. While they did not participate in every category, the competition included five academic exams on criminal law, policing, juvenile justice, corrections and LAE knowledge. Other competitive events dealt with knowledge and skills in crime scene investigation, physical agility, and firearms, and there was an opportunity for students to create and submit for judging academic posters.

Calling the competition a “bare-knuckle brawl” considering the number of competitors and the high level of knowledge and skills among the participants, Etter said, “I’m always proud of our students. They always give their best, and you never know which one will be the best.”

While Kloiber and Schwartz were highly successful, other students and faculty received a number of awards. Under the point system, a first-place finish was good for three points, second place, two points, and third place, one point.   Here is how UCM participants finished in lower, upper and professional divisions:

While UCM continues its string of regional wins, it is hoping for an opportunity to return to national competition in spring 2022. The competition is not taking place this year due to COVID -19. UCM has a record 18 consecutive wins at the national level.