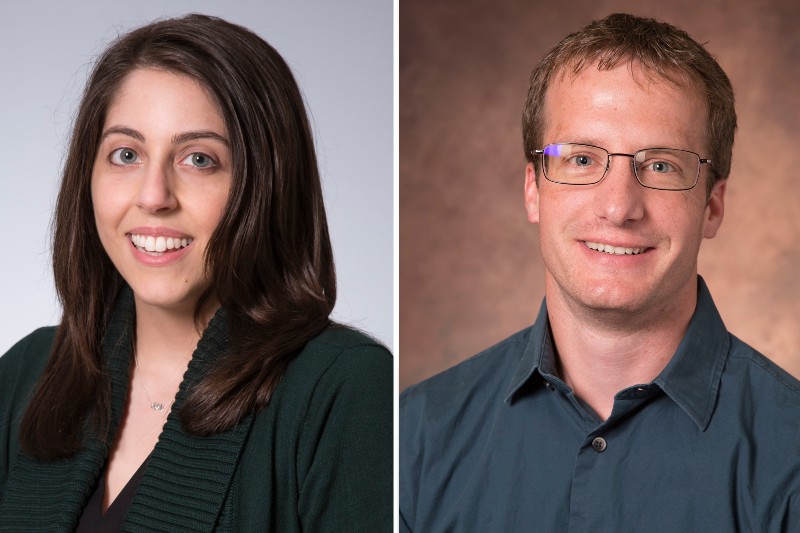 WARRENSBURG, MO – Recognizing the important role faculty and staff members have in keeping students on the right path to graduation, two University of Central Missouri employees have been recognized as recipients of Outstanding Academic Advisor Awards.

Honorees are Jacqueline Carter, an academic success advisor working with students enrolled in programs in the Schools of Technology; Aviation; Communication, History and Interdisciplinary Studies and Dr. Matthew Garver, a faculty mentor to students in the Bachelor of Science in Kinesiology program in the School of Nutrition, Kinesiology, and Psychological Science. In addition to being recognized by UCM, both of these award winners are nominated for state, regional and national awards, hoping to build upon the university’s history of award winners beyond the UCM campus. The awards were recently presented by Provost and Vice President of Academic Affairs Phil Bridgmon, whose office sponsors the awards program.

Carter became an academic success advisor in 2017, and has served in that capacity for the past four years. She began her service at UCM in February 2015 as an office professional for the International Center. In 2016, she became the student services coordinator for the College of Health, Science and Technology (CHST), where she worked closely with CHST advisors.

“It is such an honor to have been nominated by members across our UCM community.  I am grateful to be supported by staff, faculty, and my students,” Carter said in talking about the award. “Through the application for this award, I was able to reflect on the work I do as an academic success advisor, and it was so rewarding to look back on my experience so far.  This process allowed me to remember all of those little moments I have had with students and colleagues that did not seem to matter at the time but made all the difference in the relationships I have built. Through the tears, laughter, and celebrations of my four years of advising I have met so many mentors deserving of this award, so I am deeply touched that my name will be added to the list of recipients.”

One of the individuals who nominated Carter for the award mentioned her willingness to go put in extra work to build relationships with students and her colleagues. They added that they have “watched students go from struggling to thriving when she works with them.” Nominations also cited her willingness to teach a University Reset course for students who have been academically suspended, and her work in creating and managing the professional development website for academic advisors. She also was elected this year to serve as vice president of communication for the Missouri Academic Advising Association.

Success advisors may work with students on a variety of different issues that impact their education, but Carter said one of the main ways she meets their needs is to listen.

“UCM students come from all walks of life. Some students want to have someone to celebrate their everyday successes with, such as asking out a girl they were scared to talk to or nailing an interview, and some have more tragic experiences to share, such as homelessness or dealing with the loss of a loved one,” she said. “Whether it is in the classroom teaching University Foundations classes or meeting with a student in my office, I strive to be someone they can come to for every moment they want to share and support them through their college careers.”

Garver began work as a faculty member at UCM in 2016, and was coordinator for the Master of Science in Kinesiology program in 2017 and 2018, the same year he assumed his current post. In addition to serving on campus groups such as the Faculty Senate, for the past five years he has advised primarily undergraduate kinesiology majors with some students at the graduate level.

One UCM student noted in a letter supporting Dr. Garver’s nomination that he “routinely goes above and beyond for his students. He is extremely flexible, accommodating, and personable which always puts students at ease. He has helped me problem solve on multiple occasions and I’m so grateful to have him as a coordinator.”

Through other letters supporting his nomination, Garver was also recognized as someone who is eager to assist students with research, and has even helped them to succeed in gaining grant funds to pursue projects that have led to presentations at national conferences. He also was praised for his contributions to a smooth transition in advising structure by participating in training sessions, and developing tools such as advising sheets in five different areas of kinesiology to help students and advisors to better understand curriculum updates.

Garver spoke about what the Outstanding Faculty Advisor Award means to him, noting, “For me, those who I view as true mentors and advisors were life-changers. They inspired me, challenged me, and sometimes chiseled me a bit, too. They impassioned me; guiding how I formed my teaching philosophy, research endeavors, and approach to people. I can only hope what others have meant to me, I mean to the students whom I encounter. This is very meaningful, and I hope it reflects there is long-term change in the lives of my students and developing scholars.”

“I welcome many students into my office for school and life-related conversations. I enjoy chatting with students as we pass each other during walks (to and from) on our beautiful campus,” he said. Like many faculty members, however, as he gets immersed in his work and time melts away, the impact his efforts have on students may not always occur to him amid a hectic week.

As he put it, “Sometimes the academic days seem long, but there is no doubt the years feel short in comparison. We often don't see how investment today will bring fruit tomorrow, but it inevitably does.”