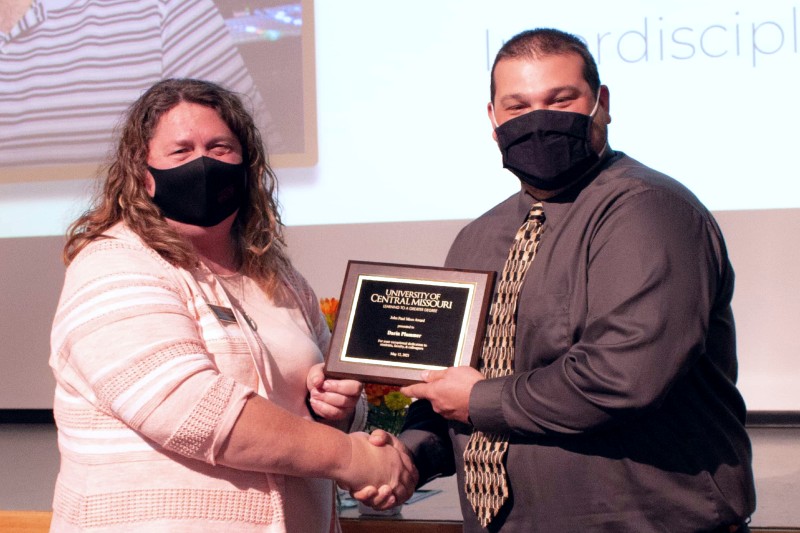 During the University of Central Missouri Staff Appreciation Breakfast on May 12, Darin Plummer, right, broadcast systems engineer for the School of Communication, History, and Interdisciplinary Studies, was presented the J.P. Mees Award for Outstanding Professional Staff by 2019 award recipient Michelle Taylor, generalist in the Office of Human Resources.

WARRENSBURG, MO – While many University of Central Missouri students and employees may not have met Darin Plummer, if they have ever watched a university special event online there’s a good chance they have experienced the product of his many hours of service through the Digital Media Production program. His dedication and commitment to such efforts recently contributed to his recognition as the 2021 recipient of the J.P. Mees Award for Outstanding Professional Staff.

Plummer was honored publicly during the Staff Appreciation Breakfast May 12 in the Elliott Student Union. His recognition was one of two awards presented during the program, which also included an opportunity to learn more about staff achievements throughout 2020-2021 and to introduce newly elected members of the Staff Council.

The J.P. Mees Award is the highest honor bestowed upon an exempt member of the university’s staff. It honors the legacy of the late John Paul Mees, who died in 2000 while serving as vice president of planning and policy/executive assistant to the president at UCM. Mees, a dedicated and motivated employee known for his friendly and outgoing personality, joined the university in 1988 as executive assistant to the president and professor of education. He also served as provost and vice president for academic affairs.

“Winning the J.P. Meese Award is very humbling. I greatly appreciated being nominated by my colleagues,” Plummer said in talking about his recognition. “After seeing the other deserving nominees, I am quite honored to have been chosen by the (award) committee.”

Plummer joined the university in July 2001. He came here as an Engineer II and worked for the Department of Communication and KMOS-TV through September 2003, after which he became event services manager for the University Union. He left the university in May 2008, but returned in November 2011, and since then he has worked as broadcast systems engineer for the School of Communication, History and Interdisciplinary Studies in the College of Arts, Humanities, and Social Sciences.

Nomination documents that were considered by the awards committee cited many examples of what makes Plummer an exceptional employee, who is deserving of the Mees Award.

One of his nominators stated, “Darin Plummer is truly dedicated to the mission of the Digital Media Production program. In addition to being a genuinely kind individual and colleague, Darin regularly (and selflessly) volunteers his time to help students inside and outside the classroom/labs. Specifically, Darin mentors students during live–studio and remote productions, such as UCM sporting events, and helps students learn and master the often-complex technologies and responsibilities involved in producing live-studio or remote programs.”

“Darin embodies Dr. Mees’ dedication to the university, service to students, professional activities and his community,” wrote one of his colleagues. “When Darin began his career as our broadcast systems engineer, we did not provide streaming and broadcasting services for athletic events, for commencement ceremonies, or for music and theatre. We did not stream and record events for area high schools, dance studios or state fair events. Today, we cover all those events, and central to their success is Darin Plummer.”

The nominator added that projects such as an online radio and television station were made possible thanks to Plummer’s efforts.  In the past year, he’s gone the extra mile to meet other important university needs.

During COVID-19, Plummer provided additional safety equipment and established procedures within the Digital Media Program so that face-to-face productions could continue. Additionally, he provided broad and narrow casting service to the Office of the President and the Board of Governors for their meetings, making it possible for individuals on and off campus to watch virtually as important decisions were being made. He also mentored and led student workers, and sought to make production labs available for students so that they could continue to work and produce content for their specific disciplines during COVID-19. This is in addition to writing grants that allowed the university to obtain more equipment for student and faculty use.

One nominator noted that Plummer has sought to provide safe broadcasting opportunities for sports broadcasting students over the past several months. “Working with faculty and coaches he has made sure that students had opportunities to practice their craft as well as make sure that the UCM sporting events are covered for the university, a task that has been difficult during the past year. His diligence in acquiring materials to sanitize the specialized broadcast equipment, maintaining environmentally safe labs and studios, and making sure meetings and events have been technically supported has made Darin an even more valuable asset to the university, School of Communication, History and Interdisciplinary Studies and the Digital Media Program.”