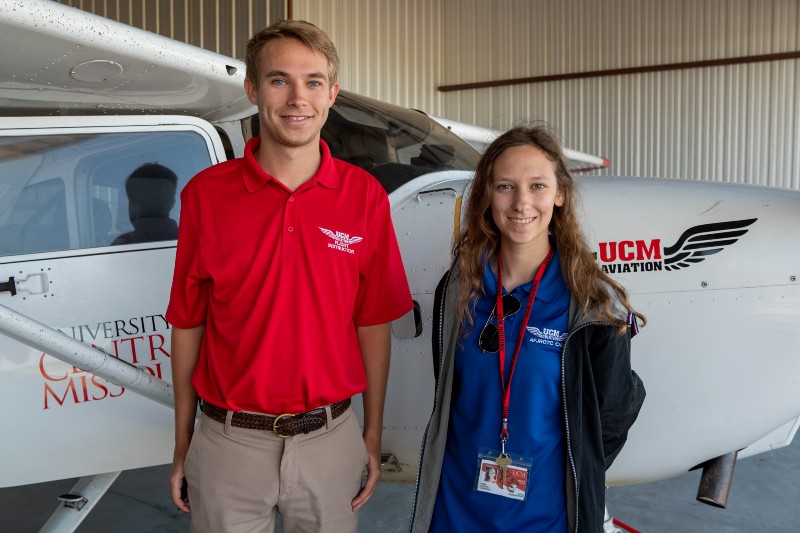 Paige McCarty, right, a 17-year-old student at Branson High School, who is shown with University of Central Missouri Certified Flight Instructor Keaton Rex, is spending her summer at UCM working toward her Private Pilot’s Certification as a participant in the Air Force Junior ROTC Flight Academy, Chief of Staff Private Pilot Scholarship program.

WARRENSBURG, MO – Only a year after many of them received their driver’s licenses, a group of young men and women who have been inspired and encouraged to pursue aviation careers will soon earn their Private Pilot’s Certification after successfully completing an eight-week summer program at the University of Central Missouri.

The group of 10 students – most of them preparing to enter their senior year of high school – are participants in the Air Force Junior ROTC Flight Academy, Chief of Staff Private Pilot Scholarship program. This initiative is part of a collective effort between the aerospace industry and the Air Force to help resolve the nation’s military and civilian pilot shortage while also giving students a valuable higher education experience. The Flight Academy also addresses issues such as the need for more diversity in an industry where women currently make up less than 5-6 percent of the pool of professional pilots and minorities only 10-12 percent.

David Jupp, an instructional faculty member in UCM’s School of Aviation who is working with Air Force JROTC cadets, said this is UCM’s first year to participate in the program. It began in summer 2018 with six institutions providing flight training. After the Air Force canceled it in 2020 due to the pandemic, it is continuing to grow and UCM is now one of 27 universities to host the Flight Academy.

This is not a summer camp, but a program that leads to 12 hours of college credit specifically for young people who are involved in Air Force JROTC. After making it through a rigorous selection process, students are provided a scholarship valued at approximately $22,500 to attend the Flight Academy, paying for transportation, room, board, academics and flight hours required in the program. It takes place at UCM May 31 to July 23.

“The Air Force is picking up the tab for all of this,” Jupp said. “It’s a good deal for the students because those who complete this program have a very high success rate in Air Force pilot training, so this helps them (Air Force)  to screen candidates for the pilot program.”

Jose Mercado, dean of the Harmon College of Business and Professional Studies, added, “We are delighted to participate in the Air Force Junior Reserve Officer Training Corps (AFJROTC) University Flight Academy scholarship program. UCM has outstanding Certificated Flight Instructors and the necessary fleet of aircraft to help the high school cadets earn their Private Pilot Certificate. We are more than happy to support the initiative of the U.S. Air Force to increase aviation diversity.”

Another benefit of the program, according to the Air Force JROTC Flight Academy website, is that each partnering university also has the potential to influence student participants to become future Certified Flight Instructors (CFI) who could assist with aviation training needs. One sixth of all licensed pilots hold a CFI rating, and the average tenure of a professional pilot student working as a CFI is approximately one year. An individual who successfully completes the Flight Academy could potentially provide a university that provides pilot training two to three years of service as a CFI before completing their college education.

Jupp said the Air Force seeks to provide opportunities for Private Pilot Certification training at facilities that are in close proximity to the student participants. Five participants at UCM are from Missouri, one from Arkansas, three from Colorado, and one from New Mexico. All taking their career ambitions seriously, they are part of a well-structured program that requires a lot of discipline to complete. 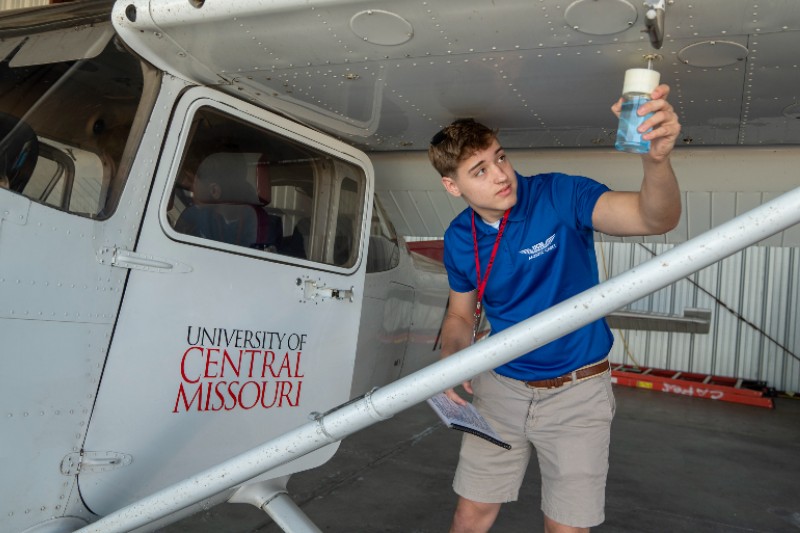 A student in the Air Force Junior ROTC Flight Academy at the University of Central Missouri, Bruce Reinhard, a senior at Falcon High School in Falcon, Colorado, conducts a pre-flight inspection of a Cessna training airplane he will be using as part of his preparation to earn his Private Pilot’s Certification.

A senior at Branson High School in Missouri, Paige McCarty is learning a lot about the dedication it will take to earn her Private Pilot’s Certification. While many of her friends may be sleeping a bit later this summer than they did during the past school year, she currently begins her day at the Aviation Academy after getting up at 5:30 a.m. After eating breakfast on campus, she and other students are transported to UCM’s Max B. Swisher Skyhaven Airport where they begin their pre-flight activities shortly after 7 a.m. This is followed by a briefing by her instructor, time in an airplane learning to fly, which is then followed by a de-briefing by her flight instructor. After eating lunch, she spends the afternoon in ground school, followed by a period of relaxation or study, dinner, and more study time.

Despite the demanding schedule, she said, “I’m definitely enjoying it. It would be a lot harder to get my pilot’s license without this training. There’s a lot of things I didn’t realize.”

McCarty hopes to use this educational opportunity to prepare for a career that combines her love for aviation with the medical field, while also serving her country.

“I want to be a medevac helicopter pilot,” she said. “I’m getting an EMT (Emergency Medical Technician) license right now and a bachelor’s in nursing. I also want to be a fighter pilot, I’ll take whatever I get.”

Keaton Rex, a UCM Certified Flight Instructor, appreciates the opportunity to work with students in the program who have a passion for flying.

During the Flight Academy’s first week of activities, Greg Hawkins, a UCM CFI, spoke briefly as he watched Bruce Reinhard, a senior at Falcon High School in Falcon, Colorado, conduct an early-morning pre-flight inspection of a single-engine Cessna training airplane. “We’ve had some basic aerodynamics and kind of got them fluid with the aircraft. We taught them about our pre-flight process here at UCM to ensure a safe flight environment. We taught them preflight procedures, and we’re currently working on positive aircraft control, getting that built up so that we can start getting into landings, and getting the students ready for their first solo.”

Reinhard said the colonel who oversees the Air Force JROTC program at his high school encouraged him to get involved in the program, particularly considering his aspiration to become a military pilot.

Like other students, he was excited about the opportunity to soon fly solo, but also what this means toward reaching his goal – to earn the Private Pilot’s Certification. As Reinhard put it, “It’s pretty invaluable. It’s a really big stepping stone to what I want to do.”

For more information on Air Force JROTC and the Flight Academy visit airunivesity.af.edu.