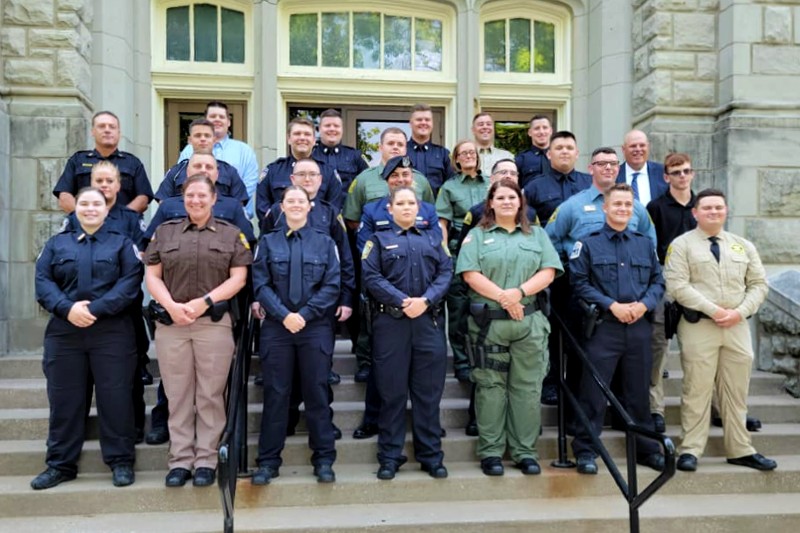 WARRENSBURG, MO – While fulfilling a vital need for well-prepared police officers who are now serving several area communities, the Central Missouri Police Academy (CMPA) at the University of Central Missouri celebrated a milestone when it graduated its 161st cadet class on June 19. All 25 members of the graduating class have found employment, making this the first time that 100 percent of the cadets were hired at the time of graduation. Additionally, all of the cadets passed their Missouri Peace Officer Standards and Training (POST) test to become Class A Licensed Officers.

The Central Missouri Police Academy, formerly known as the National Police Institute, was formed in 1971.  Early on, cadets only had to participate in 120 hours of training before going to work in their communities. The CMPA program now offers more than 840 hours of training and exceeds the POST requirements of 600 hours.  The curriculum engages practical application activities including responding to domestic violence calls, traffic stops, firearms training, defensive tactics, and crash investigation. Cadets also engage in training related to ethics in policing, constitutional and statutory law, social and emotional intelligence, dealing with mental and cognitive impairment, de-escalation, and communication techniques. The CMPA was also the first academy to partner with the Missouri State Highway Patrol to present two-day training on human trafficking. In 2020 and 2021, the CMPA was awarded funding through the CARES Act to convert its gymnasium into a technology learning classroom, providing distance learning availability and a forum for guest presenters. All of these activities create a professional atmosphere for cadets even before they begin interviewing for jobs in the field.

The CMPA offers three cadet classes annually – two full-time classes on UCM’s Warrensburg campus and one part-time class at State Fair Community College.  All three classes participate with resume’ writing activities, mock oral boards, and report writing activities to help cadets prepare for interviews. A “recruitment day” is held for each class with invited agencies from across the states of Missouri and Kansas to allow cadets to practice their interviewing skills in a speed-recruitment environment where each agency gets 10 minutes of interview time with every cadet.  It is an intensive day of interviewing for agencies and the cadets but has worked in improving presentation skills and allowed cadets to be visible to several agencies for potential employment opportunities. CMPA Director Tim Lowry, Assistant Director Cindy Schroer, and Office Professional Angela Ford work closely with the cadets to ensure they have complete information about the agencies they are interested in working for and help prepare them for their upcoming interviews.

The list below provides the name of each cadet and where they are now employed: