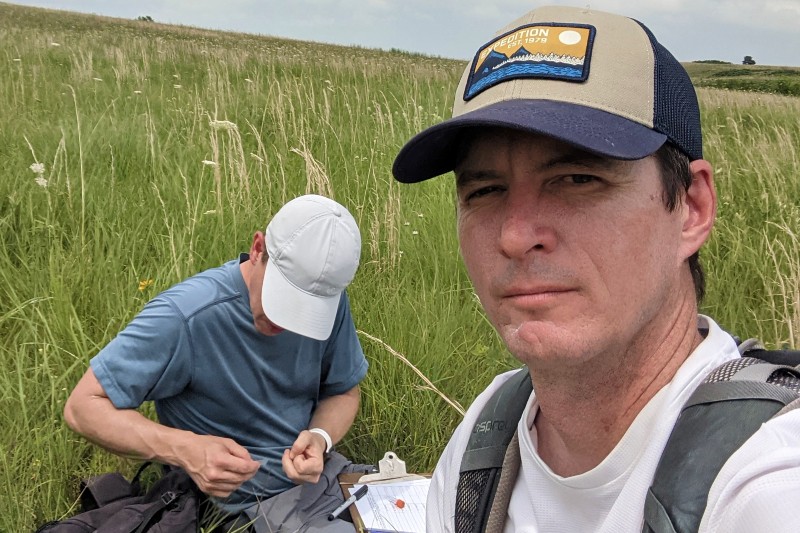 Assistant Professor Daniel Marschalek, Ph.D., right, who specializes in entomology at the University of Central Missouri, is conducting research in remnant tallgrass prairies near Sedalia related  to the conservation and management of regal fritillary butterflies. Shown with him working on the project for the Missouri Department of Conservation is Dan Wolcott, Ph.D., assistant professor of biology at UCM.

WARRENSBURG, MO – While admiring their beautiful color when seen fluttering between flowers in the meadow, issues threatening the survival of some native butterflies may not be on most people’s radar. But that’s not the case with University of Central Missouri Assistant Professor Daniel Marschalek, Ph.D. In studies that have taken him from California to Missouri, he’s looking for answers to questions that are necessary in the conservation and management of butterfly species in environments challenged by issues such as drought, soaring temperatures, and wildfires.

Marschalek specializes in entomology and is engaged in research targeted at the ecology of insects. Over the years, his work has included population-level studies designed to learn more about endangered species to help inform recovery efforts, and studies that are related to ecosystem functions such as pollination and decomposition.

While he has studied beetles and other insects, Marschalek’s butterfly research is getting noticed. In fact, it most recently landed him an interview for the “San Diego Tribune,” where he shared his expertise about the disappearance and potential return of the Laguna Mountains skipper to its native habitat. Factors that are driving the skipper to near extinction are close to the UCM faculty member. He studied this rare butterfly from 2013 to 2017 while doing post-doctoral research at San Diego State University.

“We were mainly trying to describe the habitat preferences or requirements for the skipper and trying to investigate and quantify a population size. There were only maybe five populations and possibly five meadows with the skipper remaining,” he said.

With such a small distribution, conservationists and researchers like Marschalek realized these butterflies were vulnerable in an ever-changing environment. They wondered just how these small critters are impacted by the effects of climate change, and particularly how California’s wildfires threaten the persistence of this subspecies, and what it means for the survival of other plants and animals in the butterflies’ ecosystem.

“There’s concern that one large fire could cause extinction of the skipper so we were trying to figure out where they were, what the general population sizes were, and also sample vegetation to get an idea what habitat preferences they have,” Marschalek said.

It has been four years since his initial population research, but this small butterfly with black wings and white spots has been missing from the location in which it was named since 1999, and is only found at four locations on the Palomar Mountain in San Diego County. While Marschalek’s research efforts are now focused on other butterflies, his previous efforts related to the skipper assist work that continues today by a coalition of conservationists and researchers with the San Diego Zoo, U.S. Fish and Wildlife Service, and the U.S. Forest Service. They are working diligently to return the skippers to their former range in the Laguna Mountains.

“The zoo is trying to move individuals over to the Laguna Mountains to reestablish another population. So, the thought here is that if they are successful, there will be populations in two different areas,” Marschalek said. Successfully doing so, he added, would lessen the possibility of one fire destroying all remaining populations and lead to their extinction.

While recognizing the difficulty in trying to resolve issues causing the decline in butterfly populations, Marschalek is still passionate about researching endangered species as demonstrated by a number of other projects in which he has been involved in recent years. In southern California, this included assisting the San Diego Zoo and U.S. Fish and Wildlife Service by developing and implementing monitoring protocols for Quino checkerspot butterfly caterpillars to determine if relocating caterpillars was successful, which it was. For nearly 20 years, he has monitored population trends and attempted reintroduction efforts for the Hermes copper butterfly, with more work planned for the future.

Additionally, he continues a project related to the Harbison’s dun skipper, and has received funding to support a UCM graduate student to help learn more about this butterfly that began to disappear after devastating wildfires in 2003 and 2007.

While California may provide a haven for butterfly research, Marschalek is also finding opportunities close to home. He is currently working with the Missouri Department of Conservation with regard to research on the regal fritillary, a large beautiful butterfly with dark wings with spots. It was once statewide but now confined to a few native tallgrass prairie habitats.

The Missouri Department of Conservation has provided funding to quantify population sizes and vegetation preferences. This is an effort that has been underway for two years and has taken Marschalek to remnant tallgrass prairies near Sedalia “trying to learn more about their requirements to reduce threats or enhance their habitat.”

“We conducted a marking study by catching butterflies with a net, and then marking them with a colored Sharpie to keep track of each individual so we can quantify the population size,” he said. “At the same time, Missouri Department of Conservation biologists were conducting more observational studies to try to estimate population sizes. So we are essentially doing the same thing two different ways and we want to compare the results to see if the much-quicker observational studies are essentially reliable.”

He pointed out that marking studies are often considered the ‘gold standard’ in butterfly population research, but this technique also is extremely time-consuming. If observational studies prove reliable, it can save researchers a lot of time while also reducing the cost of their study.

So why is butterfly research important? In an era where climate change is gaining more attention, Marschalek believes his work is helping to better understand the impact on the quality of the habitat that supports these small creatures, and what that possibly means for humans.

“They can be considered an indicator species, kind of like the canary in the coal mine,” he said about butterfly studies. “The appearance or disappearance of a particular species can give you an idea of at least how the ecosystem is changing, and how often it is changing.”