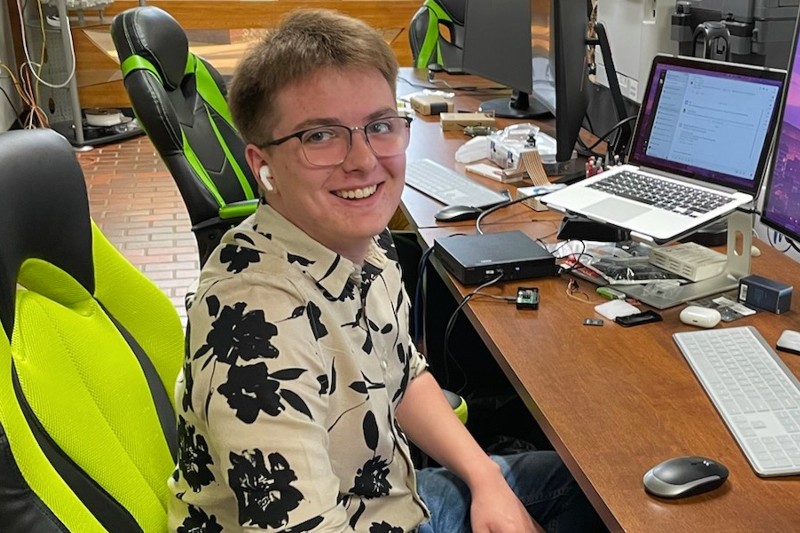 Evan Skalitzky, a student in the MIC software development program, is currently interning at Awnix.

Since its initiation in 2012, the Missouri Innovation Campus (MIC) program has received regional and national recognition and provided a pathway for metro-area young adults to earn sought-after skills and an accelerated bachelor’s degree, leading them to high-paying careers.

As the Missouri Innovation Campus program begins its 10th year, this unique partnership is staying focused on its original goals -- reducing college costs and debt for students, accelerating the time it takes to earn a bachelor’s degree, providing students with real-world learning experiences and developing a quality IT and engineering workforce for the Kansas City region.

“The MIC program remains to our knowledge the only workforce talent provider that allows students to receive a BS degree two years after high-school graduation and participate in a three-year, year-round internship,” said Stan Elliott, MIC director who also helped found the program.

The program includes business and civic partners, the University of Central Missouri, the Lee’s Summit R-7 School District and Metropolitan Community College (MCC). Thanks to this unique partnership, the MIC re-imagines students’ college experience with a focus on rigorous and relevant coursework as well as connecting businesses to a highly trained workforce. To ensure continuing success, curriculum is reviewed every other year to keep it on the leading edge of each industry.

Students enter the MIC program as high-school juniors by taking not only courses required to graduate high school but also college credit courses that position them to also earn an associate degree from MCC just after high-school graduation. Their final two years are dedicated to completing coursework at UCM with students earning their BS degree and entering the workforce with average salaries of close to $65,000 -- all at age 20 to 21.

Student debt is greatly reduced by several innovative components. MIC students’ first two years of college are tuition free while traditional room and board expenses are eliminated since the program is delivered at Lee’s Summit R-7’s Summit Technology Academy at the Missouri Innovation Campus in Lee’s Summit, at Metropolitan Community College or online. Students also are able to participate in three-year, year-round internships with their internship earning potential at approximately $35,000 over their final three years of college.

The MIC program has graduated six cohorts beginning with the 2012-16 graduating class, Elliott shared. “Ninety-eight percent of these graduates have accessed full-time employment and 91 percent were employed by the MIC business partner they interned with,” he added.

In 2012, the MIC launched with just one program -- systems engineering/networking -- and three business partners. Over the past nine years, the MIC has expanded to include more than 65 business partners and civic organizations as well as five programs -- software development, design and drafting, software engineering, cybersecurity and big data/business analytics. The MIC’s 10th cohort entered the program in June and will graduate in 2025.

Soon after its inception, the program was highlighted by President Barack Obama during a July 2013 visit to the Warrensburg campus designed to promote STEM workforce talent development.

“What’s happened at UCM is you’ve partnered with Lee’s Summit School District, with the Metropolitan Community College, with local healthcare, engineering, energy and infrastructure firms -- all industries that are going to drive job growth in the future -- and everybody is now working together to equip students with better skills, allow them to graduate faster with less debt and with the certainty of being able to get a job at the other end,” the former president told an audience of students, educators, business partners and community leaders. “That is exactly the kind of innovation we need when it comes to college costs. And I want the entire country to notice it. And I want other colleges to take a look at what is being done here.”

Since then, the MIC program has served as a model for similar programs throughout the nation and hosted numerous tours for education and industry leaders from throughout the world.