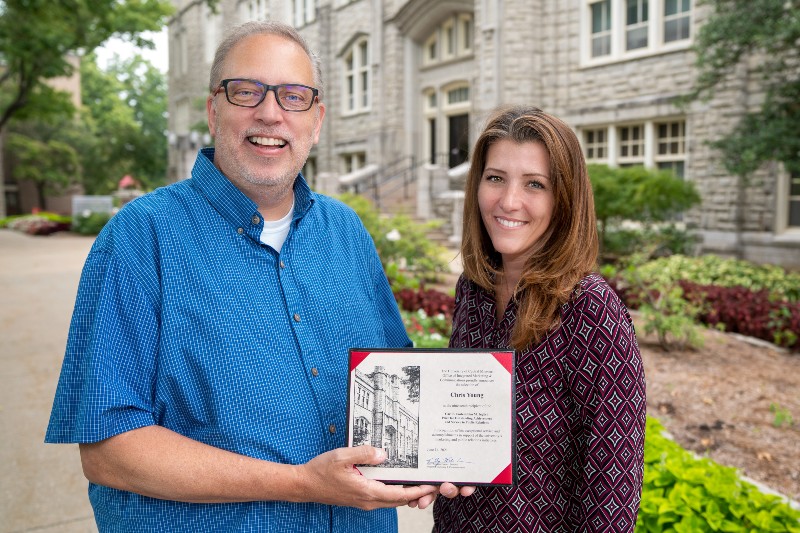 Chris Young, left, assistant director for web and digital marketing at the University of Central Missouri, receives the Foster-Inglish Award for Outstanding Achievement and Service in Public Relations from Kelly Waldram Cramer, director of marketing and promotion in Integrated Marketing and Communications.

Combining highly technical skills with strategic thinking, Chris Young was recently honored for his contributions to the University of Central Missouri and to the Office of Integrated Marketing and Communications (IMC). He is the 2021 recipient of the Foster-Inglish Award for Outstanding Achievement and Service in Public Relations.

Young is a UCM alumnus and a lifelong Sedalia resident who serves as IMC’s assistant director for web and digital marketing. He was recently recognized during an IMC staff meeting by Kelly Waldram Cramer, director of marketing and promotion.

The award was made possible by John Inglish, who, upon retiring in 2000 as university director emeritus of public relations, established an endowment through the UCM Alumni Foundation to honor his longtime friend and mentor, Carl Foster. A pioneer in university communications, Foster retired as director emeritus of public relations in 1986 after 19 years of service to the university. Inglish, a UCM alumnus and longtime Warrensburg resident, devoted more than 27 years to UCM’s Office of Public Relations (now IMC) before he retired.

“We are so fortunate that we have an award specific to our office to recognize one staff member each year for outstanding achievement during the previous school year, or for outstanding service to the unit over several years,” Waldram Cramer said.

Noting that Young has served in his position longer than anyone previously, she stressed that he oversees an area that’s “not for the faint of heart.” Many other individuals have given up when they faced the workload and pressure of his position, Waldram Cramer said. She added, however, that Young approaches his job with mule-like grit and a never-give-up attitude.

“He is a master of the art of asking ‘why’ and also the art of challenging a viewpoint in a respectful way,” Waldram Cramer said.

One of Young’s many strengths is strategic thinking, which he demonstrates regularly. He approaches issues from the “lens of what is best for the university and students, and you see this in his comments and work,” according to Waldram Cramer.

She also added about Young, “We have several really high-impact initiatives that he is working on this year and his enthusiasm to tackle these initiatives is inspiring. He knows these initiatives will require hard work, yet he is excited as he knows they will move the needle toward a better experience for students and the university.”

Young has served in his current role since 2017. He has a Bachelor of Science in Business Administration in Marketing Computer Technology from UCM. Prior to coming to UCM, he was the digital marketing director at Callis Integrated Marketing in Sedalia. Before taking on that role, he was chief operating officer for ComputerLand of Sedalia, where he helped launch I-Land Internet Services, introducing the Internet to much of West-Central Missouri.

In commenting on the award, Young said he was honored, and it was much appreciated. Known for his strong interaction and collaboration with other IMC staff, he also credited his achievement to a team effort.

“I'm particularly humbled to be listed among others who received this award before me. But I also recognize that it could have been justifiably presented to any number of IMC team members,” he said.

Young’s work took place alongside and with much interaction with professional colleagues across campus, all who endured one of the most challenging years in university history due to the pandemic. That, however, did not deter him from pushing forward.

“We all understand that this past year has presented great challenges. I'm pleased that we've not only weathered the storm, but also moved forward with projects to help the university to better meet its mission,” he said. "“We've introduced new and refined digital marketing strategies to better reach prospective UCM students with our compelling story, and we've recently embarked on a project to enhance our website's academic program pages and provide a better understanding of available career paths. But as much as anything, I've appreciated simply knowing that I can be a change agent both within and beyond our office. It's rewarding to know that your thoughts will be given consideration. That has been the case throughout my experience at UCM, and I greatly value it.”