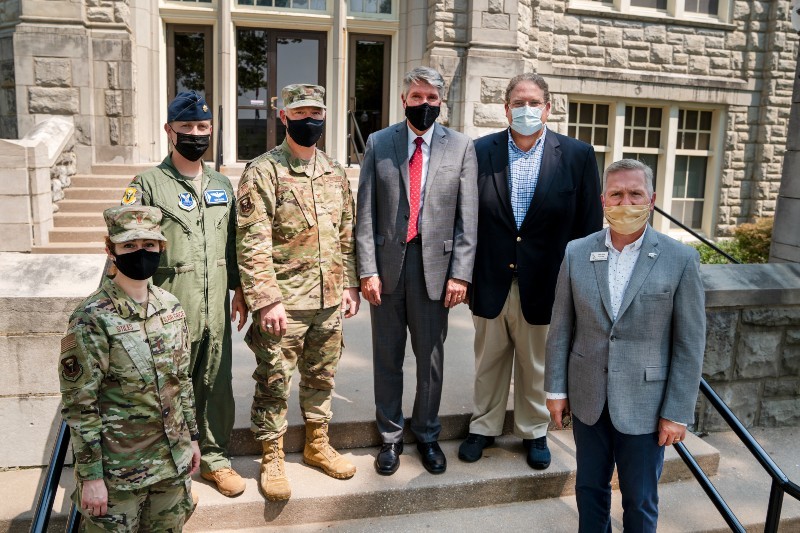 WARRENSBURG, MO – Continuing to build upon its relationship with the men and women who serve at Whiteman Air Force Base, the University of Central Missouri hosted a visit by Col. Daniel C. Diehl on Aug. 6. This was Col. Diehl’s first visit to UCM after officially taking the reins as commander of the 509th Bomb Wing during a ceremony June 16 at Whiteman AFB.

University President Roger Best invited Col. Diehl to visit campus. While he was at UCM, Col. Diehl and other base members were welcomed to the university by the president; Phil Bridgmon, provost and vice president for Academic Affairs, and David Pearce, executive director for Governmental Relations.

“UCM has a positive, long-standing relationship with Whiteman Air Force Base, and a tremendous appreciation for the men and women in the 509th Bomb Wing who serve our local communities while also defending our country,” Best said. “It is our honor to serve them and to work with them to achieve mutual goals. This includes providing the education our service members need to progress in their careers while on active duty and when they become veterans."

The military leader’s visit to UCM began with a meeting in the Administration Building in which Best, Bridgmon and Pearce discussed opportunities to work together in the future, as well as new programs such as UCM’s collaboration with the Air University Associate to Baccalaureate Cooperative to help military members who are seeking a Bachelor’s degree in an online format. Currently, this includes UCM’s program in Criminal Justice and Criminology.

The visit continued at the Military and Veterans Success Center, located in the Elliott Student Union. At this facility, they had an opportunity to learn about the extensive services provided through the Center to active-duty personnel, veterans, and dependents through a presentation by Courtney Swoboda, director of Military and Veterans Services. The Colonel also heard from Shomarri Taylor, director of the of the grant-funded Veteran’s Upward Bound Program hosted at UCM, and Denisha Campbell, office professional, and UCM students who are pursuing their university education while also serving in the military. The group finished their visit to UCM with a tour of the campus, allowing them so see a number of other facilities.

According to a news release issued by Whiteman’s Public Affairs office, Col Diehl transitioned to the bomb wing from Dyess Air Force Base in Texas, where he was commander of the 7th Operations Group, Air Force Global Strike Command’s largest B-1 bomb group. In his role at Whiteman, he is responsible for the combat readiness of the Air Force’s only B-2 Spirit wing and supporting installation functions.

Col. Diehl is a 1999 Distinguished Graduate of the U.S. Air Force Academy in Colorado Springs, Colorado, and has many other military education achievements. His Air Force career also includes service as a pilot logging more than 2,500 flight hours, providing experience flying the T-37 Tweet, T-38 Talon and B-1B Lancer. Additionally, he has accumulated 664 combat hours while serving in the Air Force.