UCM Board Joins CMPA in Celebration of 50th Anniversary 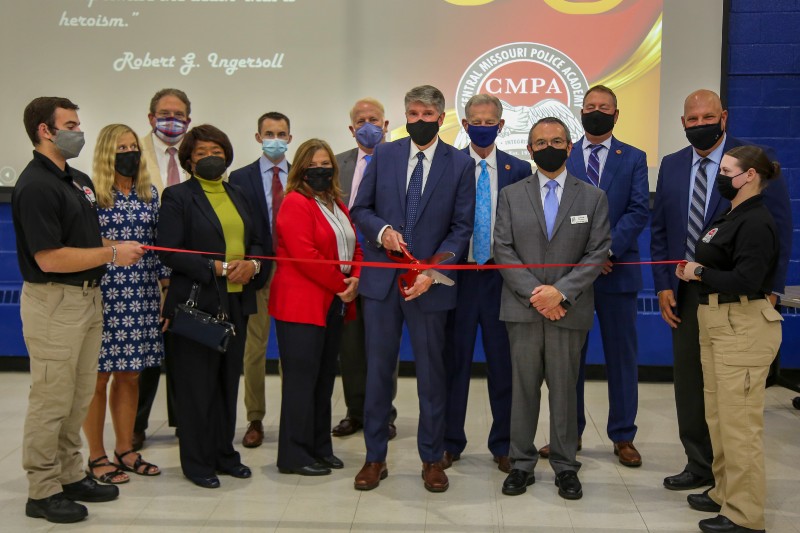 Holding a large pair of scissors, University of Central Missouri President Roger Best on Aug. 19  led a ribbon cutting to celebrate the 50th anniversary of the Central Missouri Police Academy and the dedication of its new high-tech classroom. Joining Best are CMPA cadets and program leadership, members of the Board of Governors, and the Harmon College of Business and Professional Studies.

WARRENSBURG, MO – Prior to its plenary session, Aug. 19, members of the University of Central Missouri Board of Governors joined Central Missouri Police Academy’s leadership, faculty, cadets and alumni in celebrating its 50th anniversary.

Prior to Pearce’s presentation, Abney opened the event, noting, “This 50-year anniversary that we observe is significant in the life of our great university. For 150 years, UCM has provided 'Education for Service' to thousands of students who have come here from all parts of the globe to receive training, certificates and degrees…Central Missouri Police Academy epitomizes the role UCM plays in equipping students with the knowledge, skills and aptitude they need to succeed in a challenging environment. In today’s uncertain world, communities cannot settle for anyone but the highest caliber individuals to protect and serve their citizens. Through five decades and 162 classes of cadets, CMPA has met the challenge of preparing quality, local police and county sheriff’s department personnel who have the ability to make a difference in the communities that employ them.”

He added, “The Board of Governors deeply appreciates the dedication and work of our CMPA cadets, faculty members and leaders. Thank you for what you do every day in service to our community, state and nation.”

Best also spoke about the academy’s role in preparing officers for public service; Kurt-Hilditch provided a brief history about the CMPA, adding that its last class of 25 cadets experienced a 100 percent success rate in graduate employment. Bridgmon, Lowry and Wiggins also spoke about the value of the academy and its impact in the preparation of law enforcement personnel to serve citizens. For some of them program graduates, that also meant paying the ultimate sacrifice to serve and protect others.

Three cadets from the current class, Lt. Hanna Sawyer, Warrensburg; Class Commander Ethan Douglas, Independence; and Class Captain Aubrey Gutherie, who is also a member of the Whiteman Air Force Base security team, recognized five individuals who graduated from the CMPA and died in the line of duty. These officers included Mike Mosher, who died while attempting to arrest a hit-and-run suspect in Overland Park, Kansas, in 2020, and Clinton police officers Gary Lee Michael, Jr., and Christopher Ryan Morton, who died in 2018 of gunshot wounds they sustained after responding to a 911 call at a Clinton residence. Also included were Miller County Deputy Sheriff Sandra Belle Wilson, who was shot and killed in 1991 in California, Missouri, while participating in a day-long search for a suspect, and Cass County Deputy Sheriff Kevin M. Mayse, who died in 1995, four days after sustaining injuries in a vehicle crash that occurred during a pursuit.

The ribbon cutting was an opportunity to call attention to the collaborative efforts between UCM offices that led to the creation of the new classroom. Lowry worked with Ray Walters, multimedia coordinator in the Office of Technology, to transform what was previously a gymnasium into a “classroom in the round.”  Serving as the main training room for CMPA, enhancements to this space were made possible with the assistance of federal funding. This included approximately $150,000 spent on technology and about $15,000 for construction, according to Walters.

“This was 100% covered by CARES (Coronavirus Aid, Relief, and Economic Security) funds and put directly in to use for social distancing needs in light of COVID-19,” he noted prior to the 50-year celebration.

“This setup places the educator in the middle of the room with the students gathered around them. From a mobile podium, the educator teachers and roams around the room,” Walters said. “On every wall, we installed large projector screens that use state-of-the-art laser projection to share course content. No matter where a student sits in the room they can see both the educator and the screen.”

“Lastly, we installed two cameras for remote viewing and recording,” Walters said. “Educators are given wireless microphones to both communicate to distance attendees as well as voice amplification in the gym itself.”

The newly renovated area allows CMPA to accept more cadets into the program. It offers more space for both-in-person attendance and social distancing.
The CMPA is part of the Missouri Safety Center within the Harmon College of Business and Professional Studies at UCM.