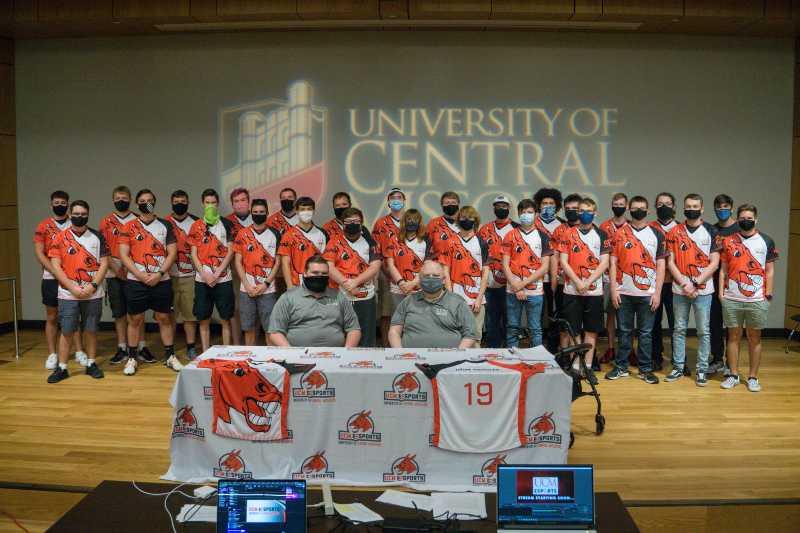 The ceremony on Aug. 21 was attended by 28 team members and their families, and took place in the Elliott Student Union Auditorium. Ranging in class rank from freshmen to seniors at UCM, each team member who participated in the signing event received their team jersey in addition to a $500 scholarship to assist them with their university education while they take part in collegiate video gaming.

UCM Esports was launched in the fall 2019 under the leadership of Shattuck, who divides his time between instructing students in mathematics and serving as team coach. The program is open to all UCM majors, and serves as an outlet for students who have a competitive passion for video games, and enjoy team play. Interest in collegiate-level competition has grown significantly nationwide, with colleges and universities including UCM joining the National Association of Collegiate Esports, headquartered in Kansas City.

He pointed out previous and current team members mention that being a part of the UCM Esports Team has given students pride in UCM, and “they are excited to get to compete for their university.”

UCM Esports began its inaugural year with three teams, Overwatch, League of Legends, and Rocket League, but interest has continued to grow and other games have been added. As the fall 2021 season unfolds UCM Esports includes one new team, Hearthstone, in this year’s competition mix along with the three original teams and two teams added in 2020, Super Smash Bros. Ultimate and Rainbow Six Siege.

Members of the fall 2021 UCM Esports teams, along with their year at the university, major, and hometown are as follows:

The signing ceremony gave students an opportunity to formally add their signatures to UCM Esports Player Agreements, which outline expectations of team members.  Students who participate learn about self-discipline, collaboration and team building, and also serve as ambassadors for UCM through their participation.

Individuals who take part in UCM Esports adhere to standards similar to students who take part in varsity athletics programs. They must meet criteria that include being enrolled in at least 12 semester hours throughout the academic year; completing at least 24 hours toward a degree each academic year; successfully achieving a cumulative GPA of at least 3.0; and attending classes regularly, completing homework on time, and communicating with professors about game days.

While a number of competitive activities await UCM Esports this semester, team members are currently gearing up to host in cooperation with the U.S. Army National Guard and Central Missouri Intramurals the Super Smash Bros. Ultimate Tournament from 6 to 10 p.m. Wednesday, Sept. 1, in the UCM Student Recreation and Wellness Center. A $1,500 prize pool is available in the competition that is open to high school, college and alumni-level competitors. Use the Google Form to register free. The deadline is 4:59 p.m.  Aug. 31.

Anyone who has questions about UCM Esports is encouraged to contact Shattuck at 660-543-8763 or ucmesports@ucmo.edu.