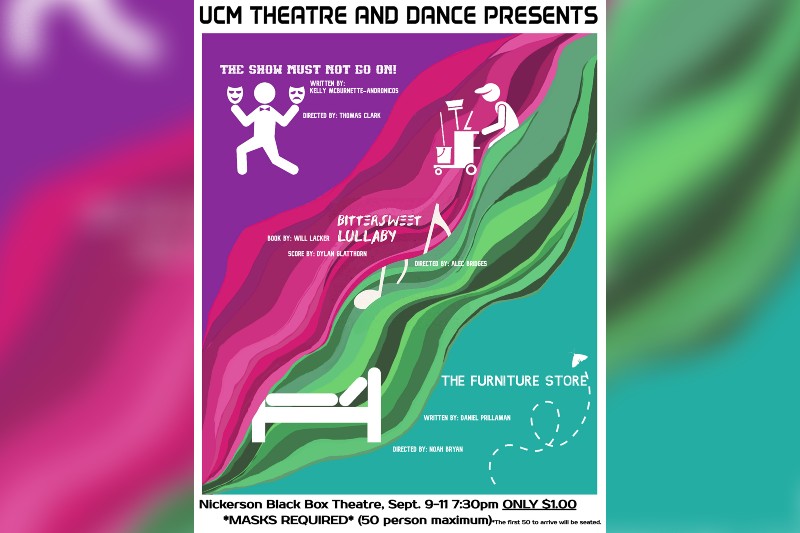 WARRENSBURG, MO – Enjoy an evening  of entertainment as University of Central Missouri Theatre and Dance presents a night of Studio Theatre 10-minute plays at 7:30 p.m. Sept. 9, 10, and 11 in the Nickerson Black Box Theatre, located on the first floor of Nickerson Hall.

These one-acts are performed, directed, and designed entirely by UCM students. The plays being presented are “The Show Must NOT Go On!” by Kelly McBurnette-Andronicos, “Bittersweet Lullaby” by Will Lacker and Dylan Glatthorn, and “The Furniture Store” by Daniel Prillaman.

“The Show Must NOT Go On!” is a play about a play. A community theatre production of “Hamlet” has gone off the rails with the sudden departure (arrest) of one of the key actors. Upon hearing this news, the long-tenured theatre Janitor, played by Katie Marshall, convinces the two remaining actors, A, played by Alex Scharfenberg, and B, played by Holden Childress, that she is exactly what they’re looking for. The actors are unconvinced, but with no other choice, they let the Janitor take the stage, and they aren’t prepared for the mayhem that follows.

“The Show Must NOT Go On!” is written by Kelly McBurnette-Andronicos and directed by Thomas Clark with technical design and technical direction by Alec Bridges.

“Bittersweet Lullaby” tells the story of two struggling songwriters, a Man, played by Finn Juliano, and a Woman, played by Alyce Wilson, who live in the same apartment, but decades apart. One night, their voices connect through time and they begin a collaboration that leaves them forever changed. In a story about past, present, and future, the songwriters discover that they are just as much a part of themselves as those who have come before and those who have yet to come.

“Bittersweet Lullaby” is written by Will Lacker with music from Dylan Glatthorn. The play director is Alec Bridges with technical design and technical direction by Luke Englert.

“The Furniture Store” is a comedic short play that follows a couple, Toni, played by Rachel Curry, and Sylvia, played by Sapphire Engel, who buy furniture from Kenneth, the sole employee of The Furniture Store, played by Zachariah Bowen. The story is moved along by the Stage Directions, played by Miranda Muenz, and there is a special last-minute appearance of another customer at the store, named Kyle, played by Phil Licata.

“The Furniture Store” is written by Daniel Prillaman and directed by Noah Bryan with technical design and technical direction by Kelsi Richardson.

The faculty advisors for these Studio productions are Dr. Aaron Scully and Jennifer VanBuskirk.  Tickets are $1 (cash only) and are only available at the door. Due to the size of the space and limited seating, as well as limited capacity requirements, arriving at least 30 minutes in advance is strongly recommended. Masks are required to attend this performance. Doors will open at 7 p.m. each night and the show will begin promptly at 7:30 p.m.