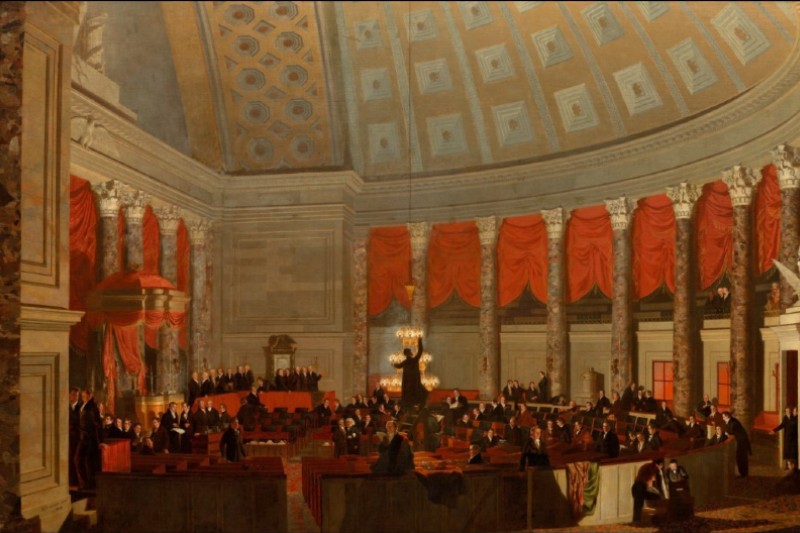 “The House of Representatives,” a painting by Samuel F.B. Morse from 1822, courtesy of the National Gallery of Art,  depicts Missouri's legislature in its early stage and is reminiscent of  what visitors will encounter when viewing the Struggle for Statehood, Missouri’s Official Bicentennial Exhibit, Sept. 22-Oct. 26 at the University of Central Missouri-Lee’s Summit.

WARRENSBURG, MO – An opportunity to learn more about the challenges Missouri’s founders faced more than 200 years ago, the University of Central Missouri is bringing to the Kansas City area the Struggle for Statehood, Missouri’s Official Bicentennial Exhibit.  This free, public exhibit will be on display at UCM-Lee’s Summit at the Missouri Innovation Campus (MIC), 1101 NW Innovation Parkway, Sept. 22 to Oct. 26. It will be supplemented with a virtual bicentennial keynote presentation Sept. 23, and an in-person lecture Oct. 16, providing more insight into Missouri’s pathway to becoming the nation’s 24th state.

The Struggle for Statehood is being presented through the efforts of faculty members in the UCM History Program with support from the Missouri Humanities Council, MIC, and the UCM Center for Teaching and Learning, which has provided funding for the lecture and online presentation.

“It’s truly an honor that UCM was selected as one of the stops for the exhibit during the 2021 bicentennial year,” said UCM Professor of History Jon Taylor, Ph.D., who has played a key role in planning and seeking funding for the event.

Along with the display at the MIC, the virtual presentation at 6:30 p.m. Thursday, Sept. 23, features Dr. Tai Edwards, associate professor of history at Johnson County Community College, and author of the book, “Osage Women and Empire: Gender and Power.” Her presentation titled “Osage Nation and Missouri Statehood” can be viewed online by clicking on the virtual link. Interested individuals also can stop by the MIC at the time of the presentation and watch it in conjunction with the Struggle for Statehood Exhibit.

Dr. Chris Childers, associate professor of history at Pittsburg State University and the author of “Failure of Popular Sovereignty,” will make a presentation at
11 a.m. Saturday, Oct. 16 at the MIC. His remarks will focus on “Sectional Tension and the Missouri Compromise of 1820.”

Taylor said the importance of the exhibit is two-fold. First, viewers can get a sense of the significant role that Missouri has played in the nation's history and the sectional struggle that developed when it became a state. Second, it also supports the university’s longtime role in sharing Missouri history. The event is taking place at the same time UCM is celebrating its sesquicentennial.

“The exhibit, while it does not mention UCM faculty by name, also honors the scholarly contributions that UCM history faculty members like Drs. C. H. McClure, William Foley, Perry McCandless, Roy Stubbs, and Leslie Anders among others, have made to the study of the history and significance of Missouri History since the founding of the institution in 1871,” Taylor said.  “Current UCM History faculty continue to make scholarly contributions to the study of Missouri history, which is still passed on to the general public by hosting public exhibits like the Struggle for Statehood, and, most importantly, to the students who either go on to major in history or who go on to teach history in the public and private schools of the state.”

Individuals who want to know more about the Struggle for Statehood exhibit are welcome to contact Taylor in UCM’s School of Communication, History, and Interdisciplinary Studies at taylor01@ucmo.edu.