UCM Theatre and Dance Offers Season Tickets for 2021-2022 for ‘Live On Stage!’ Performances 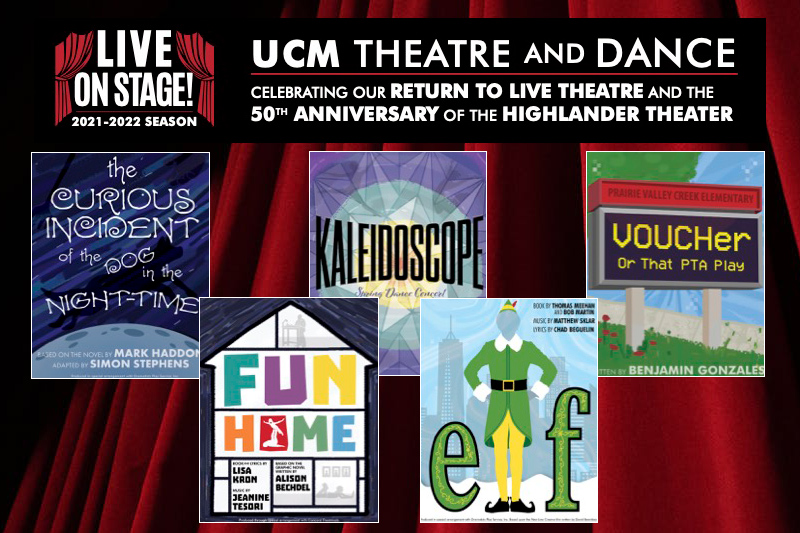 WARRENSBURG, MO – University of Central Missouri Theatre and Dance has announced the availability of 2021-2022 season tickets through Oct. 16. After a year of limitations to live performance, UCM Theatre and Dance is excited to invite the community back to experience theatre “Live On Stage!”

To ensure the safety of everyone, UCM theaters will be limited to 75% capacity and all seating will be general admission to provide audiences the opportunity to socially distance themselves. Currently, masks will be required for audiences. COVID-19-related policies will be re-evaluated throughout the academic year by university leadership and could possibly be changed. Current COVID policies can be found on the UCM website.

The past 18 months have been quite a journey for theatre practitioners everywhere. With this in mind, UCM Theatre and Dance has selected five plays and musicals for this season that are about the journeys people take to overcome life’s challenges. Season tickets are available for the five exciting shows. A season subscriber receives substantial savings, choice seating, ticket insurance and exchange privileges.

Season tickets include four mainstage productions and the dance concert for $80 for the general public; $60 for faculty, staff, senior citizens, and military; and $40 for students. The production of “The Curious Incident of the Dog in the Night-time” will be performed at Hendricks Hall and all other productions will be performed in the newly renovated Highlander Theatre, both on campus.

A brand new aspect of this season is the inclusion of Pay-What-You-Can performances.  Each Sunday matinee performance audience members can pay $1 or more for a ticket to the show.  These tickets may be purchased at the box office or online.

The season opens in Hendricks Hall with UCM Theatre and Dance presenting the play “The Curious Incident of the Dog in the Night-Time,” opening on Oct. 8 and running until Oct. 16. In this play, the audience sees the world through the eyes of the extraordinary 15-year-old Christopher, who is determined to solve the mystery of who killed his neighbor’s dog. Funny and moving, this play is based on the popular novel of the same name by Mark Haddon and adapted for the stage by Simon Stephens. Mary Trotter will direct.

The musical version of the modern class Christmas film, “Elf,” aptly titled, “Elf the Musical” is planned for Nov. 12-20.  In this presentation, the main character, Buddy, believes he is an elf, but his massive size and poor toy-making abilities cause him to face the truth that he is actually human. This revelation sends him on a journey to New York City to find his birth father and discover his true identity. Based on the New Line Cinema film written by David Berenbaum, and book by Thomas Meehan and Bob Martin, music by Mathew Sklar and lyrics by Chad Beguelin, “Elf The Musical” will be directed and choreographed by Ashley Miller-Scully, with musical direction by Dr. Jacob Sentgeorge.

From Feb. 24 - 27, Theatre and Dance will present the world premiere production of “VOUCHer: Or, that PTA Play” by UCM faculty member Benjamin Gonzales. The play begins with a new school year and the Prairie Valley Creek Elementary Parent Teacher Association is short on parents because they were all lured away by The Happy Bridges Charter Academy. On the lighter side of a dark comedy, the play follows the comings and goings of the small group of parents as they try to re-level the playing field.  The play is directed by Dr. Aaron Scully.

The following spring show, April 1-9, is “Fun Home,” a refreshingly honest, wholly original musical about a woman who sees her parents through grown-up eyes. When her father dies unexpectedly, graphic novelist Alison dives deep into her past to tell the story of the volatile, brilliant, one-of-a-kind man whose temperament and secrets defined her family and her life. Moving between past and present, Alison relives her unique childhood playing at the family’s Bechdel Funeral Home. Based on the novel written by Alison Bechdel, with music by Jeanine Tesori and book and lyrics by Lisa Kron, this production is directed by Mary Trotter.

Presented April 21 -24,2-2022 and closing the “Live On Stage!” season is another fresh and creative dance concert directed by Ashley Miller-Scully titled “Kaleidoscope.” Color can often be one of the most exciting and informative tools an artist can use to express themselves, create mood, convey a message, or portray an emotion that profoundly affects the viewer. The theatre choreographers will find their inspiration on the color wheel and collaborate with art and music students to create original dance, music and visual art.