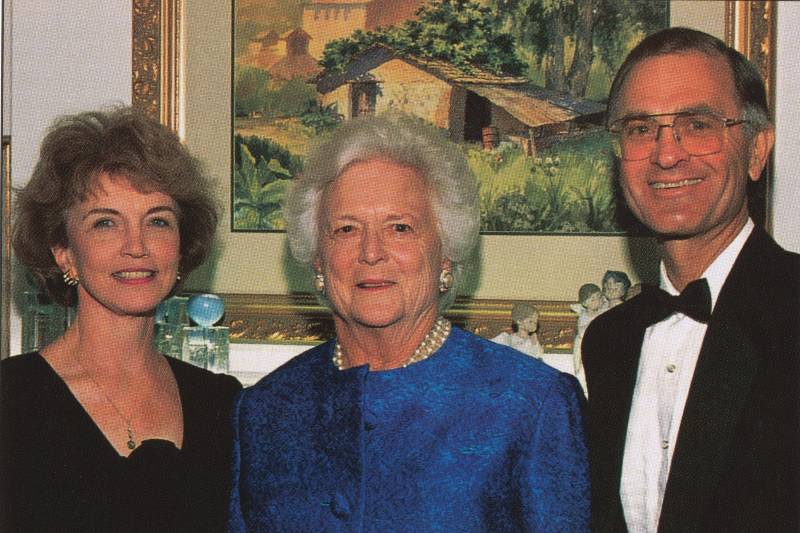 In this photo from the 1990s, then Central Missouri State University President Ed Elliott (right) and First Lady Sandra Temple Elliott (left) enjoy a visit with former United States First Lady Barbara Bush before she spoke on campus. Insights into the university presidencies are included in the KMOS documentary “Mule Tracks: UCM After 150 Years,” premiering at 7 p.m. Tuesday, Oct. 19 on the University of Central Missouri’s public television station, KMOS-HD 6.1.

WARRENSBURG, MO – In celebration of the 1871 founding of the University of Central Missouri, originally known as State Normal School No. 2, KMOS-TV has produced an in-depth history drawing on official archives, historian interviews, and recollections of current and former university leaders. Narrated by Marion "Woody" Woods (1450 KOKO/98.5 The Bar,) “Mule Tracks: UCM After 150 Years” details significant events in the evolution of the university’s academic structure and the growth of the campus. This program will premiere on KMOS-HD channel 6.1 at 7 p.m. Tuesday, Oct. 19. A public screening also will take place during Homecoming at 2 p.m. Friday, Oct. 22, in Nahm Auditorium. Other airdates and information is available at kmos.org/ucm150.

Beginning with the establishment of the State Normal Schools by the Missouri legislature, this documentary follows the progression of the institution through many changes. Originally founded to train public school teachers, State Normal No. 2 was granted status in 1919 as the four-year Central Missouri State Teachers College. It quickly grew to become Central Missouri State College in 1946, then attained university status in 1972 to reflect its expanding campus, curriculum and enrollment. In 2006 the name was modified to signal a mission beyond the region, turning CMSU into UCM. After opening 150 years ago with an enrollment of 30 students gathered on the second floor of the Warrensburg high school, UCM has grown to meet challenges of a changing world to become a university offering degrees in more than 100 majors to about 10,500 students annually.

KMOS-TV is a non-commercial public station serving the citizens of 38 central Missouri counties with high quality, educational content and experiences online, over-the-air and in our communities. KMOS-TV broadcasts programming on four channels throughout the region with programs for all ages on 6.1, lifestyle and how-to programs on 6.2, international news, documentaries and dramas on 6.3, and a full schedule of kid’s programming to fit the schedule of every busy family on 6.4.

Licensed to UCM, KMOS is integral to engaged learning as a professional learning lab for students from a variety of disciplines. In the spring of 2020, families seeking educational alternatives for their students with COVID-19 school closures looked to broadcasts of “KMOS Classroom: Summer School” for free lessons and materials. The 72-lesson series was a collaboration between KMOS and UCM’s College of Education.