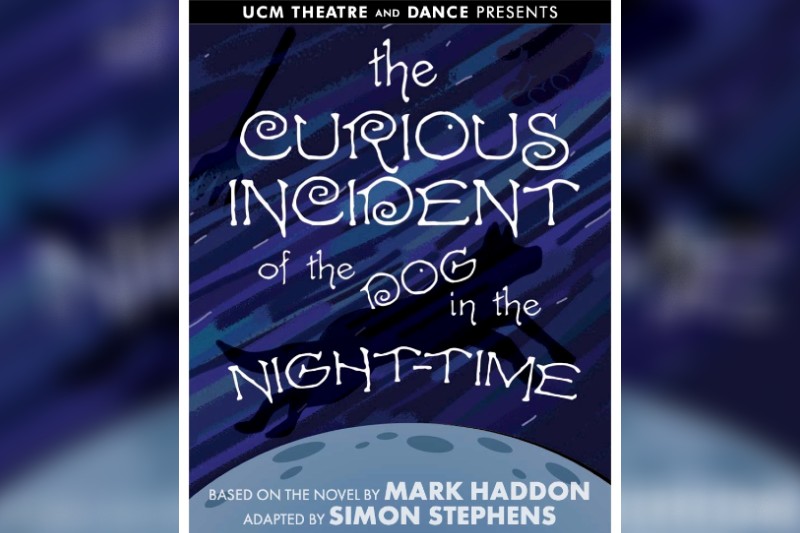 WARRENSBURG, MO – University of Central Missouri Theatre and Dance will present the 2015 Tony Award-winning drama, “The Curious Incident of the Dog in the Night-time.” Based on the best-selling book of the same name written by Mark Haddon and adapted for the stage by Simon Stephens, this play follows a neurodivergent boy as he tries to solve the mystery concerning the death of his neighbor’s dog. The play performs at 7:30 p.m. Oct. 8- 9, with the 9th including an American Language Services (ASL) interpreter; 2 p.m. Oct. 10, which the is first Pay-What-You-Can show at UCM, and at 7:30 p.m. Oct. 14, 15, and 16 with the show on the 14th being a Sensory Sensitive Performance for anyone uncomfortable with drastic changes in lights and sound.

In the play, 15-year-old Christopher has an extraordinary brain. He is exceptional at mathematics but ill-equipped to interpret everyday life. He has never ventured alone beyond the end of his road, he detests being touched, and he distrusts strangers. Now it is seven minutes after midnight, and Christopher stands beside his neighbor’s dead dog, Wellington, who has been speared with a garden fork. Finding himself under suspicion, Christopher is determined to solve the mystery of who murdered Wellington. He carefully records each fact of the crime. His detective work, forbidden by his father, takes him on a thrilling journey that upturns his world.

When asked about the production, Director Mary Trotter stated “The play really allows us to see the world through the eyes of a character that we don’t often see in the theatre. This makes the play unique because the audience gets to go on the journey with Christopher and experience the world as he sees it. It’s just a wonderfully written, wholly original script that is dramatic but joyful, heart-wrenching, funny and challenging.  I don’t think our community will have ever seen anything like it.”

Luke Habjan, a junior theatre technology major who plays Christopher noted about his role, “It’s a very important character to play because this is one of the first times I get to use my own neurodiversity as part of the character. This is Christopher’s story and this is what Christopher is.”

During the first Pay-What-You-Can performance, Sunday, Oct. 10, audiences may choose to pay any amount, $1 or above, for a ticket. UCM Theatre and Dance Chair Ashley Miller-Scully said that she is excited about this new initiative, “As we invite the community to join us “Live on Stage” we want to ensure that financial limitations don’t keep people from the theatre - we really want our entire community to enjoy what we do here.”

An ASL interpreter for the Oct. 10 performance will assist anyone who is hearing impaired that would like to attend. The Sensory Sensitive Performance on Oct. 14 features lighting and sound cues that are lightened so anyone uncomfortable with drastic changes can attend and enjoy the show.

Tickets are available at the box office outside the James L. Highlander Theatre, 10 a.m. to 3 p.m. Monday-Friday, by calling 660-543-8811 or online at ucmboxoffice.universitytickets.com. For any questions about tickets, please call 660-543-8811 or email boxoffice@ucmo.edu.