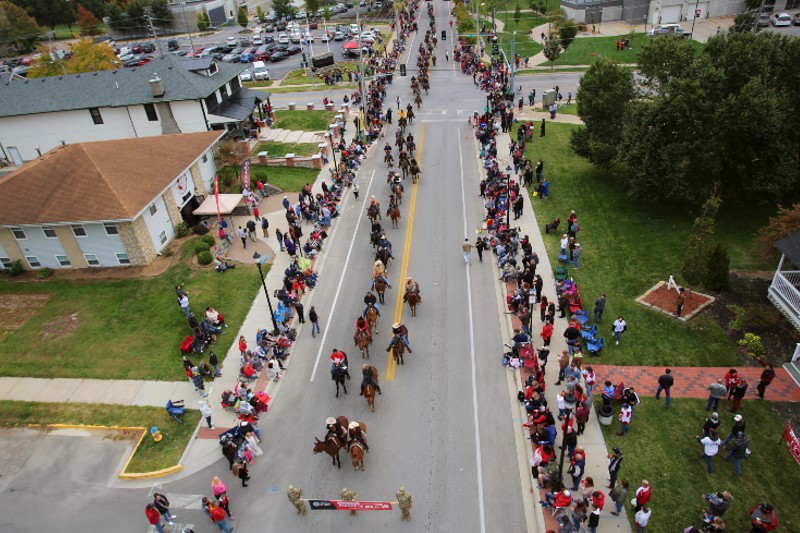 An aerial view of Holden Street shows a string of 50 mules and riders attempting to set a world record during the 2021 Homecoming parade.

WARRENSBURG, MO – While spectators lined the streets of downtown Warrensburg Saturday morning Oct. 23, to watch the attempt to achieve the GUINNESS WORLD RECORDS™ title for the largest ridden parade of mules, there was plenty more to cheer about as the University of Central Missouri celebrated its 2021 Homecoming. The week of activities included the Homecoming Royalty competition, as well as a number of other competitive activities that exemplify the university’s longstanding motto, “Education for Service.” Such events included a blood drive, the collection of thousands of food items to help students and families in need, and various community service projects.

With the university celebrating its 150th year, which includes its long relationship with the mule mascot, this year’s parade was unlike any in the past. Along with the usual array of floats, vintage motor vehicles, marching bands, and walking entries, 50 mules and their riders from many different communities across the state joined in the GUINNESS WORLD RECORDS™ attempt. The university will now wait for official confirmation regarding the record, which UCM sought to be the first to achieve.

Earlier in the week, nine student groups participated in the Donation Creation event that led to the collection of approximately 3,200 non-perishable food items for the Campus Cupboard. Each student group gathered food contributions to create a 3-D scene that represented this year’s Homecoming theme honoring UCM’s sesquicentennial. Creations were judged based on their creativity, relation to the theme, and originality. The winners were Alpha Gamma Delta and Theta Chi, first; Sigma Kappa and Tau Kappa Epsilon, second; and Alpha Sigma Alpha and Alpha Tau Omega, third.

Student groups also were instrumental in helping to collect 307 units of blood over a two-day period, Oct. 18-19, to support the Community Blood Center. Two student groups were instrumental in helping to sponsor this program, ParaMedico and American Medical Students Association (AMSA), which took place in the Elliott Student Union. Organizations recognized as the competitive leaders in this event were Alpha Sigma Alpha and Alpha Tau Omega, fist; Sigma Kappa and Tau Kappa Epsilon, second; and Alpha Phi and Alpha Kappa Lambda, third.

Nine community service projects that were conducted Oct. 20-21 were made possible through the efforts of 108 student volunteers who worked in cooperation with the Office of Student Activities’ Volunteer Services. These students contributed 216 service hours working on projects such as picking up trash in downtown Warrensburg and around campus, as well as transferring food items from the Donation Creation sites at the Student Recreation and Wellness Center, Elliott Student Union, Ward Edwards and Administration buildings, to the Campus Cupboard. 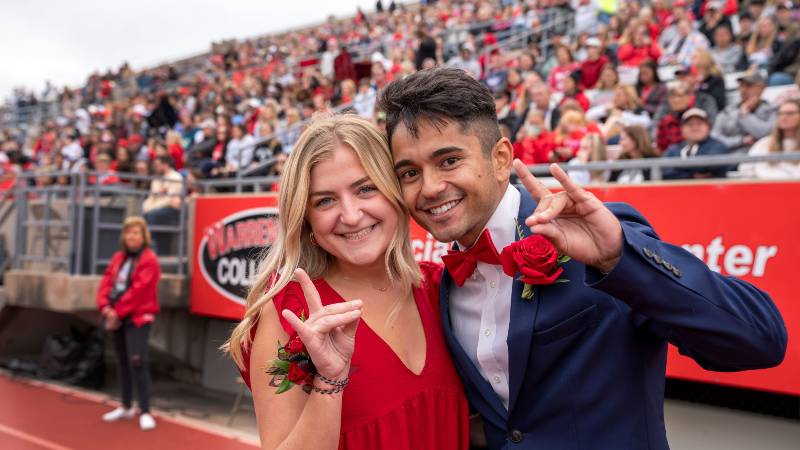 Homecoming Royalty Queen, left, Mallory Martinez, and Royalty King Alex Chase give a  snouts out" shoutout  to fans at the Mules football game.

Candidates for Homecoming Royalty participated in the parade, and were also recognized at halftime of the Mules football game on Saturday. Several other awards were presented to various organizations that joined in the parade. In the Community Division, there was a tie for first place by Photo Gym and Warrensburg Christian School, with Center Stage finishing second, and Twister Sports, third. Student organizations claimed three awards with Gamma Phi Beta and Delta Chi finishing first; Alpha Sigma Alpha and Alpha Tau Omega, second, and Sigma Sigma Sigma and Sigma Tau Gamma, third.