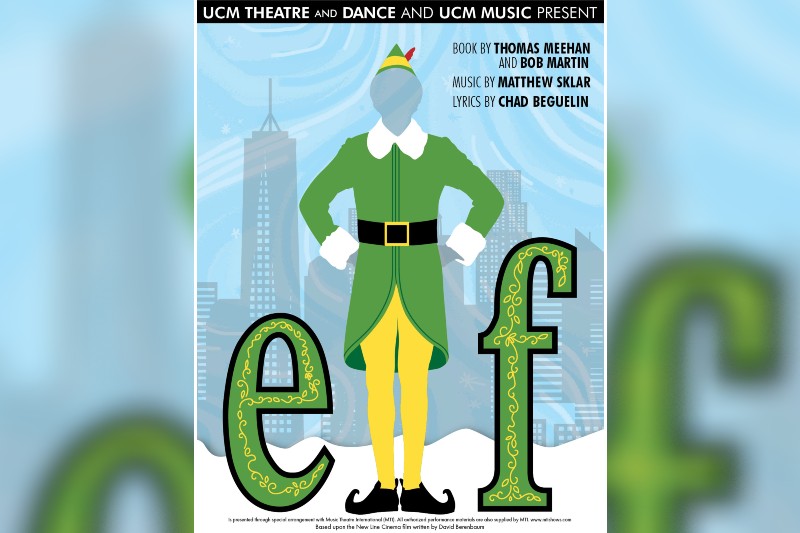 WARRENSBURG, MO – An entertaining warm-up for the holidays, the University of Central Missouri Theatre and Dance presents “Elf: The Musical,” with performances beginning Nov. 12.

Based on the popular Christmas movie of the same name, the musical follows the story of Buddy the Elf as he discovers what it means to be human. The play performs at 7:30 p.m. Nov. 12, 13, and Nov. 18, 19 and 20. An ASL interpreter will be be provided on the 18th.

During the play, a young orphan named Buddy mistakenly crawls into Santa's bag of gifts and is transported to the North Pole. The would-be elf is raised, unaware that he is actually a human until his enormous size and poor toy-making abilities cause him to face the truth. With Santa's permission, Buddy embarks on a journey to New York City to find his birth father and discover his true identity. Faced with the harsh realities that his father is on the naughty list and his half-brother doesn't even believe in Santa, Buddy is determined to win over his new family and help New York remember the true meaning of Christmas. This modern-day holiday classic is sure to make everyone embrace their inner elf.

When asked about the musical, Director and Choreographer Ashley Miller-Scully said that “’Elf: The Musical’ is a fun, joyful Christmas musical that is great for the whole family. If you love the movie ‘Elf,’ you'll love this musical and it will most definitely put you in the holiday spirit!”

The lead role of Buddy the Elf is played by Jace Nielsen, a junior Theatre Performance major  at UCM.  About the role, Jace said, “Buddy the Elf is such a high energy and fun character to embody, which makes ‘Elf: the Musical’ an immensely exciting show to be a part of. If you’re looking for some over-the-top fun and laughs, and/or you’re ready to get into the Christmas spirit, come see UCM’s production of ‘Elf: The Musical!’”

UCM Theatre and Dance will also be holding a toy drive for the duration of the run of the show. Community members are encouraged to bring new or used toys to the theater when they come for the show, or they may just drop them off in Martin 113 on campus between 9 a.m. and 4 p.m. Monday through Friday.  The toys will be donated to Toys for Tots.