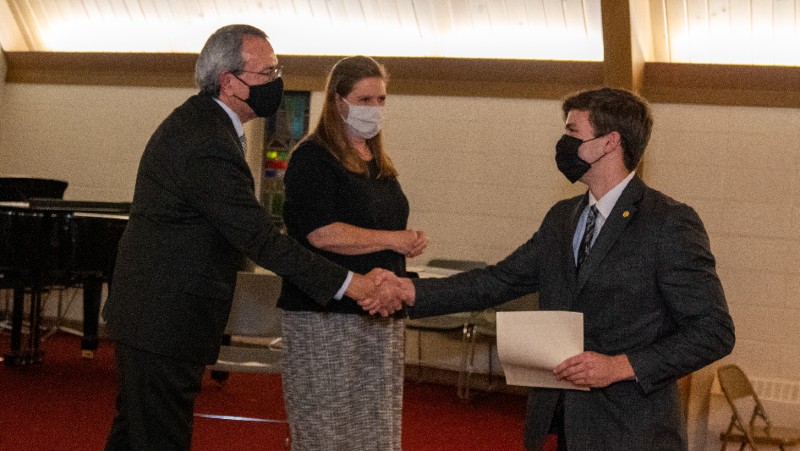 Senior criminal justice major Caleb Ross, Grain Valley, Missouri, right, is recognized by Jose Mercado, left,  dean of the University of Central Missouri Harmon College of Business and Professional Studies, and Lynn Urban, chair of the School of Public Services,  for several awards he received during the Lambda Alpha Epsilon  American Criminal Justice Association’s Region III competition. Among these honors was the Top Academic Award, which contributed to UCM’s 20th consecutive Sweepstakes Trophy, the highest accolade a team can achieve.

WARRENSBURG, MO – Recently speaking to a group of more than 30 students and a handful of current and past faculty members, Lynn Urban, chair of the University of Central Missouri School of Public Services, asked the gathering to look closely at a large display of regional and national trophies on a table in the UCM Alumni Chapel. While these awards collectively represented the unrivaled success of UCM’s criminal justice team, Urban suggested the audience take note of three recently updated trophies which she said likely went unnoticed amid the group’s recent regional triumph.

“How many of you knew there was a traveling trophy,” Urban asked in talking about the significance of each of those honors captured in competitions sponsored by the Lambda Alpha Epsilon (LAE) American Criminal Justice Association (ACJA).  Not surprised by her audience’s silence, she explained, “That’s because they haven’t traveled for 20 years.”

Among these honors is the LAE Region III Sweepstakes Trophy, which was recently updated to signify UCM’s 20th consecutive regional championship. The university’s Gamma Epsilon Delta (LAE-GED) chapter of the ACJA re-claimed this trophy, along with many new individual awards during the competition Oct. 14-17 in Garden City, Kansas. Colleges and universities from across Kansas and Missouri participated in the event, which also included four UCM faculty members and 28 students from UCM’s Department of Criminal Justice and Criminology. The team not only captured the top overall award, but its members also were recognized with honors such as the LAE Top Academic and Top Gun awards. These achievements were celebrated during an awards reception Nov. 9 that also highlighted successes over the past 20 years.

Team advisor Gregg Etter, professor of criminal justice, said the ACJA was established in 1937, and since that time UCM is the only chapter to win 20 consecutive regional Sweepstakes Awards. The university’s LAE-GED chapter also has the distinction of being the first and only team to win 18 consecutive national LAE titles, which UCM will seek to defend during the spring 2022 academic year.

In talking about the reasons behind the team’s success, Etter said, “A lot of that has to go to faculty, but the majority – the lion’s share  – has to go to the students.”

He praised students for the work  they have committed in areas such as academics, firearms, and physical agility that have contributed to them winning at the highest levels. The commitment of all individuals involved in preparing for and participating in these regional and national competitions was a common theme among the recognition event’s speakers.

“Twenty years in a row. That tells us a lot about your skills, your performance and your dedication to the University of Central Missouri, but also the dedication of your professors,” said Jose Mercado, dean of the Harmon College of Business and Professional Studies.
Mercado joined Urban in presenting certificates to UCM students and faculty who contributed to the team’s regional win. The competition included five academic exams on criminal law, policing, juvenile justice, corrections and LAE knowledge. Other competitive events dealt with knowledge and skills in crime scene investigation, physical agility, and firearms. There also was an opportunity for students to create academic posters to submit for judging.

Caleb Ross, a senior criminal justice major from Grain Valley, Missouri, was the LAE Top Academic Award recipient, based on his overall success in taking the academic exams, in which he finished first on three tests, and also achieved second- and third-place finishes on the remaining exams. Additionally, he placed third in the upper division firearms competition, both individually and as part of a three-member team; was first in the male category for physical agility; and first in the academic poster competition.

Asked about his success in the academic part of the competition, Ross simply noted, “You just go in, take the test, and trust God. That’s all you can do.”

He also stressed the support of individuals such as Etter, for his leadership in advising the LAE chapter; UCM Professor Emeritus Roger Pennel, for his work in assisting the campus chapter and the region; and the support of Richard Gillespie, an emeriti member of UCM’s Department of Public Safety who works with criminal justice students in providing firearms training. Gillespie set a good example as a competitor by capturing the 2021 Top Gun trophy in the competition which has a division for professionals.

Listed below is a complete list of UCM students and faculty members who finished within the top three in each division of the Region III competition, and the number of trophies earned in these categories: