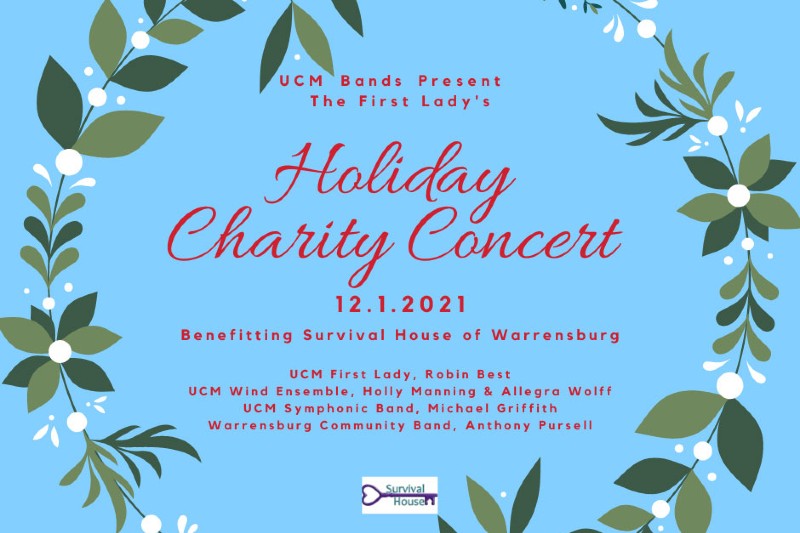 UCM First Lady Robin Best is working with UCM Bands to make this event possible. No tickets are required for the concert, which is free and open to the public. It will include a pre-concert reception featuring light holiday snacks and music, followed by the bands’ performances at 7 p.m. In addition to music provided by students, it includes an opportunity for individuals to help support Survival House through the donation of items such as winter wear, gifts for Survival clients or financial contributions to the organization’s general operating fund.

Those attending will learn more about Survival through a brief informational intermission with remarks by John Culp, a UCM 2020 Distinguished Alumnus and member of the Survival House Board. At the conclusion of the concert around 8 p.m. the audience will hear from Alisa White, executive director of Survival House, along with April Roller and Heather Jennings, members of UCM’s Office of Student Experience and Engagement staff.

According to Anthony Pursell, director of bands at UCM, the concert has transformed since 2017 from an end-of-semester band performance to a pops-style concert featuring holiday music from all three groups. Beginning the concert, the UCM Symphonic Band, under the direction of Director of Athletic Bands, Michael Griffith will perform Steven Reineke’s, “Merry Christmas, Everyone” and Alfred Reed’s rendition of the traditional folk song, “Greensleeves.” The Warrensburg Community Band, now under Pursell’s direction, will also perform two fun-filled holiday classics - Leroy Anderson’s “Sleigh Ride” and a collection of holiday cartoon music by Julie Giroux. Concluding the concert, the UCM Wind Ensemble, led by graduate assistants, Allegra Wolff and Holly Manning, will perform Chris Bernatas’ “Hanukkah Festival” and John Higgins’ “Christmas on Broadway.”

Regarding the students' role in the charity concert, Pursell noted, “The concert is completely student-centered. In addition to assisting with the concert logistics, the students are tasked with selecting the charity along with First Lady Robin Best and organizing the event along with the charity’s leadership. The students are engaged from beginning to end with Robin, members of the UCM Administration, local leaders, and the community. Upon graduation, these students will lead programs and become leaders in their own communities within their field of study. My hope is that this experience will afford them a heightened understanding of charitable giving and an opportunity to establish their leadership skills immediately for their community’s benefit.”

Survival House was formed in Johnson County prior to 1982 as an emergency shelter and provided a crisis hotline for victims of domestic violence. In order to respond to the community’s needs, Survival expanded services and moved to a donated shelter in 1997. In 2016, Survival began serving Henry County and opened a second shelter two years later. Survival now operates at four different locations including two facilities in Johnson County, a satellite office in Henry County, and the Outreach Offices in Warrensburg. All Survival services are free and confidential. Providing support for Survival also helps support university faculty, staff and students who are in need of services.

Visit the UCM Bands Facebook page to learn more about online donations or any changes in masks/face coverings, which are currently required at such indoor events at UCM. You can also learn more about COVID-19 protocols at ucmo.edu/coronavirus.

Individuals who want to know more about the concert should contact Pursell at apursell@ucmo.edu.