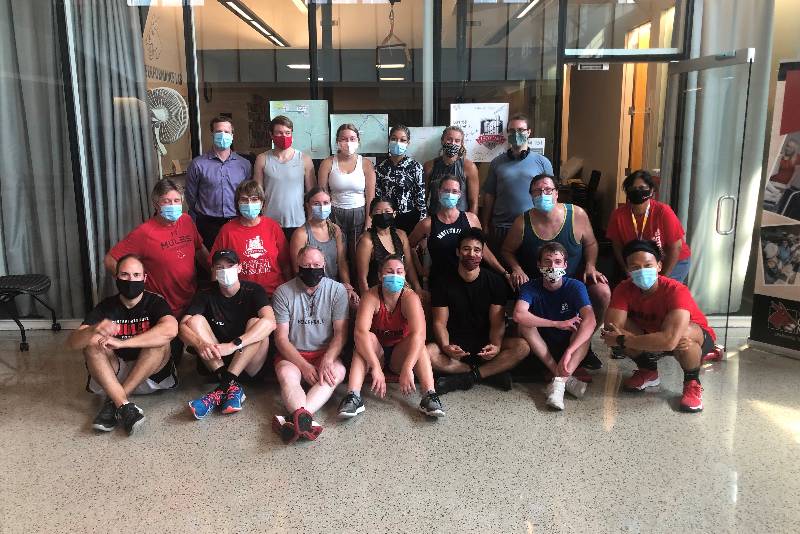 Faculty and students in the School of Nutrition, Kinesiology and Psychological Science gather for a photo during the 150 Celebration Team Challenge, creatively combining fitness with an opportunity to honor the university's sesquicentennial.

WARRENSBURG, MO – The University of Central Missouri School of Nutrition, Kinesiology and Psychological Science recently conducted an athletic event to promote health and fitness while honoring the university’s 150th anniversary. The event, UCM 150 Celebration Team Challenge, charged a group of students and faculty with the opportunity to simulate traveling 150 miles in 150 minutes with human power.

The team was tasked to remotely travel a 150-mile trail from the university to the state capital, Jefferson City. The trails were also designed to be similar to trails used by travelers 150 years ago, the year UCM was founded as the State Normal School for the Second Normal District. Three different transportation methods were utilized in the event; running across a trail, cycling across roads and rowing across a river. All three workouts were simultaneously practiced with a treadmill, stationary bike and rowing machine. Each station was operated by at least six athletes with the sub-teams swapping out members when necessary.

The simulated running route, Warrensburg to Windsor, totaled 33.1 miles. The cycling route, Windsor to Easley, clocked in at 88.9 miles and the rowing route, Easley to Jefferson City, filled in the remainder of the 150 total miles.

Despite setting high expectations for themselves, the team of seven faculty members and 13 students was able to achieve their goal early. Originally faced with a 150-minute deadline, the group reached the 150-mile mark in 130 minutes, just over two hours. This achievement was followed by a display of photos, maps and other materials in the Morrow Building, highlighting their efforts.

Members of the team, while participating in the challenge to celebrate the university, also hope to leave a positive impact on the College of Health, Science and Technology, which houses the School of Nutrition, Kinesiology and Psychological Science. The event, in part, was intended to provide an example for events they could initiate in the future or create for other students and faculty.

"We plan on doing more activities,” said Professor of Kinesiology Kevin Finn. “There is something called Exercise is Medicine on campus, which promotes physical activity. We anticipate sometime in the spring we will be doing something again.”

Alexis Raysik, a senior majoring in Kinesiology, echoed this sentiment, and also noted,“I hope that this inspires future students to come to UCM and join the Kinesiology department. They (faculty) work their tails off there trying to make the program as individualized for each person as it can be. They set us up to go into the world very well. I feel educated. I feel like I know what to do and I feel like a professional.”