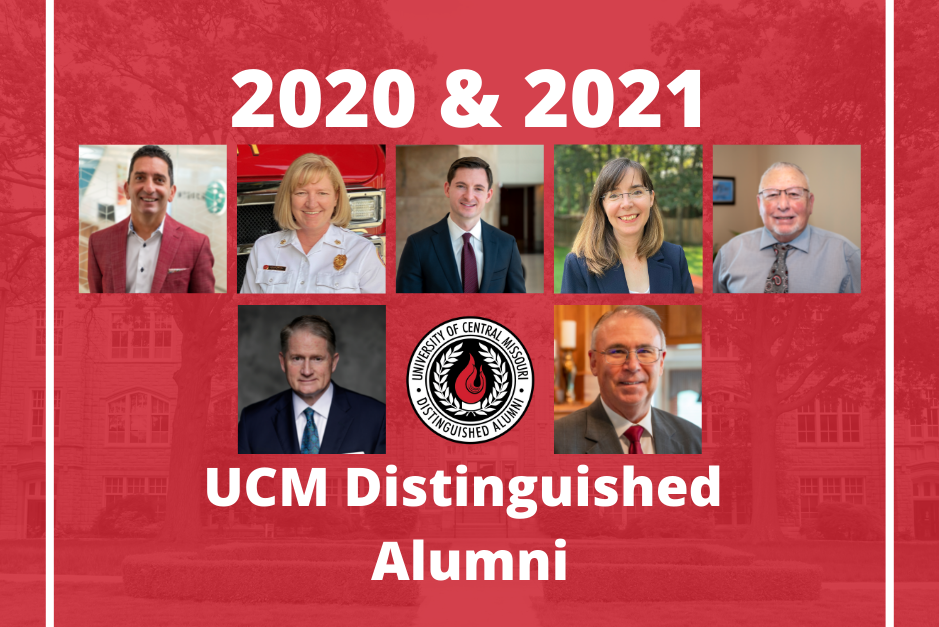 WARRENSBURG, MO – In recognition of graduates’ outstanding achievements, the University of Central Missouri will celebrate its 2021 Homecoming with the annual Distinguished Alumni Dinner at 5 p.m. Friday, Oct. 22, in the Sandra Temple Elliott Ballroom of the Elliott Student Union. Two individuals will be honored as this year’s Distinguished Alumni, and five alumni will be recognized as 2020 honorees. Those who register for the dinner (ucmfoundation.org/2021distinguishedalumnidinner) will be able to watch the program via livestream.

This annual awards program is sponsored by the UCM Alumni Foundation. While the number of individuals recognized each year varies, the Distinguished Alumni Awards recognize individuals who have exemplary achievements in their fields with national or global impact. Specific awards honor international alumni who have earned distinction, alumni who have excelled early in their careers and individuals who have generously shared their time, talents and resources to enhance the university and their communities.

The 2021 Distinguished Alumni are Russ Ball, ’81, and Joseph Dandurand, ’77. When 2020 Homecoming activities were impacted by the pandemic, traditional recognition of the outstanding alumni was postponed until this fall. The 2020 honorees and the classes they represent are Faruk Capan, Donna Lake and Melissa Willis, all class of 1992; John Culp, ’69 and ’75; and Derek Wiseman, ’11.

Russ Ball, recipient of the 2021 Distinguished Alumni Award, has had a 32-year career in the National Football League. His diverse experience has brought him to the pinnacle of the sport as executive vice president and director of football operations for the Green Bay Packers. Ball graduated in 1981 with a
bachelor’s degree in physical education from what was then Central Missouri State University (CMSU). From there, he became a graduate assistant strength coach at the University of Missouri in his hometown of Columbia, where he also assisted with filming practice. When strength coach Dave Redding accepted a job with the Cleveland Browns in 1982, Ball was promoted to Mizzou’s head strength coach at age 22, and served for seven years while earning his master’s degree in human performance. Redding and Ball reunited in 1988 as strength and conditioning coaches on Marty Schottenheimer’s inaugural staff with the Kansas City Chiefs. Ball worked for the Chiefs for 10 seasons, doing everything from operating the second end zone camera during home games to charting offensive personnel and signaling in defensive coverages. He joined the Minnesota Vikings in 1999 as senior football administrator, and after learning the nuances of the salary cap and player contracts, he honed those skills for a season in Washington before joining the New Orleans Saints in 2002. He was the Saints’ vice president of football administration, and after six seasons was hired in 2008 as the Green Bay Packers’ vice president of football administration/player finance. Now in his 14th season, he is responsible for negotiating player contracts, managing the salary cap and supervising numerous departments.

Joseph Dandurand, recipient of the 2021 Distinguished Alumni Award, lived in a suburb of Chicago before moving with his parents and six siblings to Missouri the summer before seventh grade. The family first resided in Holden, then moved to Warrensburg in 1970. He enrolled in St. John’s Diocesan Seminary School in Kansas City, but ultimately decided to pursue an accounting degree at CMSU, after which he completed his juris doctorate from the University of Missouri-Kansas City School of Law. Shortly after graduating from UMKC, Dandurand joined Warrensburg lawyer Kirk Rahm’s legal firm, where he practiced law until he was recruited to run for a circuit judge seat serving Cass and Johnson counties. At age 30, the minimum age for the position, he became the youngest circuit judge in Missouri history, and was re-elected in 1992, 1998 and 2004. Dandurand presided over many tough cases, including that of serial killer John Robinson and approximately 50 death penalty cases — all but one of which he helped resolve by guilty plea without a death sentence. In 2007 he was appointed to the Missouri Court of Appeals Western District, where he also chaired the Supreme Court Judicial Education Committee. After two years as an appellate judge, Dandurand became chief deputy to then-Missouri Attorney General Chris Koster. He retired this year as executive director of Legal Aid of Western Missouri, a nonprofit providing free civil law services to underprivileged clients. He now devotes his time to mediations and arbitrations with the Jay Daugherty Mediation Firm in Kansas City.

Donna Lake, recipient of the 2020 Distinguished Alumni Award, is the first female fire chief in the more than 150-year history of the Kansas City Fire Department (KCFD) and a role model for young women pioneering this male-dominated field. Lake, who chose to attend CMSU partly because it was close to home, graduated in 1992 with a public relations degree and graphic arts minor. She earned her Master of Public Administration from the University of Kansas and completed the National Fire Academy Executive Fire Officer Program. Lake has worked for the city of Kansas City for nearly 30 years, including a stint as assistant city manager for public safety. She oversaw nearly $40 million in upgrades to replace outdated fire trucks and ambulances and also upgraded three fire department facilities to gender-neutral standards. Before becoming fire chief in 2019, Lake progressed through the ranks of KCFD. She started as a firefighter, then became a training instructor and equipment officer. She went on to serve as division chief of hazardous materials, deputy chief of special operations, and incident commander in the joint command structure for the 2012 All-Star Game in Kansas City. In 2014 she was named assistant fire chief in command of the Technical Services Bureau.

Melissa Willis, recipient of the 2020 Distinguished Alumni Award, earned her bachelor’s degree in biology from CMSU while working at Cripps Pharmacy in downtown Warrensburg and Marion Merrell Dow in Kansas City. This experience, coupled with a strong lab component in her biology and chemistry coursework, set her on the path to a career fighting infectious diseases. After graduating in 1992 with UCM’s Distinguished Scholar Award, Willis earned her doctorate in pharmacology from Yale University and completed her postdoctoral fellowship at Harvard University’s Immune Disease Institute. She served as a senior research scientist specializing in bacterial toxins before signing on with the U.S. Department of Health and Human Services’ Biomedical Advanced Research and Development Authority (BARDA) in 2010. There she helped develop the only available treatment for patients suffering from botulism and a drug for patients infected with anthrax. Willis was promoted to influenza therapeutics chief at BARDA and partnered with Regeneron Pharmaceuticals to develop a multi-antibody cocktail against Ebola. In 2018 there was an outbreak in the Democratic Republic of Congo, and the drug, now part of the standard treatment for Ebola patients, reduced the mortality rate from approximately 70 percent in untreated individuals to less than 6 percent. These accomplishments influenced Willis’ decision to become a teacher at the Academies of Loudoun High School in Leesburg, Virginia, where she hopes her story will inspire young women to pursue science as a career.

John Culp, recipient of the 2020 Distinguished Alumni Award for Service, earned his entire education on the Warrensburg campus. A lifelong Warrensburg resident, Culp attended the Centrak Elementary School and College High School, graduating in 1965. He then enrolled at Central Missouri State College and earned his bachelor’s degree in physical education in 1969. He went on to complete a master’s degree in secondary administration in 1975 from what was then CMSU. Culp has lived his life with the three F’s in mind — Faith, Family and Friends — while also having a love for football. Shortly after leaving CMSU with his undergraduate degree, he began his education career at Warrensburg Middle School, where he was affectionately known by students and faculty as “Coach Culp.” Once he completed his graduate coursework, he went on to teach in Pleasant Hill and Harrisonville, Missouri. In 1986 he returned to the Warrensburg R-VI School District, retiring from the district in 1999. He continued to coach at Raytown South High School and then Blue Springs High School. He has also assisted the Warrensburg High School Tigers. In 2003 Culp was named student-athlete retention coordinator at UCM. He also served the university as coordinator of secondary field experience and student-teacher supervision and as an instructor in the Master of Arts Teaching Certificate program. Culp has further exemplified “Education for Service” by sponsoring Tau Kappa Epsilon fraternity and the Student Athlete Advisory Committee, and serving on the Survival House board since 2012.

Faruk Capan, recipient of the 2020 Distinguished International Alumni Award, took a risk leaving his native Istanbul, Turkey, to pursue an MBA at CMSU. Moving from a city with a population of 15 million to the small town of Warrensburg was a culture shock — but a decision he said he will never regret. After graduating with a Business Administration degree in 1992, Capan took a position at a major pharmaceutical company. In the late 1990s, he took another risk, launching his own business with little more than a big-picture vision and a single employee to manage the details. Intouch Group has since grown to become one of the leading independent health care marketing networks in the world, with eight offices across the globe and more than 1,300 employees. As founder and CEO of this full-service agency network based in Overland Park, Kansas, Capan describes his leadership style as “very growth-oriented … if I grow, everybody will grow with me.” As part of their 20th anniversary celebration in 2019, Intouch developed hygiene kits for the Ronald McDonald House and Heart to Heart International (HHI). When the pandemic began impacting the region, Intouch employees stepped up to support HHI with similar kits and contributions. As a result, Intouch donated $100,000 to HHI programs focused on training nonprofits in coronavirus infection prevention and control.

Derek Wiseman, recipient of the 2020 Distinguished Alumni Award for Early Achievement, is a federal prosecutor for the U.S. Department of Justice, leading his office’s response to large-scale financial crimes. He formed the foundation for his career at UCM. Growing up in Jefferson City, Missouri, Wiseman played a variety of sports and earned a track and field scholarship to UCM. He ran for the Mules until an injury during his sophomore year put an end to his days on the track but paved the way for greater civic engagement. Wiseman joined the Pre-Law Students Association and Mock Trial team. He also served the university as Student Government Association president. After earning his degree in political science with a philosophy minor, Wiseman continued his education at the Washington University School of Law. He graduated near the top of his class and landed a position at Husch Blackwell, where he learned from some of the best lawyers in the region and logged a record number of pro bono hours. In 2016 Wiseman became an assistant U.S. attorney, using the trial advocacy skills that he first developed at UCM to prosecute and ultimately dismantle some of the nation’s largest criminal organizations.

To learn more about the UCM Alumni Foundation’s Distinguished Alumni Award and to read about past recipients, please visit ucmfoundation.org/awards.