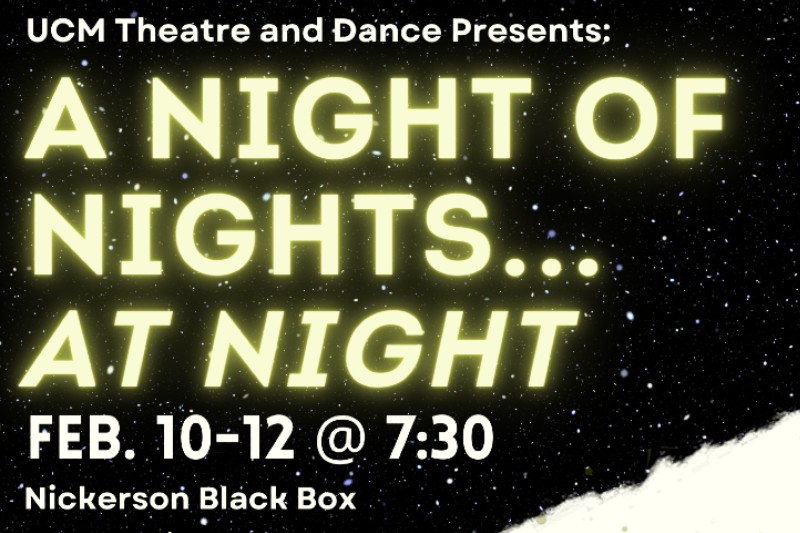 Enjoy a  collection of 10-minute plays as University of Central Missouri (UCM) Theatre and Dance presents Spring Studios 2022, “A Night of Nights…at Night.” These plays, to be performed Thursday, Feb. 10 through Saturday, Feb. 12, are directed by UCM students Luke Englert, Molly Ross, Anna Braman, and Luke Habjan, with university students as the cast.

Luke Englert is directing “Living in Fear” by Christopher Lindsay. Technical Director is Madison Skiljan. In the play, a group of people try to conquer their irrational fears. The cast includes Tijuana Hines-Bronson as Michelle, Miranda Muenz as Jill, Riley Given as Phil, Jace Nielsen as Dave, and Ryan Foster as Boris.

Molly Ross is directing “Unsinkable” by Michael McKeever with technical direction by Katie Harmon. In the play, a couple is in denial of the famous Titanic sinking and comedy ensues. The cast includes Emily Turner as Claire Wynder-Boyle, Riley Given as Harland Wynder-Boyle, Sapphire Engel as Maggie, and Luke Habjan as Officer Lowe.

Anna Braman is directing “The Audition” by Ray Arsenault with technical direction led by Brittany Brandt. A young actress has an interesting conversation with a bartender that is similar to the actress in one way or another. The cast includes Makenzie Lewis as Raleigh and Jace Nielsen as Rob.

Luke Habjan is directing “The Missing Link” by Emily Hagema with technical direction by Seth Holt. A father and son are in search of Bigfoot and their lost connection. The cast includes Quinn Allen as Calvin and Finn Juliano as Frank.

All Spring Studios 2022 performances begin at 7:30 p.m. with doors opening at 7 p.m. The plays are at the Nickerson Hall Black Box Theatre on the UCM campus.  Cost is $1 per ticket (cash only).  Masks are required for all audience members.