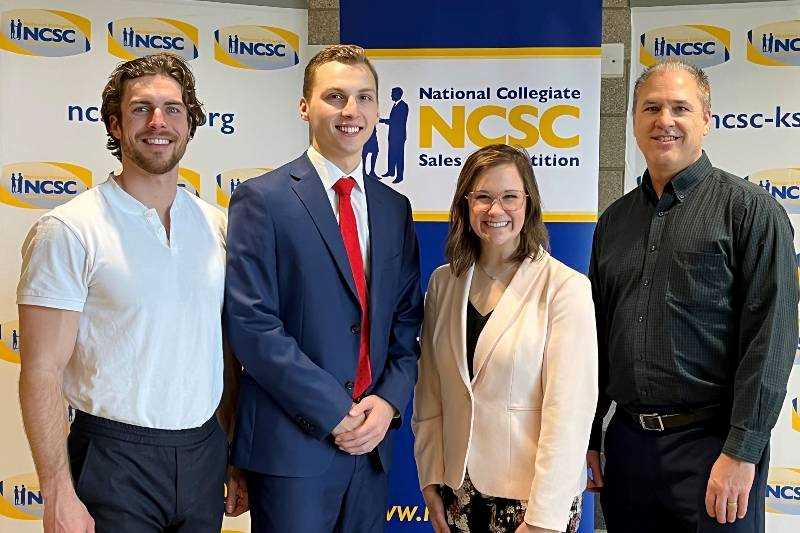 University of Central Missouri students from the marketing program, Jake Fesi, second from left and Josie Phillips, participated in the National Collegiate Sales Competition in March. Joining them at the competition at Kennesaw State University were faculty members, Tyler Hirlinger, assistant instructor of marketing, left, and Charles Schwepker, Randall and Kelly Harbert Marketing Professor in the Harmon College of Business and Professional Studies.

WARRENSBURG, MO – University of Central Missouri marketing students competed against some of the top students and teams in their academic discipline at the National Collegiate Sales Competition  (NCSC) March 4-7.  UCM represented the only team from a Missouri public university at the event hosted by Kennesaw State University in Kennesaw, Georgia. The NCSC is considered the largest and most competitive collegiate sales competition in the nation.

During the event, UCM was represented by the team of Jake Fesi, a senior from St. Louis majoring in marketing, and Josie Phillips, a junior from Kansas City with a double major in marketing and psychology. The UCM team finished 12th overall out of 67 participating universities. Fesi advanced to the semifinals, and tied for 15th place out of 134 collegiate competitors. Philips advanced to the quarterfinals, and finished in a tie for 41st. The team was coached by Tyler Hirlinger, assistant instructor of marketing, and Charles Schwepker, Randall and Kelly Harbert Marketing Professor in the Harmon College of Business and Professional Studies.

The NCSC was created in 1999. It provides a venue that allows competitors to sharpen their sales skills in a highly competitive environment while also providing networking opportunities with national and international peers. Additionally, the competition provides corporate sponsors an opportunity to network with high-caliber students who are skilled in sales, and possibly recruit them for jobs.

Some of the most prestigious institutions in the nation are part of this event. UCM and St. Louis University, a private institution, were the only Missouri universities represented at the NCSC in 2022, according to information posted on the event website.

Prior to the NSCS, Fesi and Phillips, and another marketing student, Gabe Combs, Lee’s Summit, in February competed in the Redbird National Sales Competition (RNSC) at the Professional Sales Institute at Illinois State University. In that event, which included 94 competitors from 38 universities across the nation, UCM finished fifth overall. Fesi advanced to the semi-finals (top 24) and finished in the top eight, and Combs and Phillips nearly missed advancing to the semifinals.