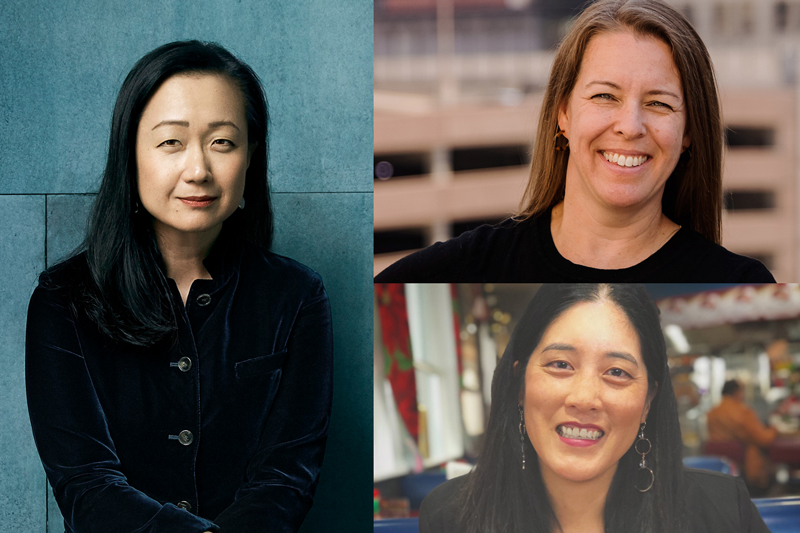 “NFB Presents: Epics of Memory” is a program coordinated in partnership with UCM’s School of English and Philosophy and “Pleiades” magazine that provides authors an opportunity to discuss how intergenerational memory, family, and place has shaped their writing. The program is free and open to anyone who would like to attend, however, those who plan to do so are encouraged to RSVP at the NBF website.

The program will be moderated by Anne Kniggendorfis, a staff writer and editor for the Kansas City Public Library. She is the author of “Secret Kansas City” and “Kansas City Scavenger” and is a regular contributor to Kansas City’s National Public Radio affiliate KCUR 89.3 as well as numerous publications throughout the metro area. She produces LitHub’s Fiction/Non/Fictionpodcast in addition to contributing articles that have been published nationally in “Smithsonian” magazine, “Publishers Weekly,” the “Saturday Evening Post,” and in numerous literary journals.

Min Jin Lee is a Manhattan-based author and journalist who wrote “Pachinko,” a 2017 NBF Fiction Finalist and a runner-up for the Dayton Literary Peace Prize. This book provided the basis for a drama series that premiered on Apple TV+ on March 25.  She also wrote the novel, “Free Food for Millionaires,” and her writing has been featured in “The New Yorker,” “The New York Review of Books,” “One Story,” “New York Times Book Review,” and “The Wall Street Journal.” Lee is the recipient of fellowships from the Guggenheim Foundation, the Radcliffe Institute of Advanced Study at Harvard University, and the New York Foundation for the Arts, which also inducted her into its Hall of Fame in 2019. She is working on her third novel, “American Hagwon,” and a nonfiction book, “Name Recognition.”

Victoria Chang lives in Los Angeles and is a Core Faculty member within Antioch University’s low-residency Master of Fine Arts (MFA) program. Her 2020 book of poetry, “OBIT,” longlisted for a National Book Award and was named a Finalist for the National Book Critics Circle Award and the Griffin International Poetry Prize. It also was named a New York Times Notable Book, a TIME Must-Read Book, and received the Los Angeles Times Book Prize, the Anisfield-Wolf Book Award in Poetry, and the PEN/Voelcker Award. Chang’s new book of poetry is titled “The Trees Witness Everything,” and her nonfiction book, “Dear Memory,” was published in 2021. Chang also received a Guggenheim Fellowship.

Individuals who have questions about this event should please contact Marc Joseph, professor of philosophy and chair of the UCM School of English and Philosophy, via email at mjoseph@ucmo.edu.