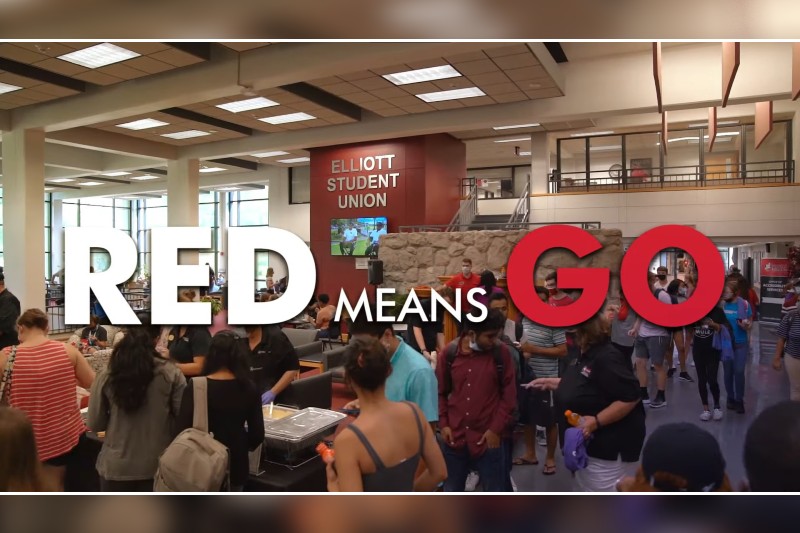 A University of Central Missouri digital video titled "Red Means Go" and a radio ad by the same name were among award-winning entries in two national collegiate advertising recognition events that were entered by Integrated Marketing and Communications..


WARRENSBURG, MO – In helping to promote the University of Central Missouri and its programs, Integrated Marketing and Communications has learned that it is being honored with 16 awards for its entries in two national competitions that recognize excellence in higher education advertising and marketing. Honors highlighting outstanding creative achievements were received in both the Educational Advertising Awards and the Collegiate Advertising Awards competitions, including submissions ranging from small institutions to some of the largest and most prestigious colleges and universities in the country and abroad.

“These awards validate the hard work and dedication of our IMC staff in collaboration with many individuals across campus who provided input into projects that range from items to help build our enrollment to strengthening connections with university alumni, friends and donors. I’m very proud to work with such a talented group of professionals who always strive for excellence. Their work is meaningful and helps the university move forward,” said Kelly Waldram Cramer, director for marketing and promotions in IMC.

She added that the awards highlight projects that are the collective efforts of staff designers, marketing specialists, an alumni communications manager, videographers, a digital media specialist and web personnel.

According to the Educational Advertising Awards website, this recognition program is in its 37th year. The latest honors, based on 2021 submissions, were drawn from more than 2,000 entries representing approximately 1,000 colleges, universities and secondary institutions from all 50 states and several foreign countries. Judges consisted of a national panel of higher education marketers, advertising creative directors, marketing and advertising professionals.

In the Collegiate Advertising Awards, UCM competed against similar-sized institutions that ranged from 10,000 to 20,000 in enrollment, although the number of total entries and institutions were not listed. After judging by a panel of industry experts, UCM received two Gold and two Silver awards. These honors and the project titles were as follows: Gold Awards - 12 Courts of Christmas Ad (sports-related ad), Magazine Advertising – Single Ad category, and Red Means Go Radio Ad, Radio – Single Ad category. Silver Awards were received for the Grow Your Own Future Series, Publication External Series category, and Homecoming Live Stream, Other/Miscellaneous category.