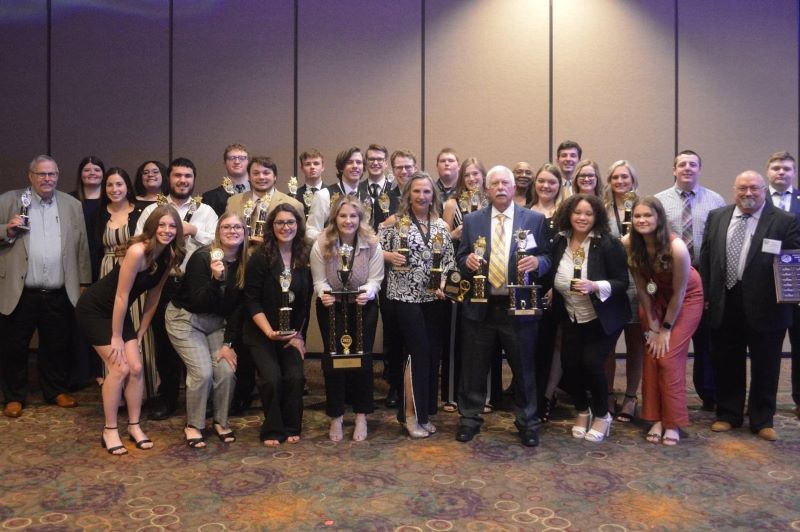 The University of Central Missouri's criminal justice team displays trophies that were awarded during  their 2022 national championship,
(Photo Submitted by Team)

WARRENSBURG, MO – Continuing a winning tradition, students and faculty members in the University of Central Missouri’s Gamma Epsilon Delta (GED) chapter of the Lambda Alpha Epsilon (LAE) American Criminal Justice Association (ACJA) recently captured their 19th consecutive championship in competition against some of the nation’s best collegiate criminal justice teams. Individuals who contributed to this history-making achievement were honored in a reception this week at UCM.

The Sweepstakes Trophy, signifying the team’s triumph as national champion, was one of 27 awards earned by UCM in the competition which took place March 21-25 in Kansas City. Because of the pandemic, this was the first LAE-ACJA national competition that has been conducted since 2019. The long delay, however, did not stop the university’s criminal justice team from accomplishing what no other program has achieved since the competition was founded in 1937.

During the awards presentations on April 19, the student and faculty competitors received certificates from Dr. Lynn Urban, chair of the School of Public Services, in addition to the opportunity to pick up trophies they had earned during the national competition. UCM President Roger Best also stopped by to commend the team on its success.

In her congratulatory remarks, Urban shared advice she had learned about how to achieve long-term success, which included tips about goal setting and a focus on how to keep doing better. She commended the group on its continuation of the longstanding win streak at UCM, and the important role each member plays in representing the institution.

While national championships are not the expectation, Urban hinted that there aren’t a lot of doubters on campus when it comes to the team’s chances to succeed. This confidence level was established years ago.

“After about five or six different years, we figured out that this wasn’t just one talented group of students. This was a culture, and we appreciate all of the hard work that happens with that,” Urban said. “You have all embodied that [belief] success leaves a path.”

Team Advisor Dr. Gregg Etter, professor of criminal justice, said there was “phenomenal” participation from UCM, which garnered a large percentage of more than 90 trophies that were presented among all of the collegiate competitors. Out of the total awards received by UCM, 14 trophies including two first-place, six second-place and six third-place awards were in academic areas covering Criminal Law, LAE Knowledge, Homeland Security, Juvenile Justice, Police Management and Operations. Additionally, UCM received nine trophies in Firearms, including five first-place, three second-place, and one third-place award. Major Richard Gillespie earned the 2022 Top Gun Award. The university received one first-place award in Crime Scene team competition and two second-place awards in male and female Physical Agility events. Rounding out the national contest, the team earned two second-place honors for Academic Papers and one second-place award in the Academic Poster category.

The names of specific awards and the team members who received them are provided below:

In addition to awards earned at national competition, four UCM seniors who are graduating this spring were honored at the conclusion of the awards reception. These individuals were Sam Espey, Caleb Ross, Taigan Rogers, and Nathan Sheehan.  As a team tradition, they were handcuffed together symbolically linking their ties to the UCM criminal justice team, and each of these graduating students also received medallions presented by LAE-GED chapter leader and team member Victoriah Shook. 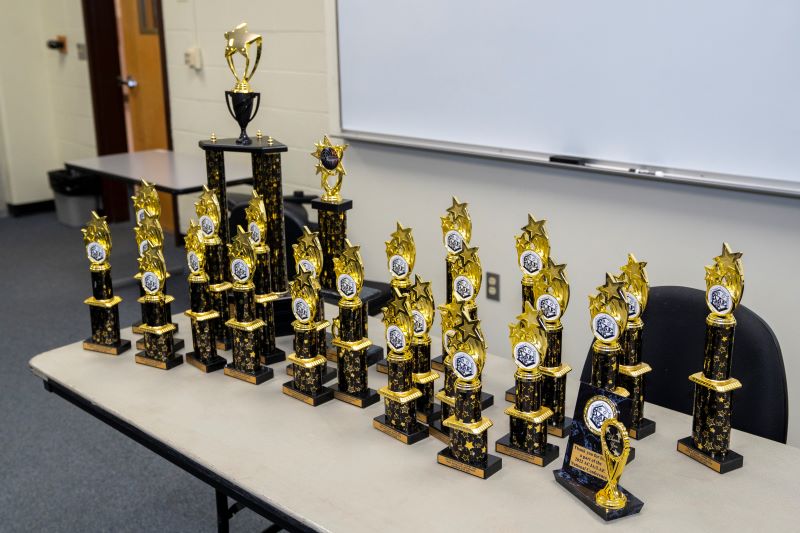