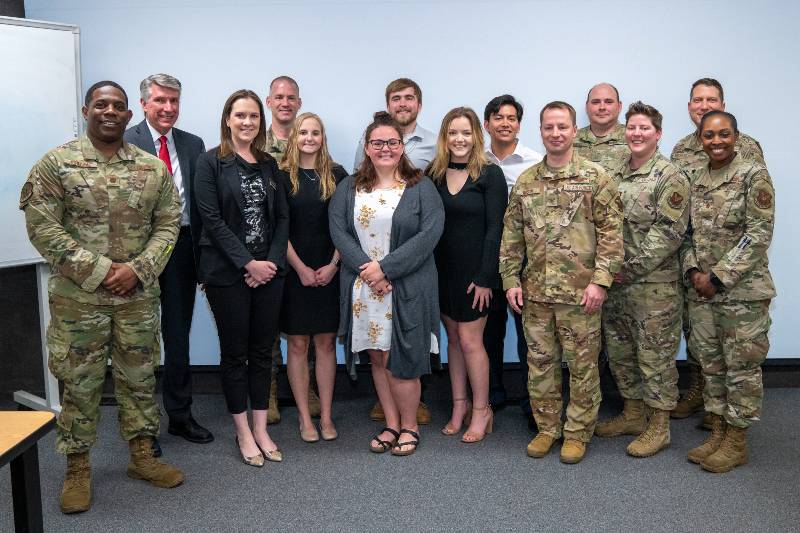 WARRENSBURG, MO – Students in the University of Central Missouri’s Design and Drafting Technology program recently engaged in a project that not only provided them with real-world experience but also supported the university’s strong relationship with Whiteman Air Force Base. Their presentation on the redesign of The Ozark Dining Facility at WAFB took place on April 29, bringing base representatives and campus members together to hear the students’ final proposal for renovations to a space they believe will positively resonate with users.

“The main purpose of The Ozark Dining Facility is to accommodate our service members living in the dorms,” noted Capt. Pamela Quigney, 509th Force Support Squadron, Sustainment Services Flight Commander. “Recently we opened our services to all base personnel to include officers, Department of Defense civilians, as well as their family members.”

The facility, which includes two dining rooms, serves an estimated 400 customers daily across four meal periods: breakfast, lunch, dinner, and a midnight meal, It is also the primary hub for serving military personnel during unit training assemblies and the annual tour for Guard and Reserve members to include Air Force and Army. It hosts distinguished visitor tours and is open for reservations for meetings and gatherings from different units and organizations.
With a desire to maximize the use of the facility, base personnel turned to UCM, where they found a group of students ready to apply what they learned in the classroom to a hands-on educational experience that will better prepare them for their future careers.

“Whiteman Air Force Base has a positive, long-standing relationship with UCM,” Quigney stated. “We thought that this could be a great opportunity for both of us to achieve mutual goals – to give the UCM students real-world design experience while simultaneously enhancing the quality of life on base by renovating our dining facility.”

Initial steps to launch this project began with Whiteman leaders and service members meeting with UCM faculty and students via Zoom in October 2021.  Five students from the spring Advanced Technical Problems in Design and Drafting Technology class worked on the project under direction of faculty advisor Lydia Dumont. The students’ involvement began in November 2021 with a tour of the facility, which also gave them an opportunity to take measurements which were crucial to the redesign. Part of the charge to the UCM student team was to help address concerns related to a need for functional seating, limiting general noise/reverb, providing stackable chairs and tables with wheels. The team also was asked to incorporate a fireplace and a dish return system for the project in addition to several upgrades that included installation of new flooring, windows, noise dampeners, wall art, décor and more.

During their presentation, the students noted that discussions with base members indicated a desire to create a welcoming space with a vibe similar to a Starbucks, which they strived to incorporate into their design proposal. Their PowerPoint highlighted a busy semester of work on various aspects of the project, including adhering to military and restaurant standards to create a final redesign project which the student team estimated would cost about $365,000. This is below the maximum $500,000 budget.

Students spoke briefly about the value of their experience this semester emphasizing their appreciation for the collaborative effort with WAFB, and the opportunity to learn through their work. They stressed that this project gave them a better idea about what to expect in their professional careers, while also contributing to a source of pride, having successfully delivered a product they believe will benefit those who reside and work  at the base.

“I definitely took a lot more pride in my work thinking it might come to fruition and it might be a real-life application, so I put a lot more effort into it,” Floresca said.

Wildt said getting estimates was a valuable experience. He also pointed out the benefits of using technology tools such as 3-D modeling software to help with redesign, a project element that got noticed during the formal presentation.

“I think this was a great real-world experience,” Rice said. “We actually got to work with a client, getting feedback in a back-and-forth situation, which is something we don’t always get in the classroom. A lot of times, you are given a ‘do-this type of assignment’ and you turn it in, and it’s over. But in the real world, you show them something and they say (as was the case with this project), ‘Hey, how about adding a dishwasher and a fireplace,’ so you have to go back and add them to the design.”

Dumont said students had an opportunity to share their project with other individuals prior to their final presentation. This only enhanced the quality of the experience.

“This was our third PowerPoint,” the faculty advisor said after the last meeting with WAFB personnel. “We presented to them the first of April in a preliminary meeting. We also presented it to our advisory board in the Design and Drafting Technology program just to show companies what our students are working on. Every iteration of the students’ PowerPoint has just gotten better and better, trying to make it look real professional, as well as the book that we printed for them.”

Various base members and other guests at the presentation received the booklet that contained information about the students’ proposal, including drawings, costs estimates, and other details needed to make the project come to fruition.

Quigney noted that “this type of project and community involvement enhances appreciation and respect between both parties.” She added that now that the redesign proposal has been provided, Whiteman, if it chooses to do so, can work with its contracting office to solicit bids from various contractors or vendors, then move into the construction phase of the project.

“If all goes as planned, then our vision of becoming a reality should happen by the end of the year,” she said.

Roya Azimzadeh, Ph.D., assistant professor and program coordinator for the Design and Drafting Technology program in the School of Technology, was among those in attendance. She expressed her appreciation for Whiteman Air Force Base working with students, and for the opportunity for UCM to be of service.

“In all, we strive to serve our communities and positively impact the quality of peoples' lives. We are grateful for the opportunity to serve and improve the quality of the Whiteman Air Force Base's dining hall to provide a warm and inviting environment and encourage a positive experience for their personnel,” Azimzadeh said.