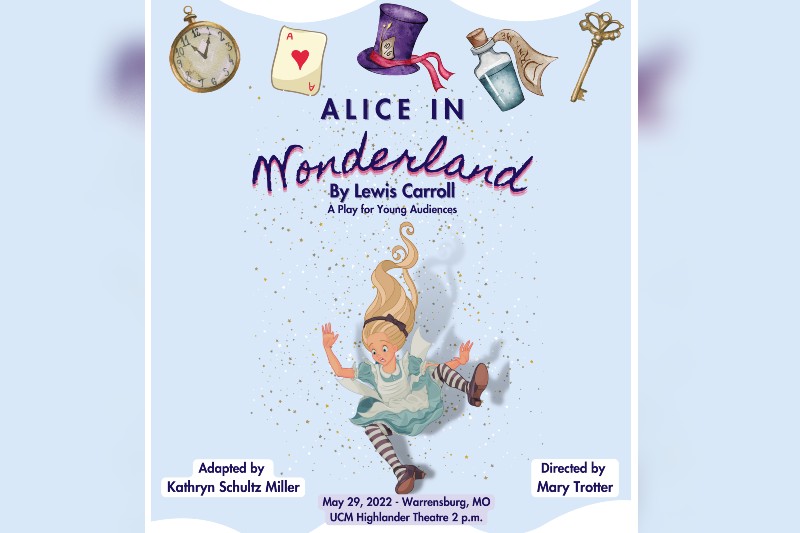 In this production of “Alice in Wonderland,” which is free and open to the public, all the famous characters are here. Along with Lewis Carroll himself, you'll see  Alice, White Rabbit, Cheshire Cat, the Mad Hatter and, of course, the Queen of Hearts. True to Carroll's original work, this remarkable adaptation appeals to audiences of any age. Full of adventure and audience participation, “Alice in Wonderland” is a light-hearted romp through childhood imagination, and is great entertainment for the whole family. “Alice in Wonderland” is directed by Mary Trotter, assistant professor of theatre in the Division of Theatre and Dance at UCM.

The company includes: Katie Marshall as Alice and Jace Nielsen as Lewis Carroll/The White Rabbit/Caterpillar/Pigeon/Cheshire Cat/Mad Hatter/Gardener/Queen of Hearts. Ashley Miller-Scully is the Production Manager/Producer for this show, Mallory Griffin is the Public Relations and Social Media Manager, Ansley Walker is Stage Manager, Seth Holt is the Scenic/Props Designer/Technical Director and Hollie Neumann is the Costume/Hair/Makeup Designer.

“Alice in Wonderland” is sponsored through the support of the Wetzel Family Foundation. This season marks the 38th anniversary of CMR bringing live children’s theatre productions to west-central Missouri.

Individuals who have questions should contact Ashley Miller-Scully (almiller@ucmo.edu) or Mallory Griffin in UCM Theatre and Dance at 660-543-4020.