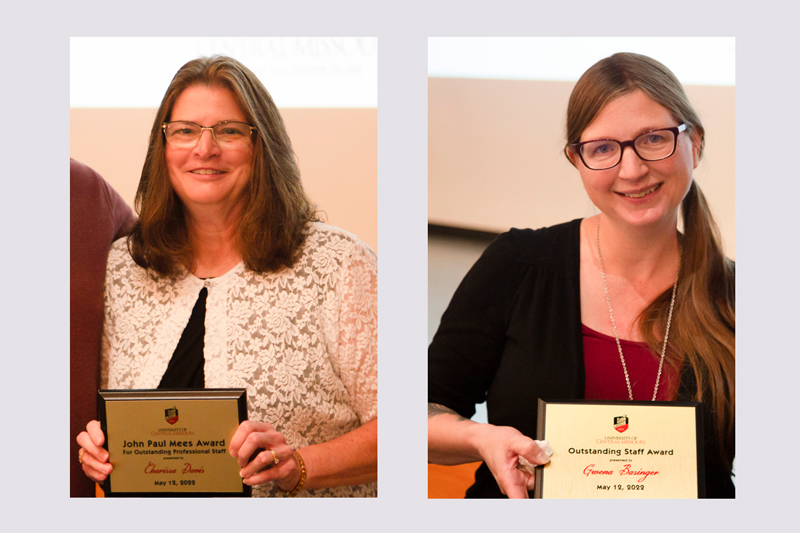 University of Central Missouri staff members Charissa Davis, left, and Gwena Basinger were honored with during a recent breakfast hosted by the Staff Council.

WARRENSBURG, MO – During an annual awards breakfast hosted by the University of Central Missouri Staff Council, two individuals who have made a positive impact on the institution were recognized for their exceptional service. Charissa Davis, assistant director of financial aid, was honored as the 2022 recipient of J.P. Mees Outstanding Professional Staff Award and Gwena Basinger, administrative assistant to the dean in the Harmon College of Business and Professional Studies, was presented the Outstanding Staff Award.

Individuals who were selected for awards were chosen on the basis of nominations from campus members that were submitted to the awards committee. By tradition, these award recipients are introduced by the individuals who received the awards the previous year. Darin Plummer, 2021 recipient of the J.P. Mees Award, and Claudia Wellhoff, 2021 recipient of the Outstanding Staff Award, made the introductions.

Also recognized during the breakfast were recipients of the Staff Council Educational Awards. These awards are presented to two staff members – one exempt and one non-exempt – who are pursuing their degrees at UCM. The awards are each in the amount of $250, and are made possible through donations to the UCM Staff Council. This year’s recipients were Schuyler Kemp, transfer coordinator in the Office of Admissions, who is pursuing a master’s degree in business administration at UCM, and Jen Skidmore, office professional II for development in the Office of Institutional Advancement and UICM Alumni Foundation. She is pursuing an executive assistant certificate at the university.

Mees passed away in 2000, and his wife, Joan, chose to honor his legacy by establishing an award in his honor. Joan Mees passed away in January 2019, and today her legacy of generosity is also recognized. The award named for J.P. Mees is given annually to a staff member who is classified as non-exempt and who has demonstrated outstanding commitment to UCM, the community, professional activities, and service to students.

Multiple individuals who nominated Charissa Davis cited her commitment and dedication to the Office of Student Financial Aid, including one noting that her “dedication to her job at UCM is second to none.” They added that she is known for coming into the office as early as 5 a.m., and despite rarely taking days off, she continues to work at home even when she is not in the office.

Davis provides strong support for the office director and its staff. She offers assistance in leading financial aid counselors to ensure that students receive financial awards and are served in the best way possible.  She not only plays a key role in the important work done by her office, but she also contributes to various committees within the office and the university, and helps advance her profession through her service with the Missouri Association of Student Financial Aid Personnel (MASFAP).

“Within the office, she leads by example and is always willing to help out where needed. Her dedication to her work and to those she works with make her an excellent candidate for the J.P. Mees Award,” a nominator stated.

She commented on her recent recognition noting, “I am extremely humbled and honored to receive the J.P. Mees Award.  Thank you to my colleagues for the nomination.  I truly work with some of the best individuals...not only in my office but across campus.”

“As the past J,P. Mees recipients have been named,” she added, “I was always inspired by their contributions made at UCM and aspired to one day be at that level.  At the end of the day, whether it be work or a smile, I hope that I have made a positive difference.”

The Outstanding Staff Award is presented annually to a staff member who has at least one year of service to UCM, and is a non-exempt employee. They also must demonstrate superior service to students, staff, faculty and community; model professionalism and a commitment to go above and beyond their normal duties, while also promoting teamwork and collaboration.

Basinger received multiple nominations for the Outstanding Staff Award, one of which noted, “When given a task, you can put your mind at ease knowing not only will the job be done on time, but it will be done right. She always has a smile on her face, promptly responds to all emails, and does a tremendous amount of work with humility and grace.”

Another nominator described her as "thoughtful" and "selfless," and commended her willingness to go above and beyond the call of duty to anticipate the needs of her co-workers, to deliver exceptional results, and provide superior customer service.  Basinger embodies UCM’s core values of learning, community diversity, excellence, opportunity and service.

“She ensures that all actions we take are in the best interest of our students so that they have the best learning opportunities possible. She ensures classrooms are well prepared, technology has been checked, supplies are ample, and that there are no room scheduling snafus,” a nominator wrote.

By her actions, Basinger demonstrates that all individuals with whom she works and serves feel equally valued, she is detail-oriented, and extremely well organized, ensures that search committee processes are representative of the college student body, and provides student workers with opportunities to grow while giving them projects to encourage their critical thinking and expand their skill set. She also encourages them to take initiative and has an excellent approach to giving constructive feedback, noted her nominators. One of them added, “Service above self is Gwena.”

“I feel truly honored to receive this special recognition. It is a privilege to work with such caring and dedicated individuals. Thank you to all who support and help serve our students, staff, and faculty at UCM. It takes all of us,” Basinger said.