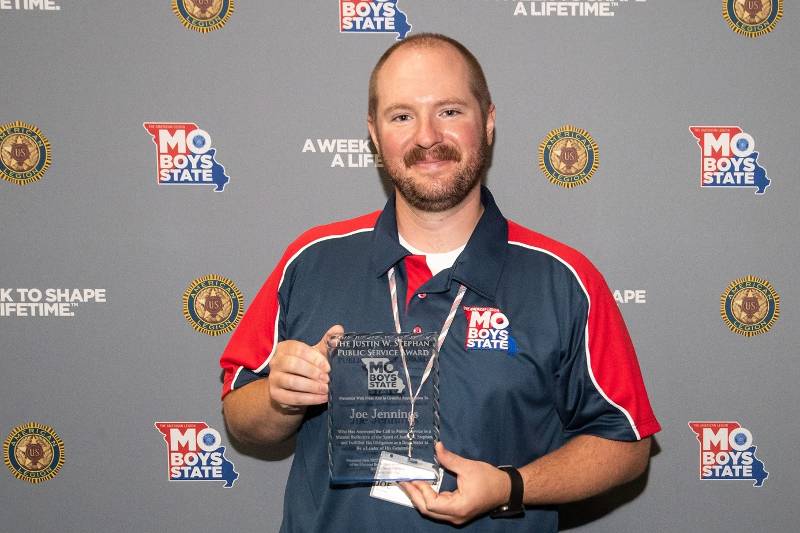 WARRENSBURG, MO – Sgt. Joe Jennings, a University of Central Missouri alumnus and member of UCM Public Safety, was presented the Justin W. Stephan Public Service Award from the Executive Committee of the American Legion Missouri Boys State, Inc. on Saturday, June 18, in St. Charles, Missouri. Jennings, whose work and love for public service exemplifies the spirit of the award’s namesake, was honored for his tireless public service to the state and community as well as to the Boys State program.

Named for Justin W. Stephan, who resided in Appleton City, Missouri, this recognition honors a Boys State staff member who demonstrates the ideals of Boys State by stepping into the arena and answering the call for service in their community. Stephan attended Missouri Boys State in 2000, and later served for 13 years on the program staff. He was instrumental in transforming the program’s Legislative School into one of the finest of its kind in the nation and was the founder of the Sons of American Legion Post 999. He also was proud of his hometown and the opportunity to serve his fellow citizens. At age 29, Stephan was elected mayor of Appleton City in 2012 and passed away unexpectedly in 2013.

A former Warrensburg High School student, Jennings attended Missouri Boys State in 2007. He returned to the program as a staff member in 2008 and completed his 15th year on staff in 2022. Jennings received many years of guidance and support from Stephan as a counselor in the Legislative School. He also served in various roles during his time on the Boys State staff and he currently volunteers with the program as an instructor in the Law Enforcement and Public Safety School. Like Stephan, Jennings was a charter member of Sons of American Legion Post 999.

Additionally, Jennings serves as a captain with the Training and Safety Division of the Johnson County Fire Protection District, while simultaneously serving as the district’s Public Information Officer. Within his role at the district, he oversees the Recruit Firefighting Training Program. He is also involved in many  organizations in his field. This includes being a member of the Professional Fire and Fraud Investigators Association, National Information Officer Association, Fire Fighters Association of Missouri (having served on three committees), and Missouri Fire Service Funeral Assistance Team. He previously served on the Johnson County Emergency Services Board as an elected official from 2016 through 2020.

Jennings also volunteered his time for many years at the Missouri State Fair, where he served as Battalion Chief and Public Information Officer from 2006-2015 on the fair's fire department.

Prior to joining UCM, Jennings worked as an Emergency Communications Operator at Johnson County Central Dispatch in Warrensburg.  He earned a master’s degree in College Student Personnel Administration from UCM and a bachelor’s degree in Public Administration from Missouri State University. Jennings is a native of Warrensburg, where he currently works and resides with his wife, Heather, who also is a staff member at UCM.