Six Months Into War, UCM Graduate Shares Her Story of Working With Orphans in Ukraine 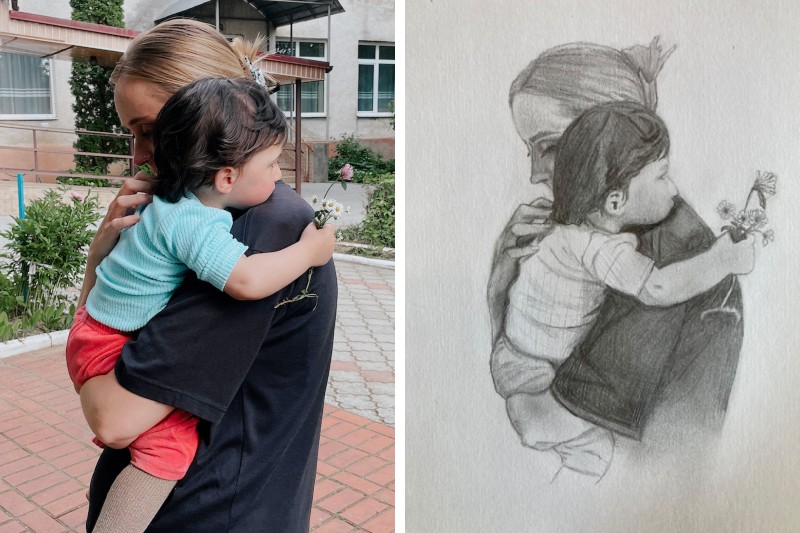 Above left, University of Central Missouri alumna Allina Robie holds a 2-year-old girl, who has two siblings in a different orphanage in Ukraine. Their mother was deemed mentally incapable of taking care of them, but also mentally incompetent to surrender the rights to her children. Allina is focused on getting them adopted because getting them home isn’t an option. The sketch of the photo was drawn by Madi Harrison, Allina’s friend who founded Artists Against Trafficking.

Having not yet acclimated to the eight-hour time difference since moving to western Ukraine at the beginning of February, Allina was up late the night of the 23rd when talk of closing Ukrainian airspace began circulating on Twitter. She stayed awake all night watching for news of the impending Russian invasion. Around 4:30 a.m. Feb. 24 she caught word of the first explosion, followed by another at the Kyiv International Airport. She texted her friends and called the state-run orphanage where she volunteered, but no one was awake yet. When dawn broke the sirens sounded, the news spread, and everyone was urging her to leave — just as the U.S. Embassy had been advising even before she arrived. The reason Allina stayed is the same reason her mother gave for coming to visit her in May, despite the ongoing war: “If it’s safe for you, it’s safe for me.”

“On the 24th I kind of had a moment of truth with myself,” Allina says. “If the kids at the orphanage were evacuated, I would try to find a way to go with them. … If these kids are going to be here, then I’m going to be here.”

The children were not evacuated, and Allina spent the next month helping get others to safety. In some cases, adoptive parents called the orphanage in an effort to help get their children’s birth parents out of the country. Other families were fleeing attacks in eastern Ukraine. Since men were called to stay and fight, families were often separated. Women and children traveling alone were at risk of human trafficking, so Allina arranged for trusted contacts in Romania, Slovakia and Poland to meet them at the border.

Thousands of children have been evacuated from Ukrainian orphanages since the war began. Before the war there were already more than 100,000 children living in state-run orphanages across Ukraine, and today the estimate is more than 120,000. In the eastern and southeastern parts of the country, where most of the fighting has taken place, some of those facilities have closed, and Allina has seen an influx of children being relocated to the orphanage where she works. Before the war she’d see one or two new children a month, but now there are two or three a week, including many infants coming directly from the hospital.

“Yesterday being Independence Day and the six-month mark of the war in Ukraine, my heart felt incredibly heavy,” Allina says. “Those of us working in orphan care will continue having to adjust to the increased need and fight for improvements in the systems of care.”

Allina primarily serves as an advocate for the children in the orphan care system, working to see them reunified with their families or brought into a family through adoption or foster care. Many children living in the orphanages are not eligible for adoption and often get stuck in the system.

“There should be steps in place to lead to reunification with the family or to adoption,” Allina explains, noting that some children remain in orphanages until they age out and find themselves at high risk of poverty, incarceration and human trafficking. “The orphan crisis is so broken, it’s like an onion. As soon as you peel off one layer, you find more and more brokenness within the system.”

Allina first learned about the orphan crisis on a World Race mission trip that took her to 11 countries in 11 months. Ukraine was ninth on an itinerary that included Columbia, Ecuador, Peru, Indonesia, the Philippines, Vietnam, Cambodia, Thailand, Moldova and Spain.

“When I first got to Ukraine there was something in it that felt like home,” Allina says. “Seeing the orphans activated something in me that this is something I can do. This is a problem that doesn’t just have to break my heart and make me sad and sorry; it’s something I can actually address and tackle. That’s such a hard thing to find.”

Growing up in Camdenton, Missouri, Allina says the emphasis was on the local versus the global community. She was first introduced to a global perspective when she visited her grandparents doing missionary work in Belize. The summer after her sophomore year as a first-generation student at the University of Central Missouri, she took a trip to the Netherlands to study international communications. She returned “activated,” knowing that her original career plan to become a high school teacher would leave her feeling confined and restless.

After graduating from UCM in 2017 with a degree in English, minors in Marketing and Creative Writing and experience working at both the Honors College and UCM’s Pleiades Press, she was ready for another adventure overseas. After the World Race trip she spent a few years working in marketing, then returned to Ukraine in 2021 and was reminded of her calling. She made the decision to move overseas and arrived in Ukraine on Feb. 1, 2022. Allina had been in the country less than a month when her new world literally came crashing down around her. Despite the loss and chaos, there’s nowhere else she’d rather be. She now understands that the cost of war is not just death but also lives in crisis. The effects are far-reaching — for example, children who are starving in Northern Africa, a region that relies heavily on Ukrainian grain.

“This broke my heart on February 24th, and I’m going to allow it to continue breaking my heart until we see victory,” Allina says, adding that she is fighting for both the children and the place she now calls home. “I have faith in the Ukrainian military, the Western support and those advocating for Ukraine — but I also have to be realistic in knowing this war could continue for the months and years to come.”